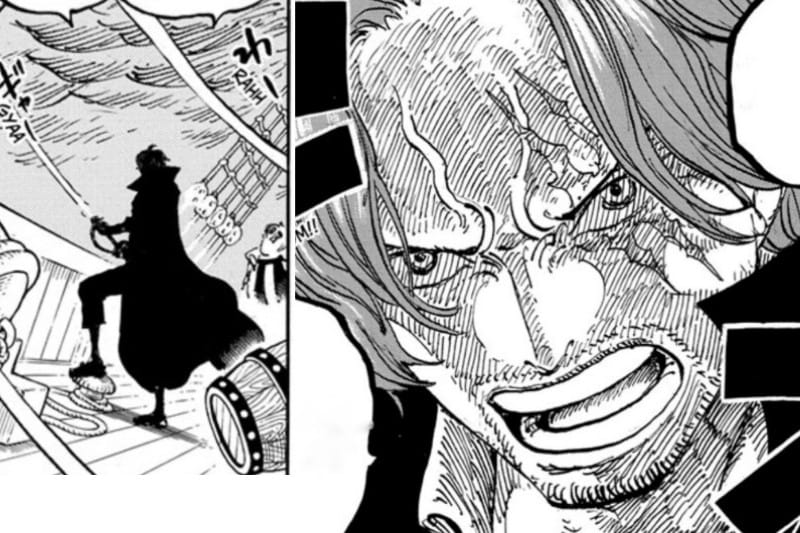 One Piece Film: Red, the 15th movie of the One Piece franchise released on August 6th, 2022. Volume 4 Billion was given free to those who watched the film. The “Volume 4 Billion” is referenced to Shank’s bounty, which is roughly 4 billion. The author of One Piece, “Eiichiro Oda,” has implied that Shanks has his own plan for this new era.

Shanks has a daughter named Uta, who is the central figure of this movie.

So, what will be his plan? One Piece Film: Red and “Volume 4 Billion” have unveiled so much information about Shanks and Red Hair Pirates. So, here we will discuss Shanks’ real name, family, past, and crew.

Shanks’ Family and Past

Shank was found by Gol D. Roger and his crew in a treasure chest that was stolen by Roger during the God Valley incident. Shanks was one year old when he was found. Sometime later, he befriended a fellow apprentice named Buggy, who would end up becoming a Yonko alongside him in the future.

They both used to fight against each, and their arguments were used to be silly. One of the funny moments is that they were arguing about which pole was colder, the North Pole or the South Pole. They continued to argue until Rayleigh spanked them on their head. There were many incidents, including them both.

While on Roger’s crew, they fought against Whitebeard Pirates. After the fight ended between both the crews, Buggy noticed that Marshall D. Teach, also known as Blackbeard and one of the most terrifying in Yonko in the future. He pointed out to Shanks that despite our age, he never slept, and probably he may never sleep in his life.

Later after Roger’s pirate disbanded, Shanks was present at his captain’s execution. He was in tears after his captain was executed. Afterward, he offered the Buggy chance to join his crew, but he refused. At some point in his life, he reencountered Blackbeard, who left him with three scars across his left eye. Shanks also share a rivalry with Mihawk.

At the age of 27, his bounty was 1.04 billion bellies, where he had already made a crew and name for himself. It was the same time when One Piece initiated.

Shanks also has a daughter named Uta, who is not his biological daughter. He found her in a treasure box. We have discussed Uta and Film Red more in the article mentioned below.

In the movie, many divulgences were revealed, such as Shanks belonging to Figarland Family. There is a high probability that the Figarland Family is one of the 20 Royal Families who formed the World Government. During the God Valley incident, Gol D. Roger took on Rock D. Xebec, and Xebec was the person who wanted to conquer the entire world. Roger allied with marines, which Monkey D. Garp led to saving Celestial Dragons and their slaves.

Rocks probably kidnapped Shanks at that time to blackmail the Celestial Dragons into keeping him hostage. But he was defeated by the combined efforts of Roger and Garp. It is highly probable that Roger accidentally found Shanks in the treasure box.

This may give us an insight into why Sengoku stopped the war during Marineford, and Gorosei granted him the audience.

The whole concept has clearly opposed the theory about Shanks being Rocks’ son who desires to rule the world and is also a member of “D.“

That’s why he can use a supreme level of Conqueror Haki that is enough to sweat even an admiral. Undoubtedly, like Doflamingo, Shanks’ bloodline is also very powerful, like a true king. And being a celestial gives him the advantage of meeting the Five Elders and demanding his rights.

It also pinpoints the panel of Gol D. Roger when he was returned from the Laugh Tale. He said something to Shanks, and he started crying. Many theories estimated that he told him his real identity and said the last treasure, “One Piece,” was not for him.

As we know that only a member of D can reach it, and it makes Luffy the sworn enemy of Shanks. That’s why Oda sensei mentioned that Shanks has his own plans for the future generation. So is he evil, or is he good? Only time will tell.

Strongest Conqueror Haki in One Piece

Shanks has the strongest conqueror Haki in One Piece. He is known as the killer of the Observation Haki who doesn’t let his opponent see through the future. His Supreme King Haki blast is powerful enough to coercion Admiral Aramaki into leaving Wano from a far distance, and in Film Red, he can sweat both Admiral Fujitora and Kizaru with it. Even Kizaru said, “So this is the Haki of Yonko Shanks.”

During his meeting with Whitebeard, the entire crew got fainted by Shank’s Haki. Even during the Marineford arc, when he rescued Coby from Akainu. There was fear in his eyes when he saw Shanks, and most of the marines got afraid when Shanks made his presence during the arc.

In One Piece World, there are only a few Conqueror Haki users. It is a type of Haki that cannot be attained by training, unlike the other two. One in a million people are born with this Haki.

In addition, Shanks can also control his “Sign of Presence” detected. It means he can pretend to attack somewhere even if it’s not the case, hiding his true intentions.

All Information about Red-Hair Pirates 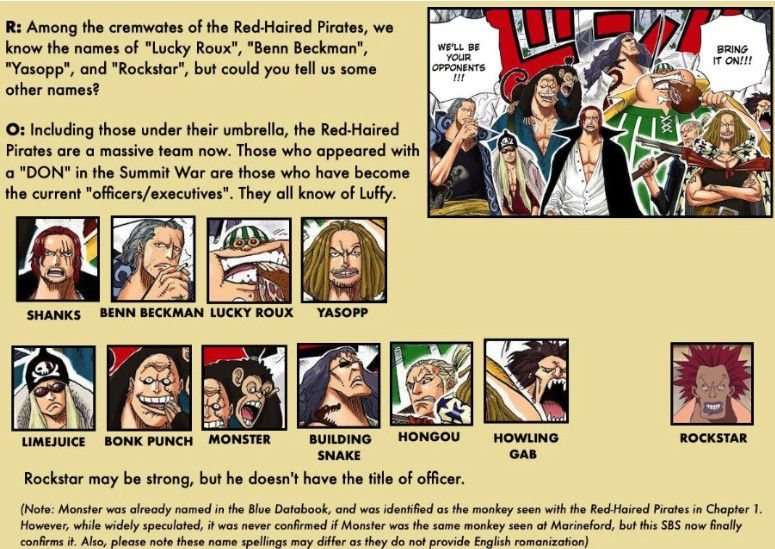 He is the first mate of Red Hair Pirates. In chapter 1, we saw his physical strength when he single-handedly annihilated the Mountain Bandits. He is good at Haki and can take on Admiral Kizaru with ease. His shooting skills are top-notch as he is good with rifles. He is the most popular among women. in addition, he can also grap bullets with his hands.

He is the father of Ussop and sniper of Red Hair Pirates. Yassop never misses his mark and is good at dancing. He has a very powerful Kenbunshoku Haki as he was able to communicate with Uta’s World.

He is the cook of the crew. During the fight against the Mountain Bandits, he killed the bandit who pointed the gun at his Captain’s Head. He is skilled at using Haki and attacking like a bowling ball. Maybe he has some kind of paramecia abilities.

They are both the musicians and officers of the crew. Monster is a large monkey who always sits on the shoulder of Bonks.

He is an officer of the crew who fights with an electric stick. He is an expert of Armament Haki.

He is the doctor and officer of the crew. So, he is familiar with the weapons that can rip apart any weapon instantly. He generally loves a clean environment.

He is the officer of Red Hair pirates who attacks opponents using cutting howling.

He is the navigator of the crew. He is a mix of Zoro and Sanji as he attacks using stomping kicks and fights using acrobatic juggling two sword style.

He is a relatively new member of the crew. Rockstar has a strong sense of justice. He attacks with his smashing sword style, where he digs a hole with his sword like a drill.

Here we conclude our article on “Shanks’ Real Name & Past in One Piece,” along with a brief explanation of Red Hair Pirates. We hope you like this post. We will update this post in future as per the latest information. Till then, stay tuned with us and read other articles mentioned below.