Skip to contentHome » Anime & Manga » Aizen vs Madara Uchiha: Who would win and why? 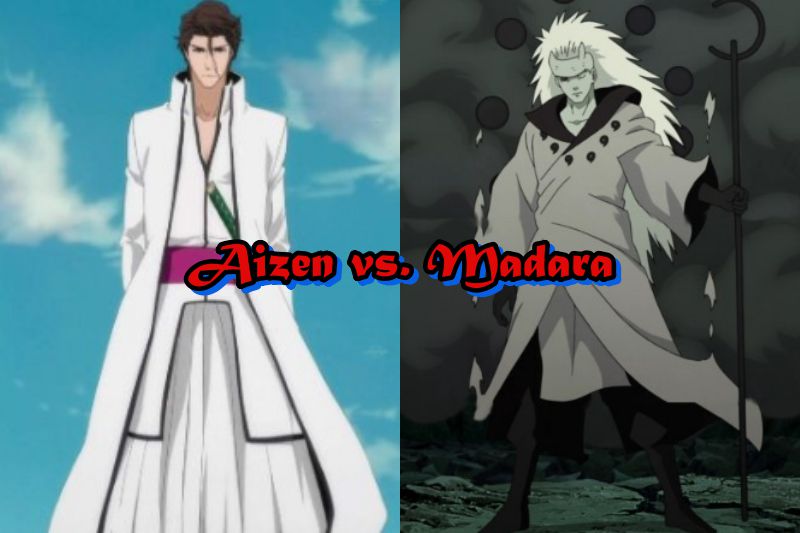 Two of the most impactful and powerful villains in their respective universes, feared by allies and foes alike, Sosuke Aizen and Madara Uchiha. Both of these villains have created history with intricate showcases of their abilities and their strength.

Coming to a battle of Aizen vs. Madara Uchiha, Aizen would end up emerging as the winner, even if Madara will put up an interesting fight with all his abilities and how closely similar Madara is in terms of power level to Aizen.

Aizen is constantly evolving with his Hogyoku, his raw abilities and his techniques, which was stated when Shinsui said Aizen was even stronger after being defeated by Ichigo, even after being restrained. Later in this post, we will take a detailed look at Aizen and Madara’s powers and abilities.

Aizen is undoubtedly the strongest character in Bleach, possessing broken abilities and Shikai and still defeating many of his opponents with mind games. He showed off his powers many times, even after being held as a prisoner of the Seiretei.

Gin himself stated that it wasn’t because of his Shikai; Aizen was powerful, but rather his usage of all his abilities and his intellect and confidence in fights.

Faster than lightning, his terrifying speed looks like he teleported to a different location. Possessing monstrous physical strength and a perfectly skilled swordsman, no one could Aizen in a swordfight.

His immense Reiatsu is even stronger than Yhwach. He reaches the whole of Soul Society in a few seconds, alerting everyone of his presence while checking the gates of Hell, a different dimension entirely.

Madara was the strongest Shinobi, only second to the first Hokage Hashirama and further grew stronger than his friend after being resurrected. He is the strongest of the Uchiha clan, proficient in all elemental Jutsu, Ninjutsu, Taijutsu, and Dojutsu, and a master with his set of weapons.

He has an enormous amount of Chakra, a master hand-to-hand combatant, awakening Mangekyo Sharingan at a very young age, as well as possessing a unique set of abilities for his eyes only, awakening Eternal Mangekyo Sharingan and a powerful enough Susanoo. He further grew more powerful after taking the Ten-tails beast under his control.

Aizen vs. Madara Uchiha: Who would win & Comparison

It is a tough fight to compare some of the best illusion masters in their respective universes, but it might look like the scales tip more in favor of Aizen than Madara.

Even if both of them are effectively immortal beings, there is still a surefire way to kill Madara, which Aizen can exploit, but there is no such way for Aizen to die or get killed in battle.

Aizen cannot fall prey to Madara’s genjutsu, as he is already under the illusion of his Kyoka Suigetsu. Aizen did this as he wanted his opponents to feel despair and will also be unable to exploit any shortcomings of Aizen.

The only flaw Aizen showed in the whole series was arrogance once he fused with the Hogyoku and became immortal, and these were the only times Aizen was defeated. Madara does have a good fighting chance with Izanagi and Susanoo, but his genjutsu and Tsukuyomi are for naught in this battle.

Aizen wins this round by a close call, as he was able to catch a blade from a Susanno kind of Bankai by Captain Komamura with his bare hands.

He was also able to withstand Ichigo’s strikes which broke mountains from just the shockwave alone. Aizen’s Reaitsu pressure was harmful enough and injured people fatally.

Aizen’s fusion with the Hogyoku further elevated his power up some levels and strengthened his other abilities.

Madara, on the other hand, displayed his feats in his battle with Guy might after unlocking his eight gates, but the former fought bare-handed for most of the series and still withheld from showing his real strength and mastery of other abilities.

Another close call for Aizen; he wins this round with his speed on the range of teleportation, which lets him dodge attacks from point-blank range and re-appear in front of the enemy.

Aizen was able to dodge the lightning strikes from Candice, while having his power restrained. It was also stated that Aizen is more powerful and faster than Hikone, who was portrayed to be the fastest character and the next Soul King candidate.

His spiritual pressure spread throughout the whole Soul society and destroyed all of the black creatures spread over the Seiretei in an instant, which was not even his full power.

Madara has a vast number of abilities up his belt for any kind of situation and has the power to fight in many ways, devising a battle favored to his situation. Aizen, on the other hand, has a limited number of abilities, which is next to none, and he further elevates the usage of these techniques with his Reiatsu.

His Shikai alone was so powerful that even after Yhwach fused with the Soul King and unlocked the Almighty power to see the future, still fell prone to the effects of Kyoka Suigetsu, and predicting that Aizen’s Shikai would not work on him.

Now, his Zanpakuto has been broken, there is no way left for his foes to break free from his illusions. As actions speak louder than words, Aizen’s actions prove why he is the superior of the two.

Gin also mentioned during the fake Karakura town arc that it was because of Aizen utilizing his abilities and his intelligence he stands on top, not because of his broken abilities, and no amount of preparation will be of use while facing off against Aizen.

This is a rather tough battle, as both of the characters are essentially immortal in battle due to their regenerative abilities. Aizen was able to tank one of Ichigo’s strongest attacks, Final Getsuga Tensho, and was able to instantly regenerate.

Even after getting impaled and his left arm cut off by Yhwach, he could instantly restore himself, even with his power being restricted, and was still alive.

Madara is nothing short, as he also has Hashirama’s cells imbued in his body for a faster regeneration, which helped in many of the major battles.

But he met his end when he became a vessel for Kaguya Otsutsuki, and the tailed beasts were freed from him. This means that there was still a way to counter Madara’s immortality.

Aizen, on the other hand, even survived a point-blank blast of Kurohitsugi spell, one of the strongest spells on himself, to free himself from the chair and came out unscathed.

This shows his increased durability and regenerative powers, and it was justified that even Shunsui’s Bankai would be unable to finish off Aizen. As of now, there is no way to kill Aizen, which was accepted by many of the captains.

This should make it clear enough of a proof that Aizen is the more durable of the two, as there is no surefire way to kill him.

Concluding a match between Aizen and Madara, it looks like the former would be the winner by a small margin, and both of the characters have many tricks up their sleeves and tactics when push comes to shove.

Aizen was so confident throughout the series that he never once revealed his Bankai nor teased us about his abilities, dealing with everyone on his way with his Shikai and skills alone. Aizen shines more with his durability, abilities, speed, and raw strength. Here, we conclude this article.