Skip to contentHome » Anime & Manga » Ichigo vs Saitama: Is Ichigo Stronger than Saitama? 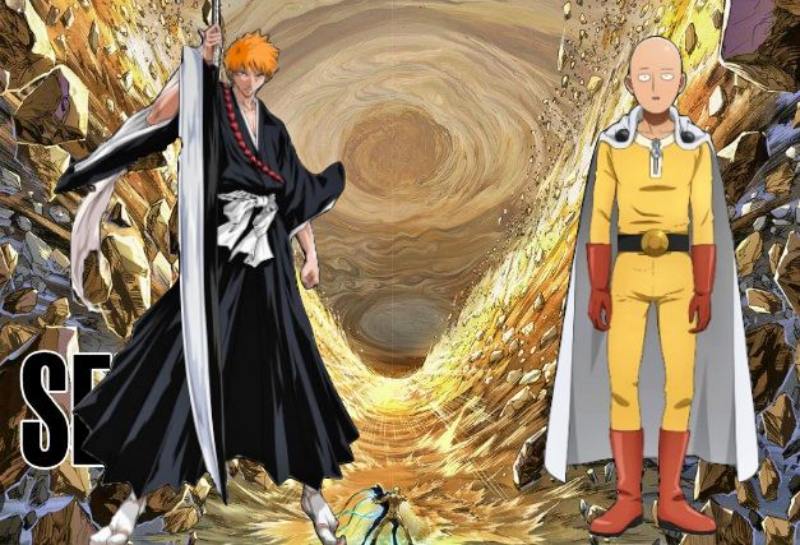 Ichigo and Saitama are the main characters in their universes, Bleach, and One Punch Man, respectively, and have achieved a lot of feats, which bodes the question, is Ichigo stronger than Saitama?

A short answer to this question is no, Ichigo is not stronger than Saitama. Even if both of them have defeated entities in their universe who possess god-level power, Saitama comes out on top with all his showcases of strength, speed, and durability.

Saitama is one of the most broken main characters ever to exist, and with these recent chapters, that has been proved to us when Saitama accomplished the feat of punching Garou back in time, which essentially did not even count as one punch. Later in this post, we will look at both characters’ abilities and powers.

Ichigo is a unique main character who achieves his peak power level right at the end of the series. That was when Ichigo came to terms with himself and embraced all his forms, making him strong enough to defeat a God.

Being one of the strongest characters in the series, his powers are an amalgamation of his Quincy, Hollow, and Shinigami nature.

With his power and abilities, he can put up great and visually appealing fights, which were already displayed in the series. Possessing a gigantic amount of Reiatsu, his Reiatsu comes on par with that of Aizen.

With strength, super speed, and durability, Shunpo master, an expert in martial arts, and with the sword, Ichigo puts all these innate powers efficiently in battle.

Saitama is undoubtedly one of the strongest anime main characters, who is incredibly fast, strong, and highly durable. His power cannot be put on a power scale ranking and is something that stands miles atop the strongest S-class hero Blast in the series.

There are moments in the series where we do wonder if Saitama is a human being, with all of the feats he achieved, and the same thought also strikes other villains and heroes alike, and wonder if Saitama can exist in this universe without any repercussions to his power.

No character in One Punch Man ever comes close to the power level of Saitama, not even the God-like entity in the series.

Ichigo vs. Saitama: Who Would Win & Comparison

This is a pretty easy battle to decide, as Saitama just needs to become serious in a fight, and he will obliterate anything or anyone in his way. Ichigo being strong does not mean anything to Saitama as the latter is too powerful to be even represented on a power scale ranking scale.

Saitama is the strongest and the most broken main character for a reason, and all of his character moments in the series justify that.

Saitama wins this round easily, with his exceptional display of raw strength, which is capable of destroying entire galaxies with just one punch.

Even the impact created by his punch was so powerful that it split clouds for hundreds and thousands of miles in his fight with Boros, and Boros added that Saitama was still holding back and not letting on his real strength.

Ichigo is powerful, with a lot of raw strength, but he does not hold a candle to the caped baldy hero.

Saitama wins this round again while traveling from Moon to Earth in just a few seconds and showing off his supreme speed, which creates afterimages of him in many battles. He was even faster than Cosmic Fear mode Garou, who had the power to warp through dimensions.

Saitama searched the whole of Jupiter’s moon to check where Garou teleported to. Ichigo loses this round by a large fraction, as he still needs to beat the supreme Shunpo master, Aizen, in terms of speed if he needs to at least have a decent chance with Saitama.

This is where Ichigo shines, as Saitama has very few abilities. He needs to defeat his enemy, whereas Ichigo uses a barrage of attacks to defeat his opponents.

Ichigo has a bigger number of attacks and powers, which he can put to use in a battle, compared to Saitama, who always relies on his fists for attacking. Ichigo wins this round with the variety of attacks he puts up to use and the quirky counters he comes up with during battles.

Even if Ichigo can hold off a decent amount of damage when deploying off his Blut Vene, Saitama was unscathed even after he faced his Serious punch headfirst.

Saitama gets this round in his bag with ease, as he never even got injured in the whole series, not to anyone or anything. Even the atmospheric pressure and various factors in outer space could not harm him.

After comparatively looking at both the character’s powers and abilities in detail, we can conclude that Ichigo is not stronger than Saitama in any aspect, as Saitama just needs to turn on his Serious mode, and no one can stand in his way. No character has achieved what he did in the series, and even coming close to what Saitama did, needs a great deal of broken power and abilities to perform.