Skip to contentHome » Anime & Manga » Law vs Kid: Is Law Stronger than Kid (One Piece) 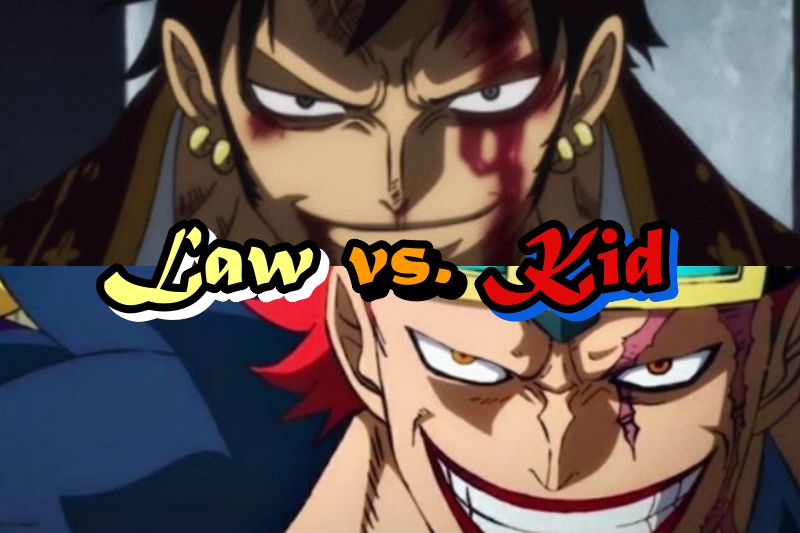 Trafalgar Law and Eustass Kid are two prominent members of the Worst Generation who form an alliance with Monkey D. Luffy in Wano to defeat the combined force of two Yonko, Kaido, and Big Mom. While Luffy fights Kaido and defeats him, Law and Kid stand up against Big Mom, ultimately defeating her in a fierce battle. Now, in the case of Law vs. Kid, who’s the stronger one?

Law and Kid are always portrayed as equally strong and in the same league as Luffy in One Piece. But after the events of Wano, it is pretty clear that Luffy has surpassed his two contemporaries in terms of power and is undoubtedly one of the strongest of the Worst Generation at the moment, with Law and Kid following him close behind. But that begs the question: who is stronger between Law and Kid?

Though their fighting styles differ, Law and Kid are both very powerful in their own rights. Law’s powers are more technical and versatile, while Kid excels in brawling and brute strength. Their Devil Fruits are also some of the most potent and useful Devil Fruits shown in the series. Even in their fight against Big Mom, they contribute equally and complement each other well. Every tiny hint makes it clear that Law and Kid are similarly strong.

But due to Law’s unique powers that come with his Devil Fruit and his high intellect, a lot of fans believe that Law is stronger than Kid, even if only by a little bit. So, to resolve the conflict of Law vs. Kid, we looked into the powers and abilities of the said pirates and compared them to make a sound judgment. Let’s see which one of them is the stronger one.

Trafalgar D. Water Law is the captain of Heart Pirates. He’s a surgeon and a swordsman, as well as a member of the mysterious D Clan. Law first makes his introduction in the Sabaody Archipelago Arc, where his bounty is revealed to be 200,000,000 bellies, which makes him one of the Supernovas.

Law later fights against marine soldiers side by side with Kid and Luffy. He is also the man who heals Luffy after the latter is tremendously injured after the Marineford War.

Law’s appearance after the time skip is in the Punk Hazard Arc, where he is revealed to be one of the Shichibukai. He later makes an alliance with the Straw Hat Pirates and Kin’emon to fight against Kaido. After their victory against Doflamingo and alliance with the Mink Tribe, Law goes to Wano with his crew and a part of the alliance to continue with their plan.

Law’s Devil Fruit is one of the most unique and versatile Fruits shown in the series. He ate the Ope Ope no Mi, a Paramecia-type Devil Fruit.

During his fight with Big Mom alongside Kid, Law’s Devil Fruit experiences an awakening.

As of yet, Law is shown to be using only two kinds of Haki: Busoshoku Haki and Kenbunshoku Haki. It isn’t clear yet if he doesn’t have Haoshoku Haki or if he has it but hasn’t used it in the series yet.

But given Law’s role as an equal and rival of Luffy, as well as being a member of the D Clan, there’s a big probability that he’ll be using it later in the story.

Law wields the sword Nodachi Kikoku which is almost as tall as he is. He’s a proficient swordsman and can hold his own against strong opponents like Smoker and Tashigi with his just swordsman skills.

Who is Eustass Kid? Powers and Abilities

Eustass Kid is the captain of the Kid Pirates and an infamous pirate who rose to prominence for his brutality. He, along with his vice-captain and childhood friend, Killer, are two members of the Supernova.

He is introduced in the story in the Sabaody Archipelago Arc along with the rest of the Worst Generation. At that time, Kid is the only one in the group with a bounty higher than Luffy.

After the time skip, it is revealed that Kid targeted and attacked Shanks and the Red Hair Pirates at some point and lost one of his arms as a result. He meets Luffy again at Udon, where he is jailed after being defeated by Kaido.

Later, Kid forms an alliance with Luffy and Law to fight against the combined force of Kaido and Big Mom. He ultimately defeats Big Mom alongside Law.

Kid is a Paramecia-type Devil Fruit user who ate the Jiki Jiki no Mi, which gave him the ability to create a magnetic field and manipulate metals within his range.

Kid, like Law, awakened his Devil Fruit during his fight against Big Mom, which ultimately leads to their victory. Jiki Jiko no Mi’s awakening allows Kid to attach his own magnetic powers to specific objects, giving them the same magnetism.

Though he has confessed to not having mastered the ability yet and it takes a lot of stamina for him to use, it’s still a formidable weapon for the redhead pirate.

Both Law and Kid have their own styles of fighting. The Heart Pirates’ captain is tactical, and the magnet man is fierce in battle. But their powers, in the end, are evenly matched. Let’s get into details and see how these two captains of the Worst Generation compare against each other.

In terms of strength, Kid will be the undeniable winner because of his bigger bulk as well as his brute strength. Law is also a pretty strong guy, but when it comes to raw strength, Kid takes the cake over him.

Both of them are pretty durable in battle. During their raid on Onigashima, Kid and Law get into such intense fights that they would leave any normal person invalid for the time being.

But the pair kept up with their attacks. In a fight against each other, it’ll be very difficult to say who’d win since they match up in this aspect pretty well.

Law is much quicker and more agile than Kid. He’s also faster at attacking and reacting. With Kid’s magnetic powers, he attracts metal, and that, in turn, affects his speed. So, in this Law vs. Kid scenario, Law definitely has the upper hand.

Based on Devil Fruit Abilities

In a fight between Law and Kid, Law just might excel against Kid based on just Devil Fruit powers. Kid’s powers are directly connected with metals, and if Law abandons his sword and any metal on him, defeating Kid with his Ope Ope no Mi powers will be rather easy.

4) Based on Devil Fruit Awakening

The Devil Fruit powers were one thing, but their awakening can change things significantly. Law’s Devil Fruit awakening gives a wide range of powers, sure, but Kid’s ability to attach magnetism to anything and use them as he likes is no small mountain to cover.

Law’s powers can now directly be attached to his weapons which Kid can easily manipulate. So, Kid has a better chance of winning with his Devil Fruit awakening.

Law and Kid both have pretty high endurance. They suffered serious injuries again and again during their raid to Onigashima. Even before that, they kept going in spite of it.

But this round also goes to Kid because he has suffered through brutal torture during his imprisonment in Udon but still retained his defiance and strong will.

6) Based on Tactical Sense

In terms of a tactical sense, it’s no surprise who’s going to win. Law is one of the smartest characters in the series and a highly calculating person, as shown multiple times. In terms of tactics, Kid won’t stand a chance against him. This time, Law wins this Law vs. Kid round.

After diving deep into the abilities and powers of both Law and Kid, we’ve found that despite their expertise in different areas, overall, the pair is pretty well matched. If a fight between them breaks out, there’d be no guarantee as to who’s going to win. So, it’ll be safe to say that Law is actually not stronger than Kid. Here’s our verdict of Law vs. Kid.