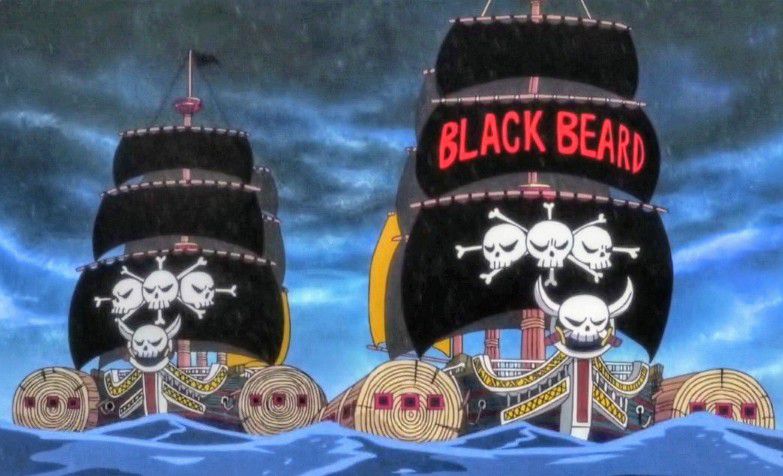 Marshall.D.Teach, aka Blackbeard, is the main antagonist of the One Piece series. He is also one of the mysterious characters. No one knows the secret behind his consumption of two devil fruits and can effectively use them simultaneously. With this power, he is considered to be the most robust character of the series.

Now, the Blackbeard Pirates has grown into a powerful crew. There are many theories made on Blackbeard and his pirate group. In the series, it has shown that every pirate flag has some meaning. But what about Blackbeard’s pirate flag? What is the purpose of three skulls in his pirate flag?

Oda sensei has consistently demonstrated everything with some meaning. So, we may consider that the Blackbeard Pirate’s flag has some significance too. Therefore, in this post, we will discuss the purpose of the three skulls and how it is linked to the mystery of two devil fruits.

Must Read- Top 7 Characters who can overpower Gol D. Roger in One Piece

One Piece manga series has shown the appearance and story of Blackbeard at every interval. The beginning of all this was started in Mocktown, where Luffy encountered him for the first time.

If we carefully observe, we can witness at that time Blackbeard’s three teeth were missing. But, in the Impel Down, the chapter showed four lost teeth of his, and the very next moment, he had all his teeth.

The difference in teeth loss wasn’t a mistake. During the Marineford Battle, the series has shown Blackbeard’s four, three, and zero teeth missing one after the other. This incident displayed three perspectives of him. Not only this incident, if we notice then we can witness that every time the One Piece series has shown this point.

There is a possibility that it may connect with his pirate flag. Blackbeard also always carries three guns with him. It might be coincident, but we can’t neglect this also.

If we join all these puzzles, we can perceive the concept of three. 3 skulls, 3 guns, 3 teeth (in the beginning), 3 blades that injured Shanks, and maybe 3 devil fruits. Fans have made the predictions that he got his first devil fruit in his adolescence.

In our opinion, he might eat Clone-Clone fruit. This devil fruit may grant him the power to generate clones of his body. These clones can be split and joined to the main body. That is why he could use the power of two or maybe three devil fruit at the same time. Possibly, these three skulls in his pirate flag represent the three real clones of Blackbeard.

Also, when there was a fight between the Roger pirates and the Whitebeard pirates, Buggy told Shanks that Teach had never slept in his entire life. We have also got confirmation of this from Marco. Blackbeard’s body has some deformities; therefore, he never sleeps.

But our point of view is different. This may be the ability of his Clone-Clone fruit. One clone sleep at one time, and the other one is awake. As the series goes on, his story is getting more and more enjoyable.

Theory on Yami-Yami No Mi-

Some fans have also predicted that Blackbeard’s Yami-Yami No Mi can absorb anything. Here the word anything refers to the power of another devil fruit. Maybe he absorbed Whitebeard’s devil fruit’s power with his Dark-Dark fruit.

We don’t know Darkness fruit’s full ability, but we know that Blackbeard was searching for it for a long time. He also studied very well about this fruit.

Perhaps, Dark-Dark fruit grants him the power to absorb and reuse any other devil fruit’s abilities. Moreover, the three skulls on his flag may denote that he will get the power of the three most vigorous devil fruit.

Also, another theory that surfaced recently is about the Will of D. According to the One Piece manga, only Doflamingo, the World Government, Dragon, and the Roger Pirates know the truth behind the Will of D.

According to Doflamingo, this truth can flip the world upside down. Therefore, in my opinion, Will of D is the truth that D. can eat more than one devil fruit. That’s why D. is called the devils, and these fruits belong to them thats’ why they are called Devil Fruits. Maybe Blackbeard knows this truth; that’s why he can easily use the power of two devil fruits.

Anything can be possible. This is my opinion on the theories of Blackbeard. I hope you enjoy it. Now it’s all up to Oda sensei what he thought about the character development of Blackbeard.

Truth of Florian Triangle in One Piece

One Piece: Does Luffy beat Big Mom? Power Comparison Based on Manga