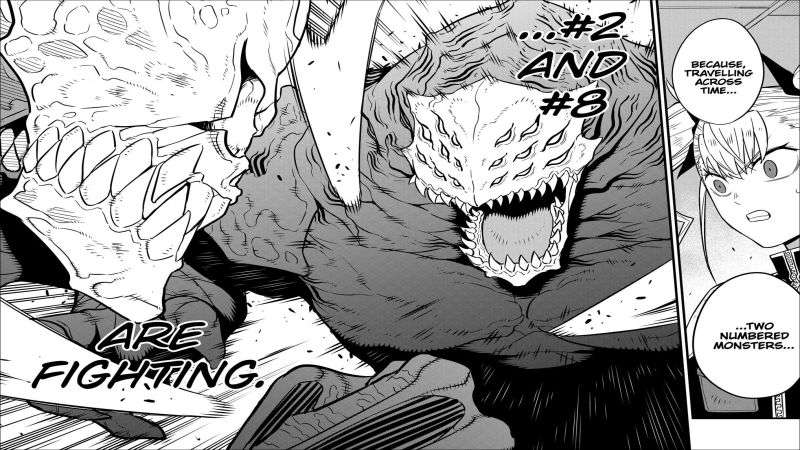 Kaiju No. 8 has been slowly rising to the fold in the manga world. It is only a matter of time before it gets an announcement of its animated series. Recently, it was also reported that Kaiju No. 8 has sold record copies of its manga.

In today’s article, we will be taking a look at Isao Shinomiya or Monster #2 and dissect his powers. Kaiju No. 8 has some amazing characters going toe to toe with monsters. As the title suggests, the story is about Monster #8, who is also part human.

There is also an organization called the Defense Force, which protects the city from these deadly monsters. The head of this organization is Isao Shinomiya, who is also their strongest member and a veteran in this field.

The most interesting point to notice is that, unlike Kafka Hibino, Isao Shinomiya cannot turn into a monster at will. He is technically not a humanoid monster. Isao Shinomiya uses a mechanical suit and arms made from the core of Kaiju No. 2.

As the name suggests, Monster #2 was the second monster to receive numerical recognition. It was huge in size and caused massive destruction in Sapporo City in the year 1972. Its destructive power was insane, which means no ordinary person in the Defense Force can wield its power.

This further establishes the capabilities of Isao Shinomiya as the Chief of this powerful organization.

It is not easy to achieve the title of the strongest person in the history of the Defense Force. It is also not easy to live up to that name’s reputation till the end of one’s career. However, Isao Shinomiya has done exactly that. His old age hasn’t managed to make any cut on his sharpness and power as a fighter.

Being the only man alive to fully utilize the power of a monster who is at a daikaiju level is an astonishing feat.

Isao Shinomiya likes to take the fight close to the enemy and strike them with a powerful blow dealing the maximum impact. His skills in hand-to-hand combat are superior to everyone as he saw how he was able to overwhelm Kafka even in his Kaiju form. His mere punches were enough to push Hibino to his back foot.

Isao Shinomiya is able to completely draw the power of Monster #2 and utilize its immense physical capabilities. We saw how the extra layers of the durable training shelter of the Defense Force were destroyed when Kafka and Shinomiya’s power-packed punches collided with each other.

Isao Shinomiya is not a one-trick pony. Although he has enough destructive power to decimate anyone, it would be disadvantageous to him if he solely relied on that. As a result, he also makes use of his super-fast speed and reflexes.

This works well in combination with his immense strength as it allows him to quickly get up close and personal to the enemy without giving them a chance to react. Similarly, it also allows him to dodge his opponents’ attacks easily without taking many hits.

We know that the body of Monster #2 has a thick skin that is durable enough to withstand the strongest of attacks. Thus, the suit made from Kaiju No. 2 is also strong as well which was proved by how well Isao Shinomiya could shield himself from Kafka’s attacks.

This adds to the overall stats of the Chief, allowing him to absorb attacks from the enemies and retaliate with a counterattack.

Isao Shinomiya is a beast with his two gauntlets that have been made by the core of Kaiju No. 2. He can use those gauntlets to generate powerful lightning attacks and blast them directly on the enemies. This is a highly improvised device made by Izumo Tech.

A specialty of Monster #2 was to attack its enemies with powerful sonic booms. The same technique was used by Isao Shinomiya that allowed him to throw powerful sonic blasts at Kaiju No. 8 while simultaneously expanding the area of his attacks.

Another variation of this technique used by Isao Shinomiya was the Twin Blast. It involved bamboozling the enemy with two back-to-back strikes of the Force Blast.

At this point in the story, we have only seen one singular instance of Isao Shinomiya’s (Monster #2) power. Although we know that he has numerous exploits throughout his career, they have not been explained in the plot. However, only a single fight against Kafka Hibino was enough to give us a taste of his power.

He did not shudder at a Mega Monster’s presence and initially started the fight without any type of equipment. This proves that he has confidence in his abilities and is not dependent on artificial gears.

He used his experience brilliantly to completely neutralize Kaiju No. 8 before it went berserk. The manga of Kaiju No. 8 can be read from the official sites of Mangaplus Shueisha.