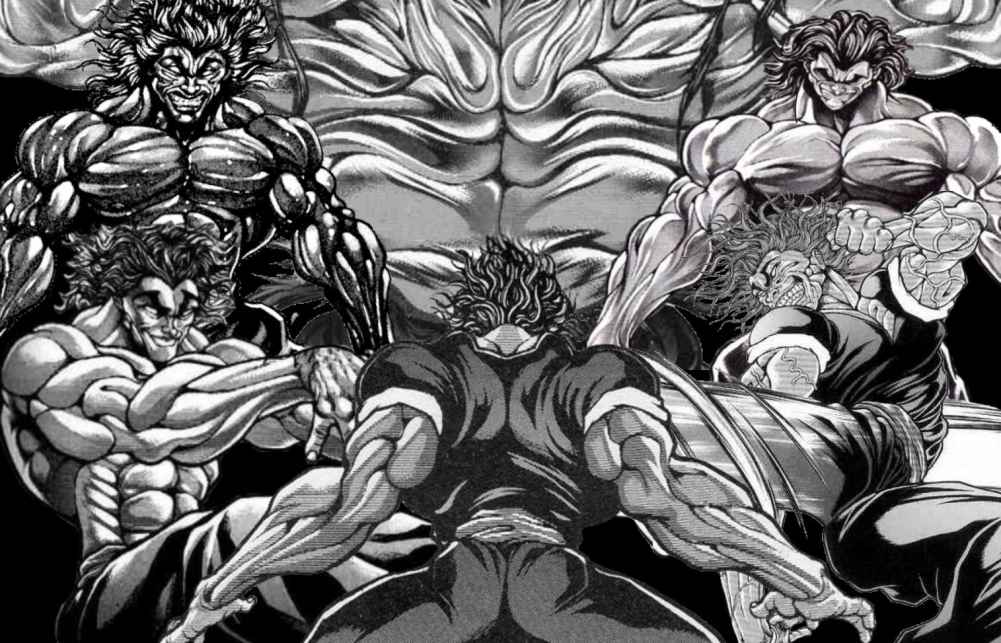 With the release of Baki – Son of Ogre just around the corner, we bring you the Top 15 Strongest Characters in Baki Manga Ranked.

The series has gained a considerable fanbase with the antics of the ever-evolving Baki Hanma. And since his strength grows with every opponent he faces, the series indeed aims and succeeds at creating hype.

As we move on to Season 4, fans sure wonder whether their favorites are some of the strongest. And so, without any further ado, let’s get into the Top 15 Strongest Characters in Baki Manga Ranked.

Jun Guevara is a former pirate of the high seas and one of the free men in Arizona prison. He is a man of discipline and is trained in a fighting style Mu-kakure-ryuu Ninjutsu.

Considering this character is based on Che Guevara, he retains the same radical views and sense of pride. In the series, he is known to overpower even heavily armed opponents.

Further, he is known for ripping out of person’s cochlea using a Sumo Harite and his own hair.

Doppo is the head of the Shinshinkai karate school with over 50 years of martial arts experience. He is the former champion of the underground tournament held by Mitsunari Tokugawa.

Since he uses Shinshinkai karate and Orochi-ryuu karate, he has over 20 fighting techniques. Thus he is a master of combat who is able to prepare tricks in advance and discern secrets behind special moves.

However, despite being able to stand toe-to-toe with Yujiro, his only downfall is that he sees Karate as the purest form of fighting. Thus he expects his opponents to have the same view which leaves him vulnerable to underhand attacks.

In the series, Gouki Shibukawa is known as ‘The Master.’ He is trained in jujutsu and judo and is known for fighting many wars for his country.

His fighting style focuses more on technique rather than raw power, which is why he doesn’t bulk up. This is made clear by the fact that he was able to injure opponents twice his size like Doppo Orochi and Jack Hanma.

However, he does have a superiority complex when it comes to youngsters, which often makes him underestimate them.

Kaoru is the strongest yakuza in Japan and the second-generation boss of the Hanayama group, who specializes in street fighting. In the series, this powerful character is seen as an older brother to Baki Hanma.

One of his most terrifyingly powerful aspects is his tight grip which is capable of causing an arm to explode. This is done by constricting blood vessels until the pressure causes an explosion.

In the series has fought bravely and rashly and even dealt with swords and other weapons with his bare hands. However, his large frame reduces his speed which makes him slow to react to attacks as compared to other fighters.

In the series, he has gone up against fighters like Kaiou Retsu, Dorian, and Kaoru Hanayama. Thus he has gained much experience and grown stronger than ever with every loss.

However, this youngster still has potential yet to be realized, which lands him at Number 11 on the list of Baki strongest characters.

Retsu specializes in Chinese Kenpo but also practices many other fighting styles. In the series, Retsu is known for his immense knowledge in combat.

This comes from his skill in a variety of fighting styles and use of weapons. Thus it allows him to understand and deconstruct other techniques with ease which helps him deal with opponents efficiently.

Further, he also ensures that his victory is secured no matter what, which makes him one of Baki the grappler strongest characters.

Jack Hanma is the son of Yujiro Hanma and a Canadian pit fighter. In his fights, he is famously known as Jack Hammer due to his strength.

His knowledge and skill in his fighting style are limited as he often fights with revenge and rage in mind. However, he overcomes this by doping and increasing his physical capabilities.

Despite his doping, he chooses to fight with a rabid animalistic approach. His signature move happens to be biting his opponents, which works well enough for him.

Motobe is a Japanese jujutsu master skilled in Motobe-ryuu Jujutsu Kenjutsu. Since he is not very skilled physically, he is extremely reliant on weapons, especially the traditional Japanese type.

Further, his intellect and experience as a fighter are immense. This helps him strategize during before and after fights.

Through this, he is able to modify fighting techniques and recreate them to be more effective.

Oliva is a character soon to appear in Baki season 4. He is a US assassin and a jailer in the Arizona prison.

Being the strongest man in the US, he has dense muscles and a tremendous amount of raw strength.

Given his dense muscles, he tends to rely on raw brute strength and is known for his inhuman recovery speed. Thus he is one of the Baki strongest creatures.

Nomi no Sukune II is a pro-Sumo wrestler skilled in Ancient Sumo. His most striking aspect is his grip which is capable of converting coal into a diamond.

He is well known for his toughness and endurance against powerful opponents. In the series, he also manages to completely crush Oliva’s dense muscles and defeat him.

Further, he is one of the few that was able to take on Yujiro and survive his hit to the face.

He is the most renowned Supreme Grandmaster of Chinese Kenpo. He is known to be the strongest of all Kaiou except for Yujiro.

Kaku is around 146 years old and has over a century of fighting experience. Although the full extent of his power is not stated, he is known for his technique called Shaorii.

Shaorii allows him to absorb his opponents’ bodyweight and use it against them in the form of a punch.

Pickle is a man of the Jurassic Era who was found preserved in a saline rock formation. He is said to have fought and eaten T-Rexes with his bare hands in his time.

Due to his origin and timeline, his combat approach is wild, animalistic, and without ethical backing. Pickle’s body has been sculpted through years in the wild, where he utilized and strengthened every part through daily tasks.

Due to this, he has one of the most durable bodies and raw strength. His only weakness is his inability to learn and sharpen his existing skills, which puts him at a disadvantage when it comes to modern techniques.

Musashi is a legendary Samurai known to be the strongest Samurai in the world who was cloned from spine tissue. He is the creator of Ninten Ichi-ryuu and is known for his one-man army action.

Not only does he has impressive endurance and speed, but he also has commendable grip and wisdom. His experience, intelligence, and skill exceed most others.

Thus he is able to injure opponents like Pickle and Yujiro, which makes him one of the strongest creatures in Baki.

Baki Hanma is the main character of the series and naturally has a huge talent and potential. Throughout the series, he has only continued to grow in strength and experience.

Baki not only excels in speed, endurance and strength but is also able to think and produce results on the spot. He has defeated multiple opponents like Pickle and Oliva.

Further, his vast skill set in mixed martial arts makes him one of the strongest characters in the series. However, still remains inferior to Yujiro, but this may be due to the obvious difference in experience and age.

Yujiro is the character dubbed to be Baki’s strongest creature on earth. He is powerful enough to affect the tectonic activity and break sound barriers.

Having mastered all forms of combat, he can snap katanas and other weapons merely by gripping them. Further, his speed is faster than what is perceivable by the eye, which grants him a great advantage over his opponent.

Even his knowledge of combat and skill remains unrivaled, thus making him the strongest character in the Baki series.

Q1. Is Baki stronger than Yujiro?

Ans- No, Yujiro is the strongest in the series currently.

Q2. Can anyone defeat Yujiro?

Ans- According to most sources, the only person Yujiro cannot defeat is his father, Yuichiro. However, this is only an assumption.

Q3. Who is the strongest creature in Baki?

Ans- Yujiro Hanma is the strongest creature in the Baki series.

Ans- No, both the anime and manga of the Baki series are incomplete.

Q6. Where to Watch Hanma Baki – Son of Ogre?

Ans- You can find information on this in our article here.

With this, we conclude with our article on the Top 15 Strongest Characters in Baki as per Manga Ranked. We hope you’ve found some of your favorites here so be sure to stay tuned for more.