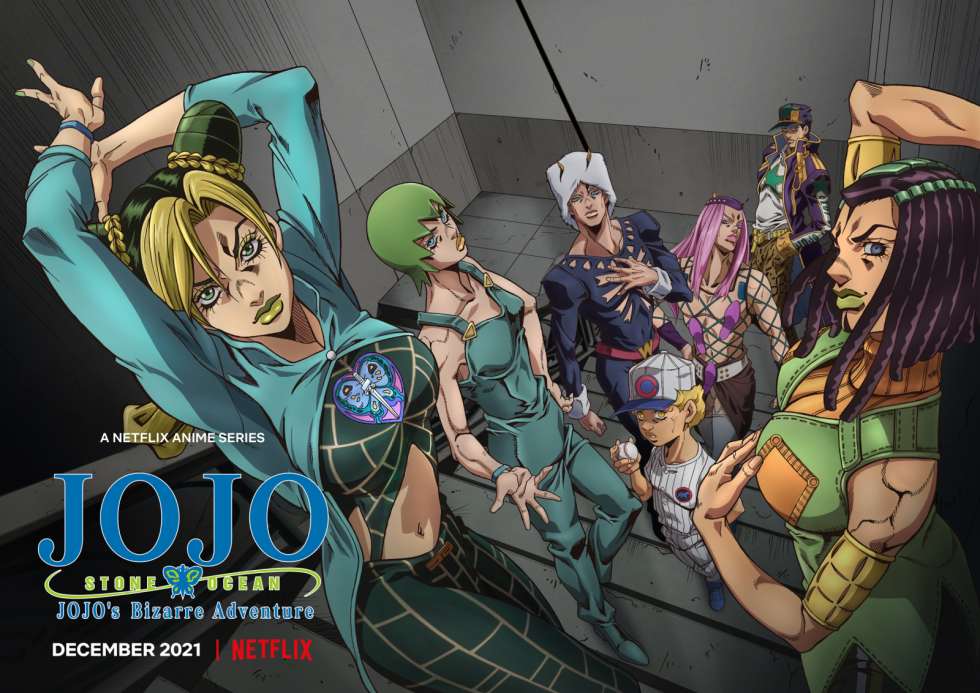 Today we bring to you an article on How to Watch JoJo’s Bizarre Adventure: Part 6 “Stone Ocean” for Free?

The JoJo series has been around for quite some time now; fans are hyped with the announcement of Part 6. Especially with the first female main character in the JoJo’s Bizzare Adventure franchise, the hype is high.

The series began its anime journey in 2012 and has since carried on to be one of the most referenced series. Its previous season, Season 5, was released in 2016, and so fans sure are hungry for more.

What makes JoJo’s Bizarre Adventure: Part 6 “Stone Ocean” most anticipated is its female representation. So stay tuned for the end of the article to hear more about the plot of Part 6 of the series.

And so, without any further ado, let’s get into How to Watch JoJo’s Bizarre Adventure: Part 6 “Stone Ocean” for Free?

Must Read- How to Watch Jujutsu Kaisen 0: The Movie for Free?

JoJo’s Bizarre Adventure: Part 6 “Stone Ocean” will be officially released on Netflix in December 2021. This release is a predelivery of the series exclusively on Netflix, which means it will have a different release as compared to other anime.

Season 5 of the series known as Jolyne Cujoh: Stone Ocean will premiere on Netflix in December 2021. However, it will be released on other platforms as televised series in January 2022.

Since the only thing confirmed so far is that the series will have a monthly release pattern, an official date for the same hasn’t been announced. Thus below, we’ve noted for you a few other anime outlets to watch the series in case you don’t have a Netflix account.

As mentioned earlier, all other platforms will release JoJo’s Bizarre Adventure Season 5 in January 2022. And so fans can expect to see it on Crunchyroll soon after it announces its release.

On Crunchyroll, fans can access anime for free soon after signing up. However, since the free version includes ads, fans can also use the paid premium feature. This feature removes ads and provides simulcasts.

Hulu, too has recently been expanding its anime library and is slowly becoming as well-established as Netflix. Thus fans can also expect Part 6 of the JoJo’s series to be released here in January 2022.

However, Hulu, like Netflix, is a paid series that only offers a one-month free trial.

Anime streaming outlets aren’t very accessible to the local masses thus make it difficult for people to view anime legally. Thus the rise in anime pirating sites is understandable to some extent as they make anime more accessible.

However, these sites also take away the primary source of income of hardworking creators. Thus, we do not support anime piracy in any shape or form.

However, it would also be unfair to say that fans without access to funds or legal outlets be excluded. Thus the private sites we have noted below are temporary outlets for fans that do not have access to legal ones.

Netflix has now become a major platform for various sorts of shows available in different languages. And over the years, it has also expanded its anime library, thus granting fans access to numerous anime.

The great part about it is that it’s legal and can even access shows of other regions with a suitable VPN. So in case you need help setting up an account, we’ve got you covered with the steps for it.

However, kindly note that the free one-month trial only applies to new registrations.

As we have mentioned before, here we have noted before, we do not support anime piracy in any form. Thus we encourage fans using them to switch to legal outlets like Crunchyroll which can be accessed for free.

Anyways, here we’ve mentioned a few private websites that can be accessed through a simple google or browser search.

Recently telegram too has become an outlet for sharing and downloading anime. Thus below we’ve mentioned the joining links of a few telegram channels that are run by fans from the anime community.

Kindly note that the channels mentioned above share numerous anime series. Thus they may not always follow the official release date.

Fans can also find anime on Torrent that will be available and ready for download. The episodes of JoJo’s Bizzare Adventure Season 5 should be available soon after its Netflix release.

These can be accessed using a search engine and a VPN. In fact, if you search for ‘JoJo’s Bizzare Adventure: Part 6 Torrent’, you should be able to access it.

In case you were looking out for a few apps to watch anime on, we have listed a few below.

Most of these apps can be downloaded directly from the Google Play Store.

Kindly note that some apps like VRV may not be available in regions like India and thus may require a suitable VPN. Further, apps like Shiro.is can only be accessed through their respective private websites online.

The easiest way to find these apps would be through a google search or a browser search.

As mentioned above, there has been no official date set for the release of Part 6. So far, we are only informed that the series will premiere on Netflix in December 2021.

The events of the series take place 10 years after the events of Season 4 or Part 5. And is set in 2011 Florida, with all characters as glorious as they should be.

Here the main character Jolyne Cujoh is sentenced to 15 years in prison as she is framed for murder. She is imprisoned in an island prison in Florida that is nicknamed the Aquarium.

However, while she was in prison, she was visited by her father, Jotaro Kujo. Here, he informs Jolyne that Dio Brando’s followers are out to kill her, and so she must remain wary even while in jail.

Before he leaves, he gives her a gift that unleashes her supernatural powers. But as she works towards her escape and notices things about the prison, her father is attacked.

Since the attack was planned by Dio Brando’s followers, the effects are surely severe. This results in Jotaro being stripped of his memories and his stand.

And so, Jolyne must set out to save her father with her new stand and power while attempting to put an end to Dio’s evil for once and for all.

But with her being stuck in prison, a number of obstacles are sure to arise. And so Season 5 shall come bearing a refreshing set of characters that may or may not aid her near impossible prison break.

With this, we end with How to Watch JoJo’s Bizarre Adventure: Part 6 “Stone Ocean” for Free? And next, we have a little FAQ section to answer some of the most asked questions.

Ans – Season 5 of the JoJo series can be watched on Netflix.

Q2. Does Crunchyroll have JoJo Part 6?

Ans – Crunchyroll is expected to have JoJo Part 6 released in January 2022.

Q3. Does Netflix have all JoJo episodes?

Ans – The availability of JoJo episodes depends on regional circumstances.

Ans – Yes, both the manga and the anime series are currently ongoing.

Q5. Where can I watch all JoJo seasons?

Ans – Right now, VRV has managed to culminate all seasons of the JoJo series. However, Netflix and Crunchyroll too have the series seasons.

Q6. How can I watch all JoJo episodes?

Ans – You can watch all JoJo episodes on VRV, Crunchyroll, and Netflix, or on private websites.

With this, we conclude with our article on How to Watch JoJo’s Bizarre Adventure: Part 6 “Stone Ocean” for Free? We hope we’ve been of some help and hope to see you say safe, tuned, and hyped for further updates.