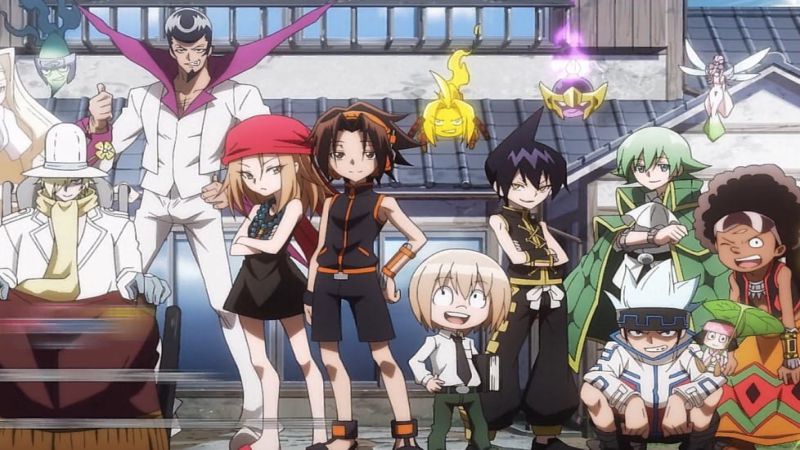 Shaman King is the talk of the town as the anime has been recently released in April 2021. As the title suggests, this anime is about Shamans who are looking to take the title of Shaman King for themselves.

So we will be taking a deep dive into the top 15 strongest characters in Shaman King. It will be exciting to watch whether our favorite characters make it on the top half of the list or not.

Chocolove is a member of Team Ren who tries very hard to be funny. He mainly relies on using spirits to win the fights against his opponents.

He has two guardian ghosts named Mic the Jaguar and Pascal Avaf, which gives him a huge boost in power. He also has the Spirit of Wind with him, allowing him to slice wind with its wings.

Luchist is a physically strong character as he saw how he wrecked a pair of bulletproof glasses by himself. His natural speed gives him the necessary mobility on a battlefield, making it easy to dodge his enemies’ attacks.

He has one of the first Archangels, Fallen Angel Lucifer, as his guardian ghost. Not only it can shatter other souls, but it can also change into its original car form from Over-Soul.

Kado belongs to the Kami Class and is a Gandhara member in Shaman King. His Aizen Myooh guardian ghost is one of the most frightening spirits in Shaman King. It is a huge Buddhistic spirit that can dominate enemies with its six arms.

It can also track down other spirits easily regardless of their speed. This makes him one of the strongest Shaman King characters, and just like other Gandhara members, he can also nullify Furyoku.

Komeri is another of the Gandhara members who has an Indian origin. She belongs to team Nyorai, and regardless of her timid appearance, she can wreak havoc among her enemies.

Her spirit is Batoh Nyorai which can strike fear in the opponent’s heart just with one look. It carries two weapons in each of its arms, and being a dual wielder provides a huge advantage to it on the battlefield.

Jackson is a fiery character in Shaman King who, just like the characters mentioned above, is also a member of Gandhara. His fiery personality sometimes comes in the way of his fights, as he is often known to lose his cool.

He has a similar Buddhistic spirit called Fudo Myooh, which is his guardian ghost. Over Soul also allows the spirit to use a sword in battles. The specialty of the spirit is that it can put anyone in a deep sleep with its personal weapon, making them unable to put up a fight.

Lyserg is a part of an extremist group in Shaman King whose only goal is to get revenge on Asakura Hao. Being a dowser, he has the ability to find a person, making them unable to launch a sneak attack on him. He doesn’t rely on his brute strength for fighting and is by far one of the cleverest warriors.

He has three spirits, namely Morphine, Zelel, and Spirit of Fire. This easily makes him one of the strongest Shaman King characters. The fact that he is considered the second strongest out of the five elemental warriors further speaks of his massive strength.

Faust is that character in the series who keeps true to his spooky appearance. His powers are also similar to that, and he can creep out anyone. He is a necromancer, and his main ability lies in reviving dead bodies.

At first, he was only able to revive the skeletons, but slowly he also gained the ability to bring back living beings from their deaths. His ability allows him to attack opponents with a huge number of skeletons leading them to use up their magic and giving him the advantage.

Horohoro belongs to the Ainu Tribe and is a part of The Ren team along with Tao Ren. He is a practical kid who can make the best use of his abilities to survive out in the wild.

This translates to his battle style, too, where he can manipulate use to make anything that will help him in both offense and defense. Apart from that, he has Kororo as his guardian ghost and the Spirit of Rain accompanying him in his fights.

Ren Tao is a serious kid in Shaman King who hails from the prestigious Tao family. His battle style is focused on his durability owing to having a tough body. His martial arts skills and sword fighting techniques are also unmatched in the series.

He has a unique ability to learn new techniques just by seeing them, which places him far above the rest. He is usually seen using the Basontou and Bao-Lei Sword in battles. He has Bason as his guardian ghost, and he is also one of the five elemental warriors with the Spirit of Thunder.

Anna is one of the most aggressive fighters in this series which truly makes her one of the strongest Shaman King characters. Her strength lies in the ability to channel spirits and summon them anywhere.

She can also read the minds of her enemies, giving her an edge in battles. Furyoku Nullification and Curse Reflection are two of her most powerful techniques. She also has two Shikigamis named Zenki and Goki as her spirits.

The Iron Maiden is, without a doubt, one of the strongest characters of Shaman King. Being the leader of the X-laws, she is truly terrifying and has a high Furyoku level.

As her name suggests, she relies on the absolute defense of her iron maiden in battles. That doesn’t mean she lacks offensive prowess since she can pack quite a punch. Shamash is her guardian ghost which also happens to be a God Class spirit.

The leader of the Gandhara group is a powerful and by far one of the strongest characters in the series. She has an extremely high level of Furyoku, and she can also revive anyone from the dead.

Similarly, she can send people to hell too. This just proves that our abilities are outright scary and can make anyone shiver. Dainichi Nyorai is her guardian ghost that excels in close combat.

Opacho follows Hao like no one else. She is an incredibly powerful character, and her traits may easily put her under the category of an overpowered character.

The fact that she can use clairvoyance and project illusions makes her a beast. Similar to Hao and Anna, she can also read minds. Her spirit is Mama, and using Over Soul, she can transform herself into a ferocious sheep.

The protagonist of this series is the second most powerful character of Shaman King. He can be seen slacking many times, but he is quite powerful and is one of the five elemental warriors.

He uses the earth element, which gives him an advantage against a lightning user. He has learned many powerful techniques throughout the course of this series, including Ultra Senji Ryakketsu. Amidamaru is one of the main spirits used by Yoh, who is samurai from 600 years ago.

Hao is, without a doubt, the strongest Shaman King character. He is one of the main antagonists in this series and is also the twin brother of Yoh. He has an incredible reserve of Furyoku owing to being an ancient shamanic master.

He can make even the strongest of Shamans tremble in front of him. Some of his most powerful abilities include Onmyodo, Reishi, Taizan Fukun no Sai, Curse Reflection, and Ring of Fire. He also controls the fire spirit and has Ohachiyo as his guardian ghost.

This brings us to the conclusion of the top 15 strongest characters in Shaman King 2021 Netflix. There are some incredibly overpowered characters in the series who have a stark difference from the rest of them.

The likes of Hao and Sati make the power level gap too visible. All in all, Shaman King is an action-filled anime with great characters that are bound to keep you hooked.

Ans- Yes, there is a possibility of Shaman King being back in Winter 2021.

Q2- How can I watch the new Shaman King?

Ans- You can watch the new Shaman King on Netflix.

Q4- Who is the strongest in Shaman King?

Ans– Hao Asakura is the strongest in Shaman King.

Q6- Who is the current Shaman King?