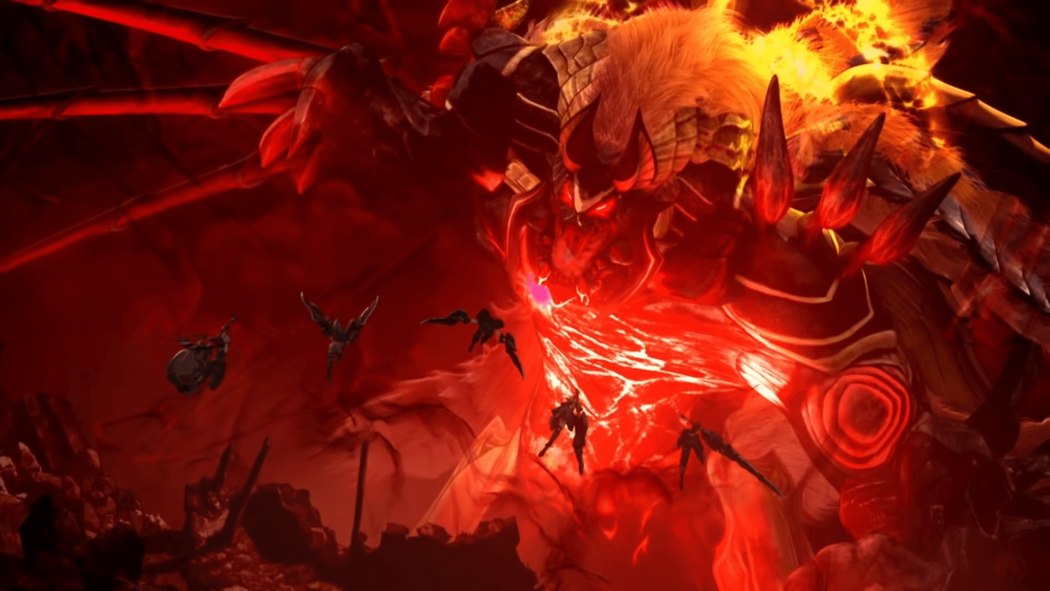 The God Eater series that began as a PSP game in 2010 has surely gained popularity due to its post-apocalyptic action. The series focuses on evolutionary freaks of nature that threaten human lives. And so we bring to you the Top 10 Strongest God Eater Aragami Ranked.

Aragami are the antagonists of the God Eater series who have come into existence due to Oracle Cells. These Oracle Cells boost the capabilities of a being by using a host. Thus when a whole colony of them feeds on a being, it converts them into an Aragami.

This colony of Oracle Cells forms a core that takes over a being’s body and commands it to act on impulse. Furthermore, it also grants these beings elemental powers to some extent.

In God Eater, all Aragami pose a high-level threat with not only their supernatural powers but also speed and strength. So now, without any further ado, let’s get into the Top 10 Strongest God Eater Aragami Ranked.

Given its aerial advantage, it has a tremendous observational vantage point and thus can give away its enemy’s location easily. Further, it also tends to be a menace during fights with other God Eater Aragami.

This Aragami is structurally based on a tiger-like animal and specializes in ice-based attacks. Due to its adaptability to ice, it is resistant to freeze and spark attacks. However, it does have many weak spots like head and tail and is also weak to blaze and divine attacks.

Another unique feature about the Prithvi Mata is that it restores HP soon after running away. Thus, even if it is nearly defeated, it’ll be of waste if it manages to run away as the whole battle will restart.

Sekhmet is a bird-like Aragami that possesses wide wings and resembles a Chi-You. In the series, this God Eater Aragami uses Blaze-based powers.

Its fire attacks can cause severe damage, incredibly when enraged. Furthermore, with its vast wings and aerial mobility, it is exceptionally skilled in close-range combat, which makes it difficult to kill without long-range weapons.

This large-sized God Eater Aragami is recognized for its unique appearance with a statue embedded in its head. Amaterasu uses Blaze-based attacks and is resistant to almost all other attacks except those Spark-based.

Although its weak point is its statue, it is protected by its quick-moving tentacles. However, these tentacles can only be damaged by Spark-based melee attacks. Furthermore, it is one of the most aggressive Aragami and thus requires high-speed attacks.

Must See – How to Read God Eater Manga in Order

Tsukuyomi is a large human-like Aragami that uses Divine elemental powers to attack with its powerful lasers. Given its rather flamboyant appearance, it showcases it well in its spinning dance attack. Further, it’s weak to Spark-based attacks but resistant to all others.

The best chance of landing a hit is soon after its spinning dance attack. Tsukuyomi’s other weak spots include its hair, moon halo, and arms.

Sariel is a butterfly-human-looking Aragami that uses Divine powers and emits rays of light from its forehead. Since it has wings, it is extremely mobile and also has a wide attack range.

Its weak points are its head and legs, but it is also weak to Blaze, Freeze, and Spark attacks. Further, due to its mobility, it is extremely speedy but does get a bit weak after its light pillar attack.

Quadriga is a tank Aragami heavily armed with armor and weapons and uses Blaze attacks. Considering that it is heavily armed, it is also very mobile with weapons and also has a variable attack range.

Further, its strongest attack is its rocket missile launch that can be extremely damaging. However, it is weak to Freeze and Divine based attacks and even has weak spots like its frontal armor.

Arda Nova is one of the most challenging Aragami to defeat as it serves as the last boss in God Eater: Resurrection. It is a large Aragami that takes damage to any elemental power-based attack.

However, this does not make it weak, as it can only be damaged when it gets enraged and attacks. Further, it also has a highly damaging stun attack and so may take some practice to defeat.

The Corrosive Hannibal is the hardest Aragami to defeat. This wingless dragon-looking Aragami moves much like a human and uses Divine attacks. However, it is only resistant to Blaze-based attacks.

It is said that Hannibals even use human-like attack patterns and thus make it seem almost sentient. However, its weak spots include its head and unbound wrist and are vulnerable after its Firestorm attack.

Here comes the Strongest God Eater Aragami, The Blitz Hannibal. Like most Hannibals, it uses human-like attacks but is two times faster than other Hannibal. Further, it moves and attacks much faster than usual when enraged, thus leaving you with minimum time to react.

Defeating this Aragami requires some practice and quick thinking that is able to end the fight soon after it begins.

With this, we conclude with our list of the Top 10 Strongest God Eater Aragami Ranked. And now before we end, we have a short FAQ section.

Q1. Who is the strongest Aragami in God Eater?

Ans – The strongest Aragami is between Corrosive Hannibal and Blitz Hannibal.

Q2. Who created the Aragami?

Q3. Can God Eaters have kids?

Ans – Yes, God Eaters can have kids. However, their kids develop unique abilities.

Q4. What does Aragami mean?

Ans – Aragami basically translates to a malevolent or raging god or deity.

Q5. Is God Eater coming back?

Ans – Although no official announcements have been made, fans are expecting to see God Eater Season 2 in 2022.

And so, we end our article on the Top 10 Strongest God Eater Aragami Ranked. Be sure to stay tuned and hyped for our upcoming articles.