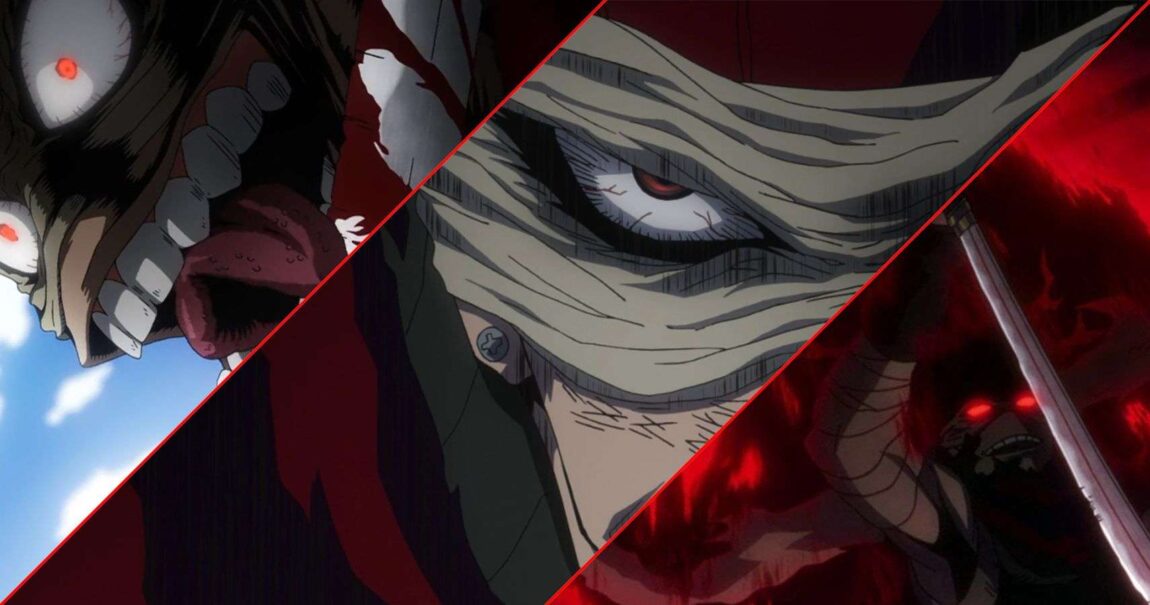 Today we have for you the Top 10 Strongest (MHA) My Hero Academia Villains in Prison Break Arc 2021.

The series has now approached its climax and is soon to grant us lots of action. With the recent Prison Break Arc, we also have multiple dangerous villains return to the frontlines.

All characters have begun their preparations, and the scene is almost set for the main action. So below, we’ve listed for you the Top 10 Strongest (MHA) My Hero Academia Villains in Prison Break Arc 2021.

Moonfish first appeared in the Forest Training Camp Arc. His quirk is Blade Tooth which allows him to lengthen his teeth into multiple powerful blades.

In the past, he fought against Bakugo and Shoto while restricting their movements with his blades. This was possible due to his great skill and experience in battle fuelled by his sadistic flesh-eating tendencies.

After escaping Tartarus in the Prison Break Arc, the first thing he did was kill multiple prison guards.

After escaping from Tartarus, the Dictator went after Deku using humans as a shield. His quirk is Despot, which is a puppeteer quirk.

This quirk lets him control people through threads that emerge from his body. In the Tartarus Escapees Arc, he was able to use humans as shields to attack Deku.

This made it difficult for the already exhausted Deku to make space for attacks without causing human casualties.

Stain first appeared in the Hero Killer Arc as Hero Killer: Stain. His quirk is Bloodcurdle which lets him paralyze targets for a maximum of 8 minutes depending on their blood type.

This is done as he tastes a sample of the target’s blood. Despite his complicated worldview, he is an incredibly strong villain with exceptional tactical intelligence.

This is showcased when he compensates for his quirk activation time with a sharpened battle sense and power. He has also single-handedly killed a winged Nomu to save Deku in the past. This makes him one of the most powerful villains in My Hero Academia.

Muscular is another villain who appeared in the Forest Training Camp Arc who later escaped from Tartarus. His quirk is Muscle Augmentation which allows amplification of muscle fibers.

He was one of the most formidable My Hero Academia villains faced by Deku with his incomplete quirk. As he escaped from Tartarus went on a rampage of destruction.

His destruction led to the large-scale destruction of property and even hurt hero-in-training Grand. This was until he was defeated and captured by Deku.

Nomu have served as vital minor antagonists throughout the series. They are one of the most common MHA villains and are created by Dr. Gariki.

They are categorized as lower-tier, middle-tier, upper-tier, near high-end, and high-end Nomu depending on their physical enhancements. However, even the weakest Nomu have managed to overpower even the most minor Pro Heroes.

Therefore many of them were imprisoned in Tartarus. This means that after the Prison Break Arc, many of them have escaped and are awaiting orders to cause destruction.

Kurogiri is a Nomu created by Dr. Garaki from the corpse of former UA student Obara Shirakumo. His appearance consists of a black fog that covers most of his body which helps with his quirk Warp Gate.

His quirk makes him practically untouchable by opponents heading his way and also makes for a great escape route. Since his quirk uses dimensions of space, he is almost an untouchable villain character in My Hero Academia.

Although imprisoned in Tartarus after the Prison Break Arc, his current location and status have not been revealed.

After she escaped from Tartarus with Chisaki, Lady Nagant was noted to possess a total of three quirks. This is the result of All For One acknowledging her skill and then using her as his pawn.

The former Pro Hero targets Deku with her quirk, Rifle, which transforms her right elbow into a rifle. And with her immense experience and skill, she surely gives Deku a hard time.

Furthermore, her sniping range of 30 km and impressive eyesight are further heightened by her Air Walk quirk. Finally, the self-destruct quirk ensures the completion of the task and its ultimate success.

Overhaul is a yakuza who appeared in the Shie Hassaikai Arc as the quirk-deleting drug dealer who abused Eri’s quirk. His quirk is Overhaul which grants complete control over matter as a can disassemble and reassemble anything.

Thus he was no doubt one of the strongest minor antagonists of the series. Before his dismembering by Shigaraki, he was one of the most powerful villains in Japan.

This was because he was an evil genius with an incredibly well-thought-out plan. Furthermore, he made the best use of his superior battle skills and resources to ensure success.

Shigaraki is the leader of the League of Villains and the primary antagonist in the series. Most of his actions are dedicated to his master, All For One.

His quirk is Decay which allows them to disintegrate anything he touches with all five fingers. This disintegration works on anything ranging from living to non-living beings.

With the awakening of his quirk after fighting Gigantomachia and then Re-Destro, he possesses skills on par with All For One. Furthermore, following his surgery with Dr. Garaki, his quirks are amplified as he is being possessed by All For One.

All For One is the main controlling antagonist and the Symbol of Fear in the series. He possesses multiple quirks, one of them being Life Force which makes him immortal.

His main aim is to gain One For All, and to accomplish this; he has fought multiple Pro heroes, including All Might. After causing the Tartarus Prison Break in Shigaraki’s body, he redistributed his quirks among escapees like Lady Nagant.

Furthermore, he has a total of around 23 quirks and has given out more than 4 of them to multiple villains in the series.

Q1. Which Villains are in Tartarus?

Ans – Stain, Muscular, Moonfish, Lady Nagant, Kurogiri, Overhaul, All For One, Dictator, and multiple Nomu were imprisoned in Tartarus until the prison break.

Q2. Who are the 3 main Villains in My Hero Academia?

Ans – All For One, Shigaraki, and Overhaul are the three main My Hero Academia villains.

Q3. Which episode has villain Deku?

Ans – Villain Deku is not part of the main series. However, one can find many fan-made spin-offs of the same on Webtoon.

Q4. Who is the weakest Villain in MHA?

Ans – Spinner is most likely the weakest MHA villain.

Q5. Who is the evilest villain in MHA?

Ans – Without a doubt, All For One is the evilest villain in MHA. He has not only destroyed the lives of multiple people but is also the driving force behind all actions of the League of Villains.

Ans – Most probably, but it is not officially confirmed. His dad has fire breathing quirk.