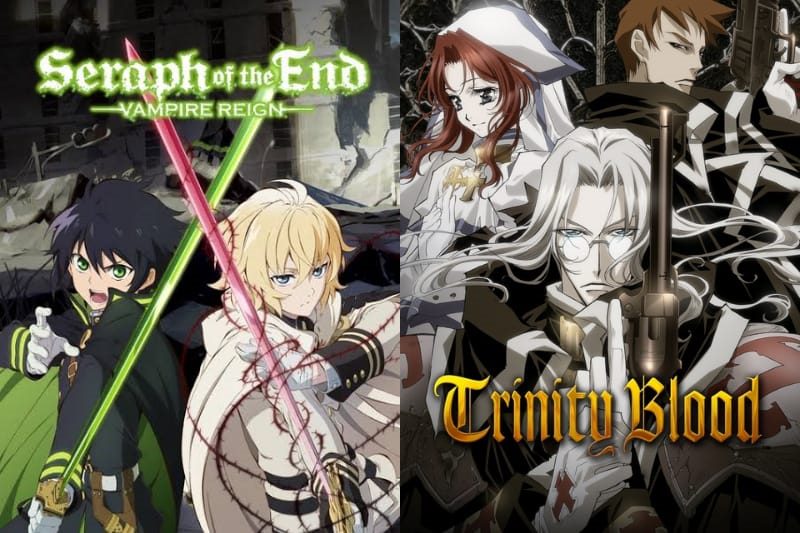 Vampire Romance anime is the best option for fans, as it explores both fantasy and romance at the same time. There are a lot of vampire anime out there, but we only found a few that are truly romantic.

So, if you are looking forward to exploring some of the best romantic relationships in the vampire world, then you have come to the right place.

In this article, we provide you with a wonderful list of the 15 best vampire romance anime of all time. So let’s get straight to the list.

Note: The ranking is done based on IMDb ratings.

Diabolik Lovers tells the story of Yui Komori, a human girl, and the strange events that occurred in her life. When she shifted to a new town, she found a mansion and met six handsome vampire men.

After that, lots of mysterious things happened to her, and she was finally kidnapped by four vampire brothers. Now it’s very interesting to explore what happened next with her and if she fell in love with one of them.

Dance with Devils is the best reverse-harem vampire anime based on the same-name manga. The plot of this anime follows Ritsuka Tachibana, a seemingly normal high school student who becomes entangled in a battle between devils and vampires at her school.

This is because devils and vampires believe that she is their last hope to obtain a powerful item that will give her the power to dominate the world.

Princess Resurrection is a popular horror-fantasy anime series. The series is set in a world where humans live in the human realm and mysterious species live in the monster realm. It does not entirely depict romance, just like other vampire romance anime.

However, its wide range of attractive female characters, including a vampire girl, and their involvement with the series’ main character makes it worth watching.

12. Dance in the Vampire Bund

Dance in the Vampire Bund is a great psychological and horror anime based on a manga of the same name. The protagonists of the story are Akira Kaburagi Regendorf, a werewolf, and Mina Tepes, the princess ruler of all vampires.

On the other hand, the narrative explores how fear on both sides alters the social order as they clash with others who seek peace as it follows the introduction of vampires into the human world.

Chibi Vampire is a very unusual vampire anime and depicts a wonderful story. Karin Maaka is a one-of-a-kind vampire girl who prefers to inject her blood into others rather than drink it. She can easily attend school during daylight and does not have any signs of vampires.

However, after meeting Kenta Usui, a new student, her physical behavior rapidly changed. After a series of events, they both come close to each other and ultimately fall in love with each other.

Devil’s Line is another great vampire romance anime. It is set in a world where vampires live alongside humans and depend on human blood to survive. When a normal human girl, Tsukasa Taira, learned of the existence of a vampire, she became shocked.

However, she falls in love with one of them, Yuuki Anzai, who is actually a hybrid of a vampire and a human. You have to explore their unusual romantic life and know why it is so popular among fans.

Kurozuka is set in a Japanese historical timeline and depicts the story of Kurou, a skilled swordsman. While escaping with his servant from some people, he, unfortunately, finds a mysterious house.

In this house, he meets Kuromitsu, who is a beautiful girl but actually a vampire. Even knowing the truth about Kuromitsu, Kurou fell in love with her and became a vampire as well.

Fortune Arterial is popular not only for its harem and fantasy elements but also for its vampire romance story. It depicts the beautiful love story between a human boy named Kohei Hasekura and a vampire girl named Erika Sendo.

Kohei recently moved to a new place to enroll in a popular school and is very shy about making friends. On the other hand, Erika is a very popular girl due to her excellence in both academics and sports.

Now it’s very interesting to see how they fall in love with each other since their personalities are completely different.

Rosario+Vampire is a harem-vampire anime that depicts the story of a mysterious school. In this school, several types of mysterious species, such as vampires, demons, fairies, and witches, enroll in human form to study.

However, Tsukune Aono, a human boy, also enrolled in this school without knowing anything. He gradually falls in love with Moka Akashiya, who is actually a vampire girl. The series is filled with romantic and comedic elements and provides the best experience.

Blood Lad depicts two worlds, the human world, and the demon world, which are connected through a portal. Staz is a vampire who lived a normal life in the demon world until meeting Fuyumi Yanagi, a human girl.

She unintentionally comes to the demon world through a portal, and after that, she is killed by a plant. Now, it’s totally up to Stanz to bring her back from the dead.

While doing that, they show us some of the cutest romantic relationships that make it a good vampire romance anime.

Strike the Blood is one of the best science-fiction vampire anime, based on the same-named light novel.

The plot of this anime follows Kojou Akatsuki, a 16-year-old boy and average high school student in Itogami Island’s Demon District, whose life is cut short after a chance meeting endows him with vampire-like skills.

It isn’t long until he is thrown into the spotlight when it is revealed that he is the fourth primogenitor, an enormously strong vampire whom most regard as a legend.

Trinity Blood is one of the great picks for you where you experience a wonderful story. It depicts a world where an apocalyptic war takes place between humans and vampires.

On the other hand, the series focuses on the ongoing cold war between the Vatican, the human government, and the government of the vampiric Methuselah. This anime is a perfect blend of science fiction, fantasy, and political intrigue that binds you to it until it ends.

Vampire Knight is one of the greatest vampire romance anime of all time. It tells the story of a young girl named Yuki who is attacked by an evil vampire until Kaname Kuran saves her.

After that moment, she develops a romantic feeling for him, even knowing he is a pure-blooded vampire. However, she lost her memory and began a new life as the vampire species’ protector.

The series is filled with mysteries that bind you until the end of the series. It is also very interesting to see how she remembers her past memories and comes together with Kaname.

2. Seraph of the End

Seraph of the End is one of the best vampire romance anime. It follows the story of a young guy named Yuichiro Hyakuya, who joins a vampire extermination unit.

This is because he wanted to recapture Mikaela from the vampires and exact revenge on them for the deaths of his orphaned family. On the other hand, Shinoa, Yuichiro’s squad member, develops a liking for him but never confesses her feelings.

Bakemonogatari is the most popular vampire romance anime. It depicts the wonderful story of Koyomi Araragi, who recently saved humanity from a vampire invasion.

When he found Hitagi Senjogahara, his classmate who was not doing well and had some mysterious problems, he brought her to Meme Oshino. Since Hitagi’s problem was solved, she became Koyomi’s girlfriend.

After that, their love story began and provided us with some of the best romantic scenes.

We’ll wrap up this article by going over each vampire romance anime on the list. This fantastic list is compiled based on their IMDb rating and fan following. We hope you like this fantastic list and stay tuned with us for more interesting anime recommendations.