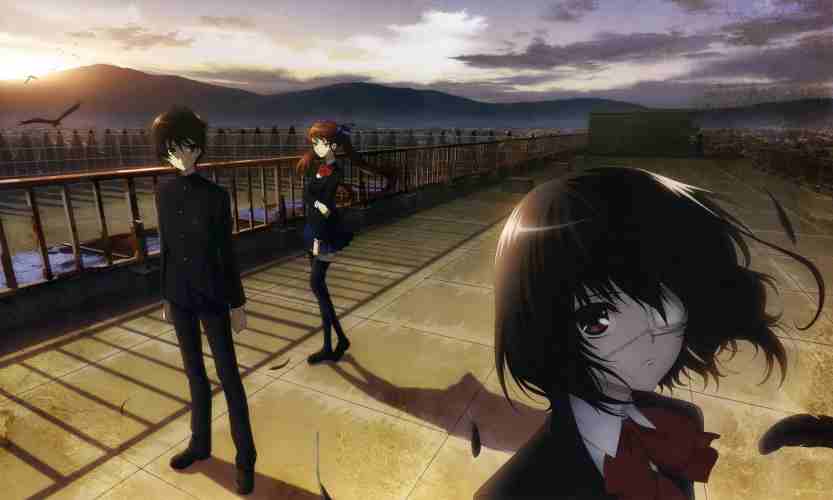 Ever felt someone was looking at you from the shadows? Too scared to go to the washroom alone at night? Then this list is not for you. When we talk of horror, it is not merely the presence of ghosts and apparitions or that distinct feeling of looking behind your shoulder. True, horror does contain all that, but that’s just a tiny part of what horror indeed is.

The fear that gets the adrenaline pumping is not of the ghosts really, but what they could do to us. The only thing people enjoy more than laughing is getting scared, and so here are the top 7 best horror anime adapted from light novels on Hulu. This is your final chance to turn back. If you still choose to continue, remember, you have been warned.

Saya Kisaragi is a peaceful high school student by day, a fearsome monster hunter by night. But her world is turned upside down when she overhears monsters speaking of a broken covenant. Things get weirder as a strange dog appears, curious to know the consequences if Kisaragi breaks her promise of protecting the village. Tormented by mysterious visions, join Kisarage in her quest to find out about the village nobody knows about.

In 1972, a student named Misaki of class 3-3, studying in Yomiyama North Middle School, passed away in an accident, and surprising ends began. Years later, the deaths stopped as mysteriously. Nobody questions it; the town just learns to accept it and move on.

Fast forward 26 years, Yomiyama North has a new student in class 3-3 when Kouichi Sakakibara joins in a transfer student, adding a new student in the middle of the turn. Once again, the mysterious deaths begin, and this time they don’t seem to stop. Even a teacher falls casualty to the curse. Can Kouichi and his friends figure out the curse and the killer before it empties the class?

Based on the best-selling light novel by Fuyumi Ono, Shiki explores the life of Megumi Shimizu, a fifteen-year-old girl who dreams of a great life in the metropolis. However, her dreams are cut short by her death in a plague which results in her death. She turns into a vampire “Abandoned by God,” or Shiki as they call themselves; the plot makes no clear distinction between good and even but brings the case of survival to the forefront.

Do humans actually lose their humanity after death? What really makes a monster? Are humans the true monsters? Shiki explores all of this, and the results might indeed turn out to surprise us.

In a future dystopic Tokyo, the flesh-eating ghouls and humans co-exist. Both groups despise each other, and the ghoul’s increasing human preying makes the police concerned. Ken Kaneki is a normal average college-going student who loves hanging out at his favorite café with his book while stealing glances at a girl he has a crush upon.

Finally, he asks the girl out on a date. Little did he know of the consequences as he was ripped out of his everyday life and thrown amid the warring ghouls and humans. Are all ghouls really bad? What about the ghoul children, it really their fault to be born that way? Join Kaneki in his search for truth and find out for yourself.

Mikado Ryuugamine wishes for everyday city life and moves in from the countryside into Tokyo. However, Tokyo is not what it seems, especially in the Ikebukuro district, where legends of a headless “black-rider” are prevalent. Ryuugamine encounters this headless rider on his first day in the city, and as supernatural incidents begin occurring, Ryuugamine is thrown into the middle of it.

This light novel by Ryohgo Narita is only getting weirder with all the descriptions and equally weird occurrences, and the natural feeling of horror arises when you look back into it and realize the roller-coaster of the ride you’ve had.

The only movie to feature on this list, this anime is based upon a semi-autobiographical novel by Akiyuki Nosaka of the same name. The horror here is not from the presence of the supernatural but the absence of life.

It follows the lives of Seita and Setsuko, orphaned during World War II, deserted to roam the Japanese countryside. A tale as much of hope and resilience as of the horrific ravages of war, the fear and depravity are brought out to the full in this masterpiece of a movie.

The horror of not being at the top of the food chain, the corruption and politics of the world, all of it resemble a fearful similarity to the modern world, and this is the world on Attack on Titan. Ages ago, mankind built a wall to protect itself from the monstrous humanoid beasts called Titans. Years later, Eren Yeager, the protagonist, loses his family on a sudden attack by the Colossal Titan and swears vengeance, and joins the survey cops. However, if you think it ends there, no, it doesn’t.

As the show progresses, it becomes more apparent that the world outside is not what it actually is, neither is the Titans what they were initially thought to be. Eren himself transforms into the Attack Titan. Do not get attached to any characters because they might just die in the next episode. The show tells the narrative of the constant living in fear with uncertainty looming large; it is an ordeal to just live through the day.

All of these are available for streaming on Hulu through VPN. A VPN is basically a Virtual Private Network, easily found on Google, and some are even available in the form of Chrome extensions. So go ahead, scare yourself with these top horror anime out there, free to stream on Hulu.