Skip to contentHome » Anime & Manga » How & Where to Watch Anime for Free? (Explained) 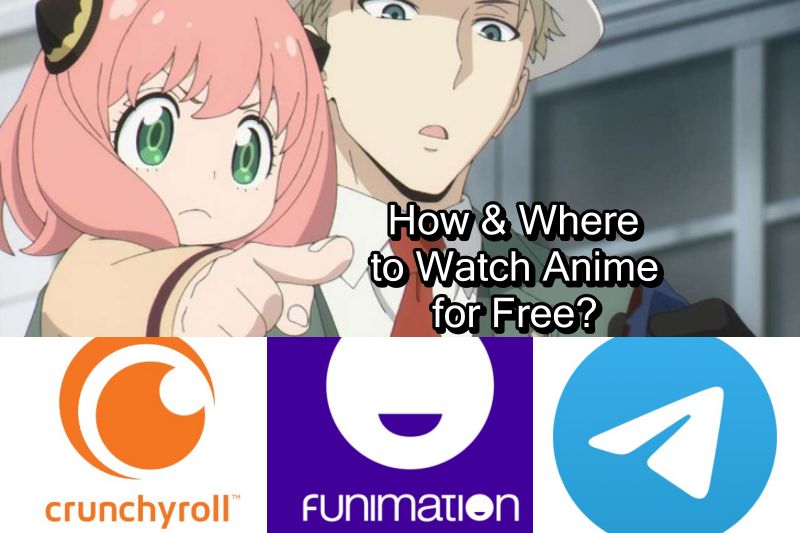 Among the popular kinds of entertainment, anime is one of them. However, it is not new, as it has been growing in popularity over the past 20 years in America. Fortunately, the introduction of giant streaming platforms and the advent of the internet have made accessibility to such crucial popular culture pieces.

It is full of suspense, adventure, and action and is always entertaining. Several such sites allow one to filter anime through language, quality, year, and season. In Asia, anime has always been famous. However, now there are fans across the globe looking to watch anime for free.

Anime refers to a particular style of cartoon inspired or produced by Japanese animation. The art style linked to anime is recognizable and unique. The anime origin is in Japan, and 1917 is the earliest Japanese art date back to. Thus, one can say it is an old kind of art that is modernized to gain an audience.

In those times, anime animation was designed by hand and grouped multiple frames to create animation. However, these days the creation of anime is done with computer-generated graphics. Probably, many people are familiar with wild hair, large eyes, long limbs and arms, and more. Emotions are expressed more easily due to such exaggerated designs.

Usually, the addition of anime’s emotional feel is the technical animation tricks. Some of them are intense lighting, brilliant colors, and dramatic zooms and closeups. But beyond its different visual look, such kind of anime has endeared itself into the fan’s heart. This is because it has engaging plotlines and complex characters.

One can take a look at the most famous Anime characters like Levi, Luffy, Edward Elric, Monkey D. Luffy, etc. Many of such characters have big heights, heads, and details on their bodies. The character’s hairstyle is usually spiky, with unnatural hairs along a lot of distinctive colors in some cases.

The importance of such characters is well-known by anime lovers. Such characters may seem unusual and dramatic to new viewers. Thus, anime is all about entertainment and imagination. Because the artist put all the images into the characters leading to dramatic and unnatural characters.

How & Where to Watch Anime for Free?

In the past few years, there has been a significant boost in the number of people who likes to watch anime. Due to this boost, there is a similar growth in the range of streaming services number to choose from. Along with so many streaming services providing distinctive channels, deciding where to watch it for free is a daunting process.

When it comes to the trial period, many platforms are providing it. The free trial period usually ranges from 7-30 days in some cases. However, many times it is of 14 days, like in the case of Funimation and Crunchyroll. The process to avail free period is the same on every platform. But in this, Crunchyroll is taken as an instance.

A 14-day Crunchyroll free trial is best for customers that are on this streaming platform. This trial is considered perfect in comparison to other available subscription plans. In case it’s not the streaming service one is looking for, then it is easy to cancel it. To avoid being charged automatically, one can end the subscription before the two weeks’ completion.

Just follow the below steps, and it will be easy to sign up for the Crunchyroll free trial:

Now, it is time to cancel the subscription before the free trial ends to avoid being charged. Just remember it will end as soon as the completion of the below steps:

It is a huge platform for anime movies and series that provides only the best quality content. Due to this, it is the fan’s favorite. One can access both dubbed and subbed versions of anime. The process is easier to search because the categorization of titles is alphabetical.

It is one of the best anime websites that usually scores at the top. In terms of ease of use, availability of content, reliability, video quality, and loading speeds. On AnimeDao, the playing video quality can be adjusted chiefly between 340-1080p. Also, the anime titles are efficiently organized to avoid any confusion to look for the title.

It is a platform used for watching animated movies. One can watch anime online and search or browse for anime by month, week, or day. The catchiest thing about Gogoanime is its collection of anime titles and simple interface. Also, the latest anime releases quickly find their way without delay on this platform.

Several free anime streaming websites along the ads for the aim of maintaining their services and servers. There is no harm as long as one doesn’t install any malware or click on such ad pages.

However, several good ad blocker tools are there for avoiding skeptical things on a page in case concerns are still. Some of the top free websites for anime are:

There are several distinct sources for watching or downloading anime. However, no one can match the accuracy and speed that is being offered by the Telegram channels.

Several anime telegram channels usually post anime stickers, movies, the latest stores, and series. Even its file size limit has been expanded to 2GB after the update.

Telegram Channels offer an allowance for sending a broadcast. But the user is required to search for the channel and then subscribe to it.

After that, one can access the messages sent by the channel creator to subscribers. People are looking for distinctive ways for downloading anime for free. Thus, it is best to look for them on Telegram Channels.

If someone wants to watch all the famous anime shows, then there is a requirement to join the best Telegram Anime Channels. Anime series and movies are uploaded regularly to such channels, and one should take advantage of them. Thus, some of the top-rated Telegram groups and channels, are mentioned below:

When it comes to Torrent, it is completely safe to use anime torrent sites for downloading files. As long as one is careful about what to download that’s why some caution is required.

Torrenting works by allowing it to become a “swarm” part. It means after start downloading a torrent file the PC will connect to other devices in large numbers sharing the same file.

So, if someone is planning to download anime torrents, then there is a need for a VPN. There are several reasons for that like to hide torrenting-related activities or to protect online privacy. Some of the anime torrent sites for downloading anime are:

Unlike in the real world, in the case of anime, good always take down evil. That’s why watching them aids in restoring optimism and aids to relax. Many people enjoy watching anime because it takes to a distinctive world of relaxation and happing. Whether someone is an adult or a kid, no one can describe the experience of watching anime online.

However, if someone is frugal with money, other great options are also out there. The first one is the trial period through which anime can be enjoyed from official sites. Free websites and apps are also mentioned above to watch anime for free. Even Telegram and Torrent are doing well in providing free anime.