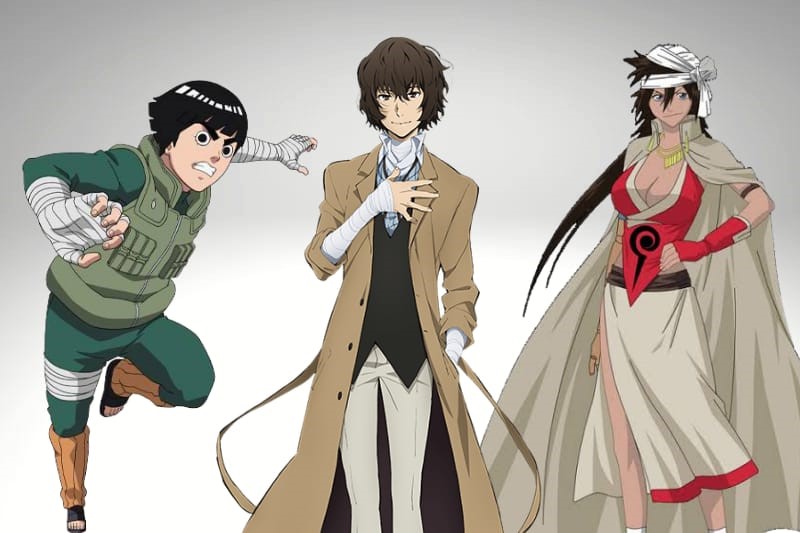 Anime characters with bandages have a unique yet attractive look. In the real world, persons wearing bandages imply that they have been hurt or have broken bones. However, in the anime world, they serve the same job as we do, but they look more attractive with bandages.

We can say that bandages are one of the most popular fashion accessories in the anime world. So, without any further delay, let’s have a look at this list of the top 15 attractive anime characters with bandages as of 2022.

Kamina is the second main character in the Tengen Toppa Gurren Lagann series. He is a tough yet stylish guy, and he wrapped up his arms and waist with bandages.

Kamina tries to act like an arrogant guy, but he is a nice guy and a determined individual. He possessed superior swordsmanship skills, supernatural power, and a keen battle IQ.

Simon is the lead character in the Tengen Toppa Gurren Lagann series. He is an attractive young guy with a kind and loving personality.

Simon wrapped up his waist with bandages and sported fancy sunglasses. He possessed a variety of skills and powers, such as space-time rupturing, teleportation, shockwave, energy detection, attack reflection, and many more. As a result, he became one of the most powerful anime characters with bandages.

Megumin is one of the lead characters in KonoSuba, one of the well-known Isekai anime series. She is a cute young girl with a lively and childlike personality.

Megumin covers her right legs with bandages and usually wears a witch’s attire. She is regarded as one of the most attractive anime characters with bandages for her cute look and fancy outfits. Apart from her attractive looks, she is one of the strongest wizards with her rare yet powerful explosive magic. She also excellently used other magical spells throughout the series.

Suruga Kanbaru is one of the major characters in the Bakemonogatari series. She is a young girl with an attractive body and beautiful looks.

Suruga always covers her entire left arm with bandages to hide her oddities (supernatural powers). She often wears boy-type outfits and shows more affection towards girls than boys. Her exceptional basketball skills make her one of the most skilled players on her school team.

Nice is the main character of the series and the most powerful minimum holder of the series. He wears bandages over several parts of his body, such as his nose, cheeks, and arms.

Nice runs his detective agency, Hamatora Detective Agency, alongside his friend, Hajime. His special ability allows him to transform into sound waves and allows him to travel through different wavelengths. He is regarded as one of the most attractive anime characters with bandages due to his attractive and fashionable looks.

Bonolenov Ndongo is one of the members of Phantom Troupe, the most fearsome group in the Hunter x Hunter series. He wears bandages over his entire body and looks like an Egyptian mummy.

Bonolenov is a Conjuration-type nen user with incredibly powerful abilities like Prologue and Jupiter. He doesn’t get as much screen time in the series as his fellow troupe members. However, he caught a lot of attention from fans due to his unique look with bandages. As a consequence, he is recognized as one of the most popular anime characters with bandages.

Stain is a minor character in the My Hero Academia series. He is mostly known by his villain name, Hero Killer: Stain, while his original name is Chizome Akaguro.

Stain covers his arms with yellow bandages and also sports a blood-red scarf over his neck. He is a very cold-hearted and unforgivable person and wants to destroy all false heroes. As a result, he kills several pro-heroes and gets his villain named Hero Killer. His quirk is “Blood Curdle,” which allows him to paralyze his target by just tasting their blood.

Dororo is the travel companion of Hyakkimaru’s thrilling adventure in the Dororo anime and manga series. He lived the life of a thief, stealing people’s things to survive until he met Hyakkimaru.

Dororo wears white bandages over his ankles, and wrists. He is such a big troublemaker for Hyakkimaru and this causes several problems for him. Throughout the series, he did several mischievous things, which is why he got lots of love from the fans.

Anime: Magi The Kingdom of Magic

Aladdin is the lead character in Magi: The Kingdom of Magic, a well-known magical and fantasy anime series. He is a young guy with short body stature and attractive looks.

Aladdin always wrapped up his chest with bandages and also wore a magical turban on his head. His personality is kind of charming and helpful. He possesses various divine powers since he is the son of King Solomon, the creator of the universe. He is also capable of using powerful magical abilities to the fullest extent.

Zabuza Momochi is one of the major characters in the Naruto franchise. He is one of the strongest ninjas among the Seven Ninja Swordsmen of the Mist, a powerful group of ninjas.

Zabuza is a well-built guy and covers half of his face with bandages that seem like a white mask. He initially appeared as a charming guy, but after a series of events, he turned into a distrustful person. Throughout the series, he quickly defeated countless expert ninjas by utilizing his outstanding ninja skills.

Kukaku Shiba is one of the major characters in the Bleach series and the leader of the Shiba clan. She is a beautiful young lady with an attractive body and an aggressive personality.

Kukaku wears bandages over her hair and also around her right shoulder and both ankles. She is an exceptionally strong and skilled fighter and possesses high spiritual powers. Her extraordinary physical strength and skill with explosives (Fire Works) make her a well-liked character in the series.

Rock Lee is one of the most popular characters in the Naruto franchise and the inheritor of the Lee clan. He always wrapped his arms with bandages to cover the stitches that he got during his tough training.

Rock Lee is a good guy who never holds any grudges against anyone and believes in forgiveness. Despite having a lack of ninja skills, he became one of the most powerful ninjas through his hard work and determination.

Zack is the second main character in the Angel of Death series. He looks like a villain and usually wears a fashionable black hoodie that suits him the most.

Zack always covered his entire body with bandages to hide his burned skin. As a serial killer, he is quite merciless and brutal. He had extraordinary survival instincts as a result of being raised as an orphan, which helped him deal with huge issues.

Eto Yoshimura is the most powerful, as well as one of the most attractive anime characters with bandages. She is the founder of the Aogiri Tree, an evil ghoul organization, and one of the major villains in the Tokyo Ghoul series.

Eto was originally a One-Eyed Owl, but she kept her real identity hidden and lived as Sen Takatsuki, a novelist. In her human identity, she is quite a beautiful young girl with an attractive body and looks. While working in Aogiri, she wears bandages across her entire body, from toe to face. She is a psychopath and never hesitates to take people’s lives to achieve her goals.

Dazai Osamu is the second main character of the Bungou Stray Dogs. However, he is more popular than Atsushi Nakajima, the series’s main character. He is a very intelligent guy with a cold personality and a stylish look.

Dazai’s entire body is massively damaged due to his continuous attempts to commit suicide. As a result, he wears bandages over his entire body except for his hands, feet, and face. Due to his being merciless and brutal, he succeeded in becoming the leader of the mafia at a very young age. His harsh attitude and massive popularity make him one of the most recognizable anime characters with bandages.

We’ll conclude this article by discussing every single character on the list who wears bandages. This fantastic list was prepared based on their popularity and attractiveness. Some of them wear bandages to cure their wounds, while others wear them to hide their identities.