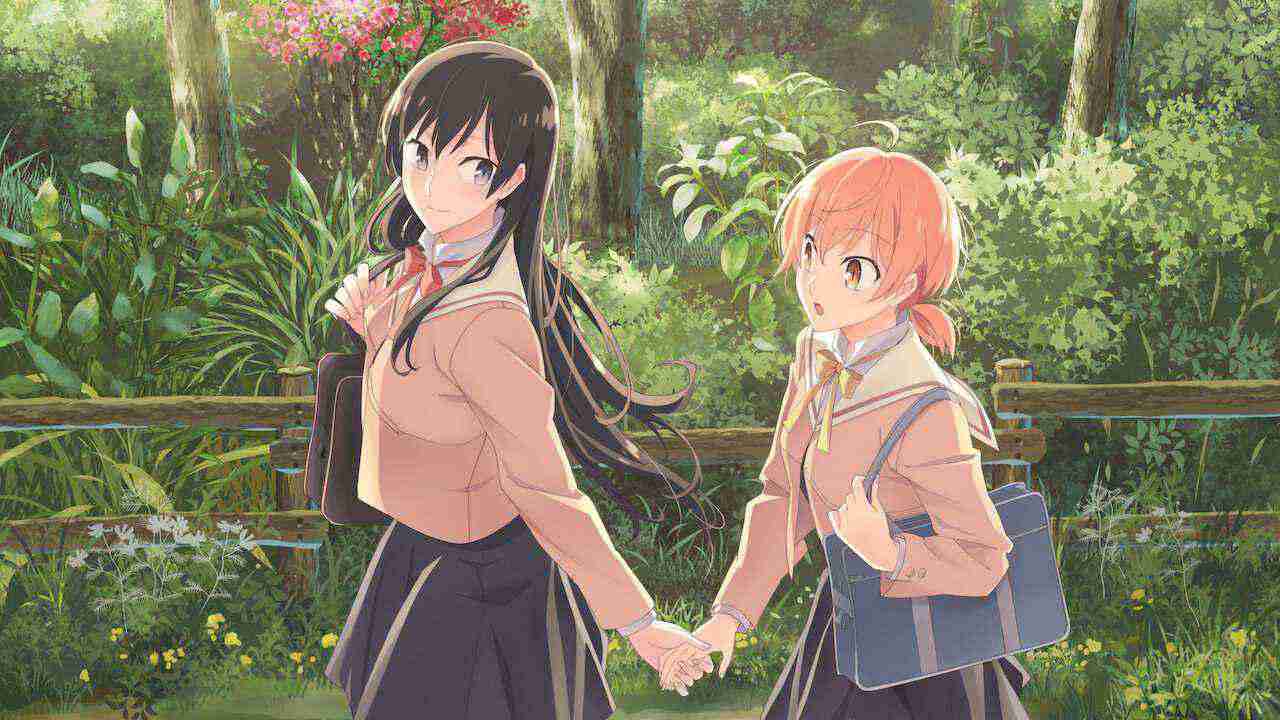 Note: This article is updated based on new knowledge.

Today numerous viewers are facing a common problem that many Yuri anime are available on private sites.

That’s why we have made a ranking list of all the best Yuri Available, which are available on the official websites like Crunchyroll, Netflix, Hulu & Funimation.

These anime are much focused on the Shoujo because we are only taking the official sites.

In order to watch those ranked anime, one has to purchase the subscriptions for these sites. So, let’s begin.

Below we have ranked the best Yuri Anime on Crunchyroll, Netflix, Hulu, and Funimation, depending on the availability.

The ranking is done based on the myanimelist score so that we can get unbiased rankings.

Maximum of the anime is available on Crunchyroll & Funimation, but unfortunately for Hulu & Netflix, we don’t have many options, especially for Yuri anime.

One day they went for a group date with their respective boyfriends, where Hotaru helped Yuma to get rid of nervousness from boys in private.

Plot- A high school girl, Hanabi Natsuno, decides to move into a boarding house for female students, where she meets her childhood friend, Konomi Fujiwara.

As a newcomer, she has become the center of affection for everyone, and from there, she realizes that this year is going to be an interesting one.

Plot- A wild and exciting story of an introvert and an extrovert girl. Yachiyo Inugami & Suzu Nekoyama are linked by destiny become friends unexpectedly.

They start liking each other because of their opposite nature, and their friendship turns into a relationship.

Plot- The story begins when two best friends, Haruka Takayama and Yuu Sonoda, take admission to Misato West High School, which will shut down in the next three years.

So, they both decide to make the best memories with each other.

Yuu’s outward behavior attracts many female students in the class. So, Haruka, to not lose her friend, affectionately kisses Yuu in the empty class. A

nd from this incident, their bond changes from friendship to relationship.

Plot- The story revolves around the two girls, Murasame Sumika, the extremely popular one, and Kazama Ushio, the normal one.

Sumika falls in love with Ushio, but the twist is Ushio, who doesn’t know anything, also likes Girls love but always gets rejected by other girls.

Plot- The story proves that one can fall in love with another despite being a language barrier.

The protagonist, Shinobu Oomiya, made a friend in England, Alice Cartelet, for some time.

However, 5 years later, Alice came to Japan to attend Shinobu’s high school and living with Shinobu in the same house along with new friends,

Plot- Finally, something from a different world. A fox girl named Yuzu works as an attendant in the Spirit World.

Her cheerful nature brings an attractive charm to the customers as well as the fellow workers.

Here we get a story of a fox girl who loves to spend time with her friends in the mysterious world of spirits.

Plot- An eccentric comedy life of Akari Akaza who reunites with her seniors, Yui Funami and Kyouko Toshinou. They formed the “Amusement Club” for the Tea-Parties.

Another girl, Chinatsu Yoshikawa, joins the club along with them. Now they all form a bond that is greater than “Friendship.“

This concludes the list of the best Yuri anime on Crunchyroll. Some of the discussed anime are also available on Funimation.

Fans can choose the streaming sites at their convenience. To know more on how to fix any Crunchyroll Issue, visit the link below.

Plot- The must-watch story of stepsisters of opposite nature.

Yuzu Aihara, whose mother is newly remarried, transfers into the new school where she encounters Mei Aihara, the most beautiful girl and the president of the imposing student council.

Later on, she discovers that Mei is her stepsister. Mei likes to tease girls, so one day, she forcefully kisses her after pounding her to the ground.

Now every day, Mei teases Yuzu with her new routines.

The Academy educates them on the art of dealing with money and manipulating people.

The one who is an expert in gambling dominates the other one. This is the must-watch series on Netflix.

Plot- Another top Yuri anime, Bloom Into You, involves a story of a high school girl, Yuu Koito, who is patiently waiting for her love life.

One day she meets student council president, Touko Nanami who change her life. In the end, they confess love for each other, and their bond of friendship turns into a relationship.

Kyuubey grants them an offer to become one of the magical girls and have the power to fulfill their every dream.

However, Homura Akemi, a magical girl, warns them that they have to pay the price in exchange for Kyuubey’s offer by sacrificing their friends and family.

This concludes the list of all Yuri Anime on Netflix.

However, Puella Magi Madoka Magica & Kakegurui are not particularly the Yuri Anime; however, the theme and plot of these two anime are dominantly focused on girls, which viewers love to watch.

Here, we have inserted the link to the other anime categories available on Netflix.

Before proceeding, let us inform you that no proper Yuri/Shoujo Anime is available on Hulu. But there are many girls’ protagonist anime with a great plot.

Plot- A story of a war between an alien force and humanity.

The Azure Lane is formed by the alliance of four different countries, Eagle Union, Royal Navy, Sakura Empire, and Iron-Blood.

However, due to opposing ideals, two countries broke and formed another alliance, named Red Axis. Now, what will happen to the war?

Plot- The story revolves around a boy named Kinji, who is a great detective from Tokyo Butei High.

He was enjoying his peaceful life until he becomes the target for the infamous “Butei Killer.“

At that time, Aria Holmes Kanzaki saves his life in exchange for becoming her partner. And from this, the story takes a great turn.

Plot- It is a magical story of two girls, Madoka Kaname & Sayaka Miki, who live their best lives with friends and families.

One day they encounter a magical cat, Kyuubey, who offers them to become a magical girl and accomplish anything in life. It is a great deal for both the girls.

However, Homura Akemi, the previous magical girl, alerts them that it is not as simple as they think.

They have to sacrifice a lot of things to become a magical girl. Now, what will they do?

This concludes best Girl Anime on Hulu. We are pretty sure that you enjoy it a lot because these are one of the most popular girl anime of all time.

Plot- A 16 years old girl, Mamori Tokonome, is living a boring life like other ordinary students. One day she got kidnapped during her class.

Then, she wakes up on an exotic Mermaid Island where she is under attack. Mirei Shikishima, a magical mermaid, saves and kisses her.

Through that kiss, she awakens Mamori’s Exter transformation abilities and forms her into a weapon. And from this, Mamori’s life has changed.

Plot- The story of an Elite Myoujou Academy, where 11 girls are on the mission to assassinate their classmate Haru Ichinose.

The one who fails to assassinate will be expelled, and the successful one will be granted any wish. Every individual will get one chance.

Tokaku Azuma, a transfer student, is one of the 11 girls who are on the mission.

However, when she meets Haru, her interest is drawn towards her. And despite crushing, she decides to protect her.

Plot- This is a story of a normal boy, Hazumu, who enjoys his normal life. He is in love with Yasuna.

One day he decides to confess his love to her, but she rejected him.

In the depression, he went to Mt. Kashimayama, where he lost. A magical tragedy happened to him, and he becomes a girl.

Plot- The story of two lovers Kureha Tsubaki and Sumika Izumino, who live in a two civilizations world, humans and bears.

These two civilizations are separated by the “Wall of Severance” to maintain peace.

Instead of eliminating her, Ginko is taking an interest in her.

Fumi Manjoume & Akira Okudaira were the best friends in elementary school; however, their relationship has changed in the Matsuoka Girls’ High School.

But Akira wants her friendship in the High School too. So, how will these girls come close to each other?

Plot- The story of the two girls whose friendship is now turning into a relationship. S

akura Adachi and Hougetsu Shimamura are the students who have feelings for each other.

The real plot begins when one of them starts to develop feelings for the other one beyond the relationship.

Now, will this relationship bring them closer or tear them apart?

Plot- Utena Tenjou is the owner of the ring with a rose crest. She attends Ootori Academy, where she forcefully has to play a dangerous game.

The prize of this game is the Rose Bride, Anthy Himemiya, and her mysterious powers.

After winning Anthy, Utena realizes that Anthy is trapped, and there are many hidden mysteries in Ootori Academy. Now, she is on the mission to free Anthy.

As we have mentioned earlier, this list consists mostly of Shoujo or Girls Love anime. The official websites only cover Shoujo genre anime.

Valkyrie Drive: Mermaid is one of our favorite anime, which we recommend the most. Other anime like Yuru Yuri & Sakura Trick are also one of the decent Yuri anime to try.

Plot- Kämpfer has an incredible plot of the romantic gender bender genre. The story comprises when a boy named Natsuru Senō suddenly changes into a girl one night.

He discovers that he is chosen as a Kämpfer, a female fighter, and now he has to fight with other Kämpfers.

Later on, he finds out he can change in this original form at any time, and any emotional unbalance will lead to his girl form.

Even his crush, Kaede Sakura, starts to fall in love with his girl form.

Also, another twist is that he is studying in a school where girls and boys have different classrooms, so he has to change the rooms at every time intervals.

And some students are making theories that he and his girl form are dating. So, how will Natsuru advance his journey?

Till then, read other articles, and stay tuned with us.