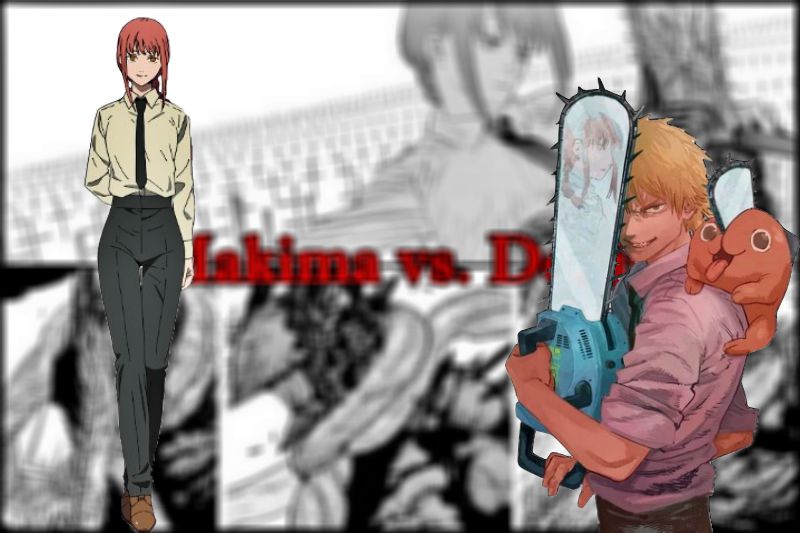 Chainsaw Man’s Makima and Denji are two of the most powerful characters in the series, with only the Darkness Devil ranking higher than them. Makima vs. Denji faceoff at the end of arc 1 was one of the most anticipated chapters since the manga began publishing.

Undeniably, in Makima vs. Denji, Denji is definitely stronger than Makima. Makima’s powers and plethora of abilities are no joke, but the sheer, raw power displayed by Denji in all three of his forms is a sight to behold. Makima is at par with Denji’s devil-hybrid form but defeating the Chainsaw Devil is near impossible.

In this post, we detail exactly who Makima and Denji are, their powers and abilities, as well as who’d win against the other based on strength, speed, durability, ability, and regeneration.

Who is Makima in Chainsaw Man?

Initially, Makima is introduced to us as the leader of the Public Safety Devil Hunter’s experimental unit, Tokyo Special Division 4. When she first sees Denji in his devil-hybrid Chainsaw Man form, she is intrigued by him and immediately sets out to train him under her wing.

To fulfill her plans that aren’t revealed to the audience just yet, she takes advantage of his feelings and plots to make him even more dependent on her. She becomes an ideal girlfriend or even a motherly figure. She even threatens to eliminate him if he ever tries to leave the division.

Throughout the series, she displays a genius level of intelligence and manipulates almost everyone in her division.

Is Makima a Devil in Chainsaw Man?

Yes, Makima is a Devil in the Chainsaw Man series. She is neither a devil-hybrid nor a devil fiend but a pure Control Devil who simply looks like a human. She is the primary antagonist of the first arc of the series.

Being as old as humanity, she is the direct manifestation of humanity’s fear of control. As a pure Devil, she has a variety of skills and abilities at her disposal, ranging from immortality and force manipulation to sheer strength and speed.

She admires the Chainsaw Devil that lives inside Denji’s body and wants to use his Devil Erasure powers to eliminate all devils that plague humanity. However, she doesn’t mind being defeated by him and even considers it an honor to be eaten by him!

Who is Denji in Chainsaw Man?

Denji is a devil-hybrid contracted with Pochita, the original Chainsaw Man. Denji is a simple guy who wants a hot girlfriend. His actions are always motivated by his se*ual desire. He lived a harsh life under the yakuzas and even had to sell his kidney and eye to pay back his father’s debts.

The devil-hybrid form is a result of his merging with Pochita. There’s a small cord on his chest when pulled, extends chainsaws on his head, arms, and even feet. He uses a large amount of blood to fight and has complete control over himself, only borrowing Pochita’s power.

In the full-devil form, Denji takes a backseat, and Pochita is in complete control, making this the most powerful form.

Makima vs. Denji: Is Denji stronger than Makima? 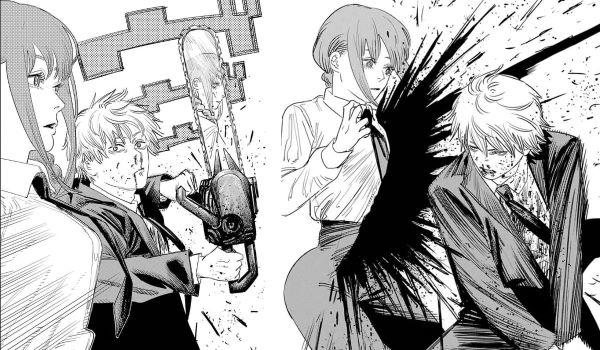 Yes, Denji is stronger than Makima. Ever since Makima set her eyes on Denji, she was hell-bent on using him to create her ideal world. She plans for every step and is a brilliant antagonist. She has an incredible set of skills and abilities, evident in how she was able to severely harm the Darkness Devil.

Denji, on the other hand, is a devil-hybrid whose full potential is just as impossible to defeat. His contract establishes him as the reincarnation of the Chainsaw Devil. One of the most potent devils, his victory over all the devils in Hell is evidence of his great power.

Going head to head in a Makima vs. Denji battle Chainsaw Man finally defeats Makima only with the generous help of Power and Pochita.

Makima and Denji have similar strength profiles, but in his Chainsaw Devil form, Denji’s strike strength gains a massive boost. He can defeat multiple Hybrid Devils in a matter of seconds. In hell, the Chainsaw Devil was able to defeat every demon living there.

In his devil-hybrid form, Denji is so strong that he even goes as far as to avoid any contact through touch after an incident where his small movements killed a few locals.

Ultimately, in a Makima vs. Denji fight based on strength, Denji would surely win!

Once again, Makima’s speeds are on par with Denji’s devil-hybrid form. However, Denji attains hypersonic speeds with his Chainsaw Devil form.

With this speed, he was able to blitz Makima and her team of Devils before they could even react. He was even able to protect Kobeni from a spear attack by Makima. He was so fast that it seemed like he was teleporting! Based on speed, it’s Denji for the win again!

As the Control Devil, Makima has various devil-hybrids, fiends, and influential humans under her control. In a fight based on abilities, Makima’s lengthy list of skills and powers is surely a plus. Moreover, her contract with the Prime Minister of Japan would certainly provide an edge.

However, we must take into consideration the Chainsaw Devil’s Devil Erasure ability! This ability itself is the only reason why Makima even acknowledges Denji and considers him a worthy opponent. She can’t control Denji and even considers it an honor to be defeated by him.

In the final battle between Denji and Makima, Denji is only able to win against Makima as he unleashes the Chainsaw Devil form and utilizes his contract with Power that grants him the ability to manipulate blood. This specific attack allowed him to slow down her regenerative abilities.

After dealing with such a critical attack, it was only through cooking and eating her that she could finally be defeated! It’s a tough battle, but Denji would claim victory.

Denji’s devil-hybrid form and Makima have similar durability. Although it’s a tough battle, Denji would definitely last longer in a fight. Denji has survived multiple critical, life-ending blows and was even able to survive Makima’s Thousand Year Spear attack.

He can take point-blank blasts from devils like Bat Devil, Bomb Hybrid, and more. He was able to keep fighting with the Eternity Devil for three days and Santa Claus even when set on fire. In this form, he even defeated Makima 26 times in Hell.

In his most powerful state, he’s basically immune to pain!

Makima’s regenerative abilities are tough to beat but not impossible! Makima’s contract with the Japanese Prime Minister basically means she’s immortal. Denji, too was able to regenerate even after being shot into space by Makima!

As long as the cord on his chest is pulled, Denji can come back to life. His fight with the Curse Devil is also proof of how strong his regenerative abilities are. He was able to come back to life with no damage at all, even after being blown up. He can even regenerate into copies of himself!

To conclude, in a Makima vs Denji battle, Denji is a sure winner in all five categories. The manga’s first arc ended with a definite answer to this question.

However, since Denji ate Makima, not in his Chainsaw Devil form, but his human form, Makima was able to reincarnate as a small child, Nayuta. Nayuta has no memories of who she was as Makima and is now under the care of Denji.