Skip to contentHome » Anime & Manga » Ichigo vs Makima: Who would win in a one-on-one Fight? 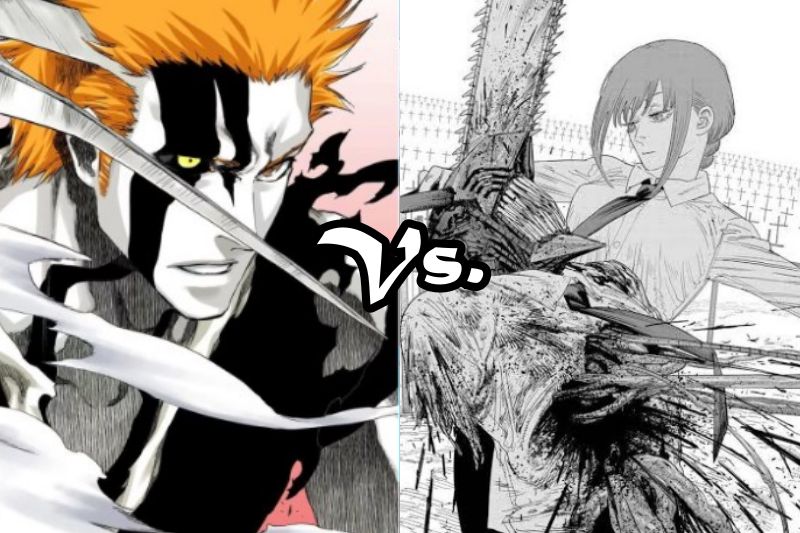 Ichigo, one of the strongest characters in Bleach put against Makima, is host to one of the most powerful demons in Chainsaw Man. Wouldn’t it be an interesting fight to take a look at both these characters pitted up against each other?

In a bout of Ichigo vs. Makima, the winner would undoubtedly be Ichigo, as he has superior raw stats and fighting capabilities than the latter.

Makima is one of the strongest individuals in the Chainsaw Man series, but that does not mean anything to Ichigo, who defeated the Almighty Yhwach and Immortal Aizen.

Later in this post, we will look at both of these characters’ abilities and powers in detail.

Ichigo, one of the strongest characters in Bleach overall, possesses a powerful Shikai and a Bankai powerful enough to intimidate Yhwach. He has a vast quantity of Reiatsu and fighting ability, along with having increased intelligence in battle.

Ichigo is strong enough to level up mountains with just the shockwave of his strikes. He came on par with Aizen in raw strength during his Final Getsuga Tensho form.

Ichigo’s power is derived from his unique triple nature of Quincy, Hollow, and Shinigami in the whole series. He can channel power from his Quincy nature to funnel his Shinigami and Hollow forms, to become even more powerful than using only one nature at once.

Makima is one of the strongest as well as one of the hottest characters in Chainsaw Man. She possesses a vast amount of lifelines for her, making her nearly invincible.

Makima’s sheer raw strength was powerful enough to send Denji into space with just a simple move of her. She can kill anyone with ease as long as she knows their name and that they are inferior to her.

She hosts a powerful devil inside of her, and with her experience, she drags out the most efficient usage of the devil’s power, which makes her an extremely powerful foe in battle.

The most threatening power of Makima should be her manipulating skills, through which she finds he way through most situations and blend in easily.

Ichigo vs. Makima: Who is Stronger?

It is easy to perceive that Ichigo has the upper hand over Makima in powers as well as abilities. Makima is more durable and does show good strength, but that will be in vain as Ichigo is too much faster and stronger.

Makima has her 126 million lives to help her cheat death, but Ichigo can cut up all of the spare lives faster than Makima could realize.

Her techniques also might not be of much help, as she will be stripped of one of her instant kill techniques due to the lack of a shrine or a sacrifice in a one-on-one fight.

Ichigo, on the other hand, need not even use much of his power to start chipping away at Makima’s life and overpowering her in raw strength and speed.

Ichigo easily wins this round, overpowering Aizen in raw strength in his Final Getsuga Tensho form. Aizen has some of the most powerful raw attributes, like strength and speed, in Bleach, and Ichigo came very close to stealing that position away.

Makima has proved her strength, killing Power in one shot and shooting Denji into space with a small gesture of her hand. She pulls this off effortlessly, and this is an invincible force, making it harder for the enemy to dodge or parry it.

But at the end of the day, it is for naught if she cannot hit Ichigo with his durability, fighting sense, and speed, and Ichigo end up being the winner.

Another easy win for Ichigo, as he is faster than the speed of light and was easily able to avoid Lightning strikes. This also further elevates his reflexes and gives him more time to make rational decisions in a fight.

Makima should be way slower than Ichigo, and she did not show much of her ability with speed. She may not be able to even catch a glimpse of Ichigo’s speed and easily fall prey to all of his attacks.

This makes the battle almost one-sided as Ichigo moves faster than Makima can realize, killing her easily in an effective strike, which grants him a favorable position in their battle.

Factoring in this, we have Ichigo, on the other hand, who has a variety of abilities, to which he can either maintain a long-range or a short-range battle as he pleases.

This will be a major factor for Ichigo’s win during their fight, as Makima will only have a limited amount of attack patterns. It would be easy for Ichigo to analyze and get over them to best Makima.

This is one of the areas where Makima trumps as killing her requires a pre-requisite of killing 126 million lives. She would be able to just push her death on some random person, and she would come back, rising to the battlefield.

Ichigo puts up a great shield Blut Vene, which can effectively heal him too, but that is nothing compared to Makima’s concept of having spare lives to cheat death.

Closing off the curtain on Ichigo vs. Makima, we can see how Ichigo is superior to Makima in many aspects and will be able to easily beat her in a one-on-one fight.

We will be concluding our article on Ichigo vs. Makima now that we have a winner decided after analyzing both the character’s powers and abilities.