Skip to contentHome » Anime & Manga » Denji vs Ichigo: Who is Stronger and Why? 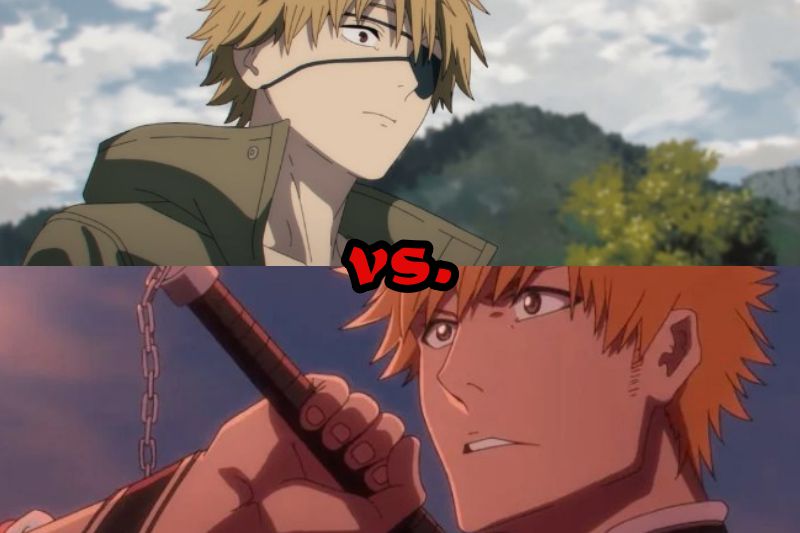 Ichigo and Denji are the protagonists from two of the most popular shounen Bleach and Chainsaw Man, respectively. Both of them are powerhouses in their respective anime and have a pretty good reputation.

Facing them against each other in Denji vs. Ichigo, there is little doubt that Ichigo will win this match with his relentless will and power. Ichigo is superior to Denji in almost all aspects and can keep cutting down Denji till he dies.

Denji does not have any counter to Ichigo’s abilities, and he will have to face them head-on, which will be chipping away at his life, little at a time.

Denji is a human as well as a devil who can borrow some of the chainsaw devil’s abilities. Doing this lends him a lot of power and speed, which he cannot normally achieve.

Initially shown as a thick-headed person, Denji does have a keen eye for battle and knows exactly what to do to win a battle. The devil which whom he is in a contract is also greatly feared by other devils and people alike.

His initial years with the mafia had already taught him pain, endurance, and immunity to many things. Denji is a near-invincible entity with super speed, strength, and extremely powerful chainsaws that can slice through anything like butter.

Denji is a very laid-back person who only cares for Makima and tries to impress her. He would gladly do anything for his friends and acquaintances due to his strong nature.

Ichigo is one of the strongest characters in the series, and his powers are a combination of his Quincy, Hollow, and Shinigami nature. His Reiatsu is even greater than that of captain level, and he became a fearful opponent after mastering Reiatsu control.

With his power and abilities, he can put up great fights, which we witnessed on multiple occasions, and he managed to outwit and defeat his opponents.

He has immense strength, super speed, and durability. Not only this, but he is also a Shunpo master and an expert in martial arts as well as with the sword. He is a pretty tough opponent to fight against because of his numerous abilities and skills.

Ichigo’s power was even feared by the Almighty Yhwach, and the latter replied by fighting with his full power and shattering Ichigo’s True Bankai because of its fearful nature.

Denji vs. Ichigo: Who will win and Why?

Denji vs. Ichigo will be a pretty long battle as the former will be able to regenerate because of his devil nature and will keep regenerating every time he gets cut down by Ichigo.

As for the other attributes, Ichigo beats Denji in everything else and stands superior to Denji with all of his showcases of speed and strength.

The problems which Denji creates with his attack patterns and regeneration will also be short-lived as Ichigo has many counters to Denji’s short-range chainsaw attacks and will use ranged attacks to best Denji.

Denji holds no candle to Ichigo in terms of raw strength or speed and will be instantly knocked out due to Ichigo being faster than the speed of light.

This is an easy battle for Ichigo, with his innate ability for raw strength and combat, as he was able to fight on par with the Almighty Yhwach. Denji is powerful and does possess super strength, but that would almost be null compared to Ichigo’s superior raw strength.

Strength battles are almost an easy win for Ichigo, with his numerous feats and possessing an unnatural growth rate throughout the whole series.

Another easy win for Ichigo, Ichigo is shown to be way faster than the speed of light and can create afterimages with his speed. He was also easily able to dodge lightning attacks breaking no sweat with just his Shunpo skills.

Denji, on the other hand, is way slower compared to Ichigo in terms of speed, and he will not be able to comprehend the latter speed, even after he finishes his next attack pattern.

Ichigo wins again here, having more abilities fit for different purposes, which he unleashes according to the situation. He has both short and long-range attacks, which will be able to easily overpower Denji in raw strength and speed alone.

Denji, on the other hand, has limited usage and attacks with his chainsaws, as he needs to draw in his opponents for a close-quarter fight to make full use of his skills.

This is one of the only limitations to Denji’s skillset, and Ichigo will be able to finish the match before Denji even starts showcasing his true potential.

Denji is more durable, as he can be able to regenerate when he consumes blood. Ichigo does have the Quincy shield, but that is limited usage, and the healing works only as a stopgap measure.

Denji will be able to regenerate and stay in his form when he has enough blood and will be instantly regenerated when he just consumes a bit of blood. This puts him at a big advantage over Ichigo, which will let him prolong the battle.

Closing the curtain on our Denji vs. Ichigo battle, we have Ichigo winning over Denji for the duration of the whole prolonged battle. Denji still needs to be way more powerful, to be on the same level as Ichigo and fight him on equal terms.

Ichigo, meanwhile, gets stronger each time, surprising the cast from Bleach every time. He is one of the strongest characters in Bleach for a reason, and that title of his might not be bested by anyone sometime soon.