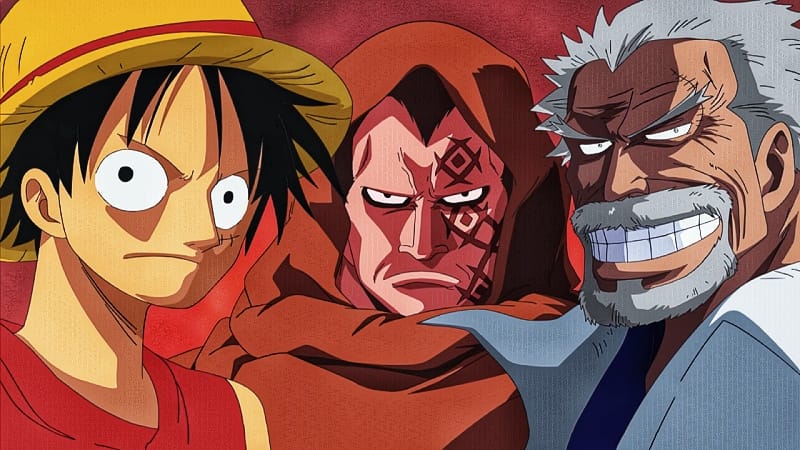 Note- This article is updated based on new theories and knowledge.

Monkey D. Dragon is Luffy’s father, one of the most mysterious characters and the most wanted man in the history of the One Piece series.  He was introduced after the mysterious events that happened in Loguetown, a city on the Polestar Islands. He was the one behind the unusual behaviour of the weather.

One Piece series has displayed a glimpse of Monkey D. Dragon’s power in different segments. But there is no official confirmation of his real power or ability. Some fans have predicted that it is not the power of his devil fruit. He has possessed the power of Uranus, one of the three Ancient Weapons. However, in our opinion, it’s not Uranus; instead, it is his Devil Fruit’s powers. Many theories have already been made on this. Therefore, in this post, we will discuss some of the best theories regarding the mystery of Monkey D. Dragon’s Devil Fruit.

Many fans have assumed that he has some kind of devil fruit that grants him the ability to manipulate wind. When Dragon saved Sabo, he was on the small tornado and controlling it perfectly.

Also, in Loguetown, he manipulated wind to save Luffy from Smoker. Wherever Dragon goes, we have witnessed a sudden change in the weather. Hence, we can assume that his devil fruit gives him the power to control wind energy or climate. But the question arises, is this Zoan or Logia type devil fruit, and how can he control lighting?

A fan on Reddit has posted a voting discussion on the type of fruit he has. Nearly 80 percent of the fans have voted on Wind-a Logia type devil fruit. There is a chance that it is a Logia type. As we have seen, all the natural elements’ devil fruit is Logia. This makes sense.

Must Read- Top 7 Characters who can overpower Gol D. Roger in One Piece

On the contrary, some fans have discussed that he has a Mythical Bird Zoan type devil fruit. It can be the Mythical Thunderbird that can control the lightning and wind simultaneously. It is confirmed that Dragon can manipulate the winds.

But what about containing other elements? If we take the example of the Loguetown once again, we have seen an attack of thunder during Luffy’s execution. The series has not confirmed that Dragon also did the lightning. But if it is true, we can assume that he has the power to control the weather. Therefore, in my view, he either has the Weather-Weather/ Wind-Wind Logia type Devil fruit or Thunderbird Mythical-Zoan type Devil Fruit.

In the recent chapter, the series unveiled a tattoo below King’s left eye. And it is also revealed that King is a Lunarian. Also, in the Skypia arc, we witnessed different tattoo designs on Skypians. Therefore, there is a probability that Dragon’s tattoo holds some mystery that is related to the Skypia or some other tribe.

In the Loguetown during Luffy’s execution, Dragon manipulated weather. So maybe this is the ability that he gained from some tribe.

There is one more theory. In my previous “Story of Joyboy” article, I’ve discussed a theory on “Will of D” where I mentioned that maybe Will of D is nothing but the truth that the D people can eat two or more devil fruits. And only Blackbeard, World Government, and Doflamingo know this truth. Hence according to this “Will of D,” there is a possibility that Dragon also ate two devil fruits like Blackbeard and can use its power according to the circumstances.

I know this theory has a little bit possibility. Although, many fans are still on the discussion that he has a Mythical Zoan Fruit and lighting and wind manipulation are his fruit’s abilities.

Well, everything discussed is a theory. Now, it’s up to Oda sensei how he will unveil the Devil Fruit of Monkey D. Dragon. Hope you might have enjoyed it!