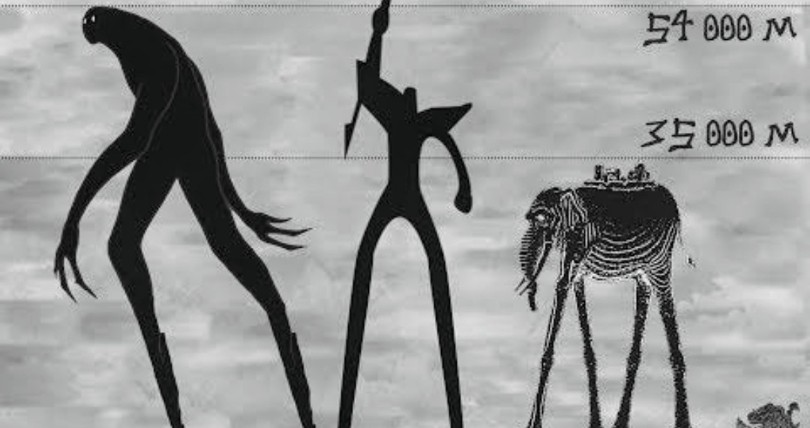 Note- This article is updated based on new theories and knowledge.

Only 1% of the Pirates can pass through the Florian Triangle. So, the question arises, how did Luffy and others cross through it? How did Thriller Bark and Brook’s ship survive in this area for more than 10 years? And what are those gigantic figures in the Florian Triangle that we had witnessed in the end? Therefore, in this post, we will discuss the answer to all these questions.

But what about the death of the pirates. People have confirmed that the Florian Triangle has destroyed hundreds of crews. We know Gecko Moria took the shadows, but he never eliminated anyone. And there was no report of people being eliminated by the sunlight as per the chapter.

Therefore, there is something in the region which have exterminated thousands of people. The series has shown the three most prominent mysterious figures with the red glowing eyes in the middle of the Florian Triangle.

Mysterious Figures in the Florian Triangle-

When Luffy and others escaped from the Thriller Bark, the series unveiled the three prominent mysterious figures in the fog. Those figures were even enormous than the shadows of Skypieans.

So, what were those figures? And why did they appear after the ending of the Thriller Bark fight?

Even the One Piece series hasn’t unveiled anything regarding this.

In accordance with this event, fans have made many theories—a prediction posted on various discussion platforms that those mysterious figures were the Poltergeists.

Remember, we have witnessed the spirit of Going Merry in the Skypiea and Enies Lobby arc. Franky told Usopp that they appear when the ships are well-loved by its crewmates. But what if the opposite is also true?

Going Merry has a Klabautermann. But if the ship is left uncared and not loved by its crewmates, a poltergeist may appear. So, in our opinion, those figures behind the dark mist were none other than the Poltergeists.

That is why many crews were eradicated in the region of Florian Triangle; whosoever not took care of their ships. This theory can be true because the series revealed the ship’s spirits just before the Thriller Bark arc.

How Thriller Bark and Brook survived in the Florian Triangle-

If we talk about the Thriller Bark, then it was theoretically not a ship. It was basically an island that was modified into a ship. So, in the eyes of the Poltergeist, it was just a moving island.

On the other hand, for Brook’s ship, those beings probably assumed that it was already a ghost ship. Therefore, they ignored him too.

The Thriller Bark took captive of Luffy and his crew along with Thousand Sunny. During the whole journey of the Florian Triangle, the crewmates and the ship were inside the Thriller Bark. That is why the Poltergeists did not show themselves.

But in the end, they appeared because Lola and others set a ship to sail on. Many fans also predicted that maybe Lola’s ship had engaged with them. But the recent panel of the One Piece manga series showed her with Bege’s crew. This describes that they somehow managed to way out from the Florian Triangle.

This concludes the theory on the mysterious figures that appeared in the Florian Triangle. Hope you enjoy it. We will back with another theory article. Till then stay tune with us and read the articles below.

Top 7 Characters who can overpower Gol D. Roger in One Piece