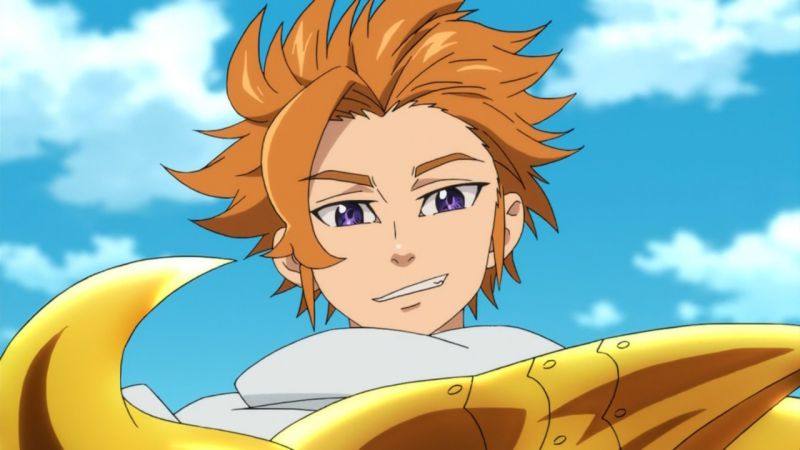 Seven Deadly Sins is one of the more popular series that has come to an end, with the manga concluding its story last year. Fans are now waiting for the anime to end, with the anime-only fans still ignorant about the twists and turns of the last arc.

This is a good opportunity to mention that this article is going to be a spoiler for anime-only fans, and this is their cue to browse another fantastic article on our website.

Arthur Pendragon from Seven Deadly Sins, popularly known as King Arthur, is the most powerful character in this series with his insane surge of power in the concluding parts of the story.

So today, we are going to break down the power level of Arthur and discuss his abilities in detail. King Arthur of Seven Deadly Sins rules over Camelot while wielding the power of the legendary sword, Excalibur.

There are very few generous men like Arthur who strictly adhered to his life’s ideals and followed them to their end.

Excalibur increased his power by many levels, but he achieved the main point in his growth by fusing with a certain entity.

Arthur’s initial power level was 40000 comprising 37600 Magic, 900 Strength and 1500 Spirit. Starting out as a simple boy Arthur was chosen by the legendary sword, Excalibur to be its wielder.

Upon encountering Merlin, Arthur started training under her learning the valuable lessons that he needed to fulfil his responsibilities as King Arthur from Seven Deadly Sins.

Arthur is a beast with his sword, and his natural talent as a swordsman made him almost unstoppable with Excalibur. He is a natural-born prodigy, as we saw how he demonstrated his skills with a sword while being blindfolded.

He had a natural affinity towards swords from the very beginning, which only increased as he grew up. He is also extremely agile, giving him a wide range of mobility to combat against his opponents. His top-notch physical prowess makes him quite hard to beat in a one-on-one battle.

The most polished and distinctive skill of Arthur from the Seven Deadly Sins is his antiques while wielding a sword. He is unparalleled and unmatched with a sword in his hand and can defeat any experienced fighter in a swordfight.

As we saw in his matchup against Hendrickson, he was able to react quickly to his attacks while simultaneously dealing powerful blows.

He far exceeds a human in terms of his swordsmanship, which is why he was the only one to pick up the legendary sword Excalibur from the ground and become the ruler of Camelot in turn. He was the chosen one to draw out the full power of the sword and do justice to its legendary status.

Thus, Arthur possesses a variety of knowledge regarding the use of his precious sword, which in addition grants him a huge surge in his speed and strength, enabling him to fight in his Assault Mode.

This is an inherent unique ability of Arthur Pendagron whereby he can resist the Ten Commandments making their attacks useless against him. We got an example of this instance when Zeldris’ Piety did not affect Arthur, and it left Zeldris baffled.

This also enabled him to launch a sneak attack on demons and crush them since they were unable to track his presence.

Arthur loves to battle against enemies using a variety of weapons, and Sequence is one of them besides Excalibur. It is a unique longsword with a magical ability to return to its original shape if it somehow got broken.

This granted a fair amount of advantage to Arthur since he could go all out without worrying about damaging his precious weapon.

Chaos is the creator of the world and all the other things that existed in it. It is the origin of all life forms on earth and is an ancient entity comprising both light and darkness.

Chaos had the power to create new worlds out of nothing, and after being reborn as the Mother of Chaos in Seven Deadly Sins, it chose Arthur as its most suitable host and be the rightful heir to the power of King of Chaos.

Seven Deadly Sins Mother of Chaos is a power that is even feared by the Supreme Deity and the Demon King. It allowed Arthur to use many abilities and the strongest of them being Creation.

Arthur can create superior beings and large worlds from absolutely nothing. At first, he himself was quite shocked at his immense power but slowly grew into it.

After fusing with Seven Deadly Sins Chaos, Arthur’s treasured possession, Excalibur evolved further and managed to attain its final form. This made Arthur even more powerful than he already was, allowing him to wield the legendary weapon in new ways.

The true powers of Chaos knew no bounds as Arthur could bend reality however he wanted. He could also distort time and space and create huge dimensions making him completely invincible. It literally made him the most powerful being in Seven Deadly Sins.

It was a monstrous entity that wanted the full power of Chaos all for himself since it considered itself the rightful heir to the title of King of Chaos. However, it had no intention of using the power justly and wanted to use it to bring about massive destruction everywhere.

Being made by Chaos, it already possessed some unique abilities of its own, like telekinesis and telepathy. However, we witnessed its main rise in power after it was able to absorb a part of Chaos by devouring Arthur’s right arm.

This allowed Cath Palug to create a new dimension that sucked everyone around it inside.

Moreover, it gained massive regeneration abilities, which made it almost impossible to defeat even after being repeatedly sliced by Excalibur. It also heightened its physical strength and endurance, making it immune to magical attacks.

Cath was the pet cat of Arthur that was found by him after completing his training in Istar. It was a part of Cath’s scheme to stick close to Arthur and bide his time till he absorbed Chaos.

Cath had then planned to devour Arthur and take the power of Chaos for itself. He also became successful in this venture by tearing off his arm and absorbing a portion of Chaos which was enough to grant him immeasurable powers.

This was the final fight in the concluding parts of the series, with Cath Palug serving as the final surprise antagonist. Cath Palug became insanely powerful even with a fraction of Chaos’ power and created a dimension absorbing everyone inside it.

Arthur initially managed to save everyone by cutting it in half with his Excalibur, but it used its regenerative power and came back.

Although Cath Palug from Nanatsu no Taizai tried to weaken Arthur mentally by informing him how the city of Camelot had been destroyed, Arthur managed to compose himself and devoured Cath by creating a dimension.

This allowed Arthur to merge back again with the remaining piece of Chaos and return to his full power marking the end of Cath Palug.