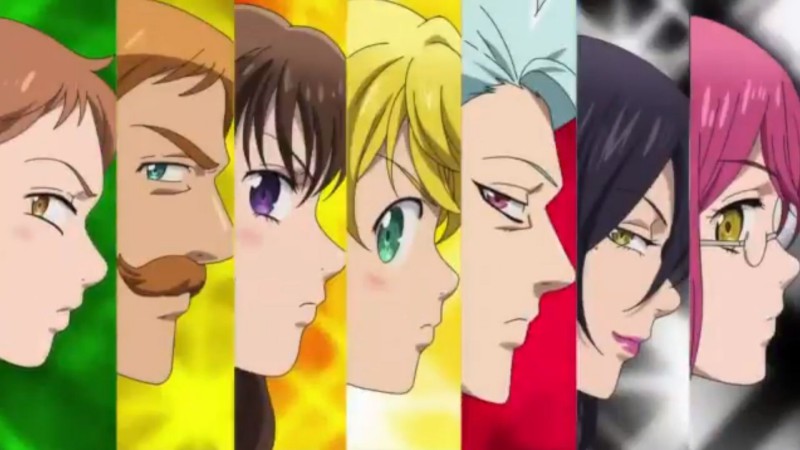 Seven Deadly Sins is a manga series written and illustrated by Nakaba Suzuki. It started serializing in Kodansha’s Weekly Shonen Magazine in October 2012. The series sold over 30 million copies worldwide and also won the 39th Kodansha Manga Award in 2015.

The Seven Deadly Sins comprises seven brutal criminals in the land of Britannia. They were the strongest and cruelest order of the Holy Knights. They were framed for plotting a coup of the Liones Kingdom and had been disbanded indefinitely. They are the main protagonists of this series.

Gowther is a doll created by a great wizard. As a result, Gowther doesn’t age and can practically live on forever. He doesn’t feel physical pain and he can be fixed even after some devastating attacks. Thus, he is super resilient. He also possesses a great amount of magic power. While fighting Dawn Roar in Ordan, he caught Weinheidt’s charged arrow with his bare hands and sliced through the Armor Giant easily. However, his body is not completely immune to damage as he saw in his fight with Mael. As a result, Gowther takes the seventh position in this ranking.
Power level= Magic + Strength + Spirit = 1300+500+1300 = 3100
However, after regaining his emotions and memories his power level increased to 35,400.

Diane is the strongest member of the Giant Clan and much larger than her fellow Deadly Sins members. We get to see Diane’s incredible strength when she punched the ground and used it to stop a horde of bugs from destroying a town. She has great durability as we saw how she was able to resist Gilthunder’s lightning and break free from it. She also has incredible speed and combined with her physical strength was able to beat more than ten men with ease in the fighting festival’s preliminaries. She even succeeded in using her powers to separate Demon King Zeldris from the lake which was supplying him with important magical powers. She shone in one-on-one combat in a way that Gowther didn’t. This is why she takes the sixth position above Gowther in this rankings.
Power level(initial)= Magic + Strength + Spirit = 900+1870+480 = 3250
However, after performing Drole’s Dance her power level rose to 50,000 in her giant form.

Merlin is the greatest mage in the land of Brittania. Although her power level is less than that of Gowther, it doesn’t reflect what she is capable of. She created the bomb inside Gowther and she could create more like it and use them as she wanted to. She also could teleport and we can speculate that she could ignite the bomb and teleport far away without taking any damage. In the initial part of the story, we saw how she easily defeated some of the best Holy Knights in Liones. She displays her power once again in the battle against Chandler and Cusack. She used the perfect combination of strategy and spells to overpower them. She is most useful in team battles where she can use magic to amplify the power of her allies. Thus, we can see that she is no slouch in one-on-one and two-on-one situations and secures a fifth place in the rankings.
Power Level= Magic + Strength + Spirit= 3540+70+1100= 4710

King is the protector of the Fairy King’s Forest and the Fairy Realm. He is the most powerful Fairy King in all of history. He has several special abilities including the ability to fly, change his appearance, and great speed. Despite having great power he is physically weak. He compensates for it with his Sacred Treasure and his immense level of magic power. His power increased greatly when his wings finally grew. After that, he was able to access the true power of the Sacred Tree and his Sacred Treasure. This allowed him to overpower Mael and use multiple forms of his Sacred Treasure simultaneously. He is also extremely fast as we saw how he dodged the attacks of both Gulia and Jericho. This places King in fourth place in the rankings.
Power Level= Magic + Strength + Spirit= 38800+0+2800=41600

Ban initially lagged behind his fellow Deadly Sin members in terms of power. Although he had the best ability of immortality, he was weak physically. However, after spending time in the Purgatory his endurance and durability greatly increased. While tolerating the harsh conditions of Purgatory he improved his physique. Even after losing his immortality Ban could withstand similar conditions like he saw when he came out of the Demon King’s energy storm unharmed. His strength and speed also rose to a great extent while fighting the Demon King in Purgatory. Ban’s best ability is Snatch which allows him to steal physical objects from his enemies. As a result of how Ban rose in level during the years, he takes third place in the rankings.
Power Level(before Purgatory)= Magic + Strength + Spirit= 1380+930+910=3220
After the Purgatory, Ban’s power level rose to 500,000.

Escanor was known throughout the Kingdom of Liones as “The Strongest Holy Knight”. His Sacred Treasure, Rhitta, and his Inherent Power, Sunshine made him gain immense power during the day. Escanor was able to defeat Meliodas in his assault mode, using “The One”. However, before reaching “The One’, Escanor could barely match up against Meliodas. At night Escanor becomes powerless and is unable to use his magic. He heavily relies on his Sunshine during battles. His incredible strength increases with his magical power as we saw he cleaved Galand in two with a single swing of his Sacred Treasure. Escanor thus takes second place in this list barely missing out on the first position.
Power Level= 798,000 ( with The One Ultimate)

Meliodas is the captain of the Seven Deadly Sins. He is the older brother of Zeldris and the eldest son of the Demon King. Meliodas can use and morph the power of darkness into various shapes for different purposes. He is very skillful with his sword and has incredible magical abilities. He is also virtually immune to magic abilities with his special ability, Full Counter. Meliodas became the Demon King after absorbing all of the Commandments. It increased his power level to the same as his father possesses. This puts Meliodas first in our rankings due to the insane power levels he reached and the potential that he had.
Power Level(Initial) = Magic + Strength + Spirit= 400+960+2010= 3370
Meliodas in his true magic form was able to reach a power level of 1000000.

Elizabeth is the daughter of the Supreme Deity and one of the highest-ranked members of the Goddess Clan. She was cursed by the Demon King since she fell in love with Meliodas and helped the Demon Clan in the Holy War. She is an extremely powerful Goddess as she proved her strength by taking on two members of the Ten Commandments herself. Her power was also recognized by Mael who thought she was as capable as Meliodas or Ludociel in terms of power.

This concludes the ranking of the most powerful members of the Seven Deadly Sins. It is worthwhile to notice that the ranking was not based merely on power levels. The potential of each member and their ability to execute their strategies in battle was also taken is account. This is why Merlin is placed above Gowther and Diane, due to her skills on the battlefield.