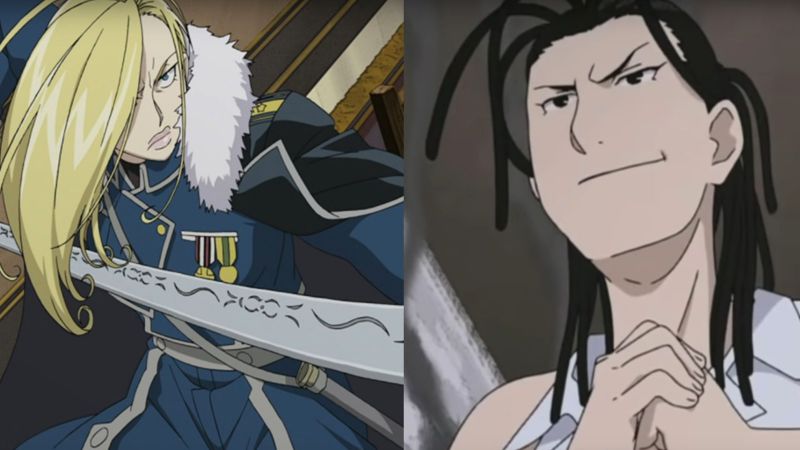 Mrs. Bradley is the wife of King Bradley and, without a doubt, one of the hottest Fullmetal Alchemist female characters. She is too kind and innocent for her own good, which was exploited by King Bradley and her son.

Being the First Lady, she dresses very maturely in a crimson coat and a pink shirt. She is also shown to be quite romantic as she recollects the past days of her romance with King Bradley.

Like her friend Riza, Rebecca is also a gorgeous girl. She has a mature look about her, and marksmanship skills were one to match. Her long brown hair stands apart the most about her as she likes to dress in casual clothes.

Although she is very dedicated to performing her duty, she is rarely seen to be wearing the traditional uniform clothes.

Sarah Rockbell was one of the most selfless Fullmetal Alchemist girls. She was a doctor by profession and continued to spend the last moments of her life while tending to the injured even though she knew her life was in grave danger.

She had crystal blue eyes on her pretty face with blonde hair on her head. She was known to be a dutiful and tenacious woman with a heart of gold.

Catherine is a fma female character belonging to the prestigious Armstrong family. She is a pretty girl and, like the other Armstrongs, has great physical strength.

She is also quite girly in contrast to her other family members and is known to be extremely shy in front of others. Being brought up in the Armstrong family, she prefers strong muscular men like her brother.

We first met Mei when she was a little kid. However, since then she has grown into a beautiful adult and has married Alphonse Elric. She is a princess and unlike normal princesses, she is a martial arts expert and one of the best in her country.

She is a cute girl with dark eyes and pale skin. She has the qualities of a perfect woman and the fact she came all alone to a foreign country to help her clan shows her strong-willed character. Moreover, she likes to daydream quite often, a trait that is very sweet and is also very romantic.

The 10th hottest Fullmetal Alchemist female character is the mother of our protagonist. She was a beautiful woman who had married Van Hohenheim. She always had a soft expression on her face and has very understanding.

She kept her brown hair tied in a ponytail and left it hanging at the sides. She was also a very kind woman with a beautiful smile on her face which places her so high up on the list.

Sheska is a cute nerdy girl who used to work in the Military Library of Amestris. She excels both in beauty and intelligence as she has a brilliant photogenic memory. She can store any information in her brain exactly as she reads them in the books.

However, her self confidence is on the lower side and she easily gets affected by other people’s opinions. She is a helpful girl and has an overall wholesome personality which makes her one of the hottest fma girls.

Maria Ross works as a soldier under Major Armstrong in this series and one of the prettiest fma female characters. She is adept at keeping her balance between work and life as she navigates through her daily routine with a big smile on her face.

She has very short length hair with a mole under her left eye. Apart from that she has fair skin and is usually seen wearing her military uniform.

Rose was one of the first fma girls to be introduced in the series. Although she only appears for a short time her innocence and charm were enough to make her a fan favourite.

She is a cute girl with brown hair and purple eyes. Her hopeful nature is quite infectious and she always tends to greet everyone with a bright smile.

Izumi Curtis is the teacher of Alphonse and Edward and is the perfect example of beauty with brawn. She is extremely skilled in both martial arts and alchemy and is feared by both the Elric brothers.

She has a curvy figure with fair skin and tall height. Her affection for both her students is also very adorable and her scary nature is one of the most attractive things about her. In this way, she proves herself as one of the hottest Fullmetal Alchemist girls.

Lan Fan is an exotic foreigner in this series. Like Izumi Curtis she also excels in both her beauty and fighting skills. She is extremely selfless and always thinks about the welfare of Ling Yao without any concern for her own safety. She has a cute face with her black hair tied in a bun.

Her body is covered by various sets of armour and hidden weapons that greatly helps her in any sort of combat. Her major attractive feature is her lean and curvy figure making her the 4th hottest fma female character.

It is quite an irony that such a hot character like Olivier Armstrong lives in the cold north at Fort Briggs. Like her sister Catherine, she comes from the Armstrong family and is naturally a beautiful woman with great physical strength. She is very commanding in nature and is unwavering in her leadership.

She has all the grit and willpower required to manage Fort Briggs in such heavy snow. She has long blonde hair with soft prominent lips. Her eyebrows are always curved showing that she is annoyed at something or the other.

The competition for the hottest girl in Fullmetal Alchemist was definitely going to be tough and Riza misses the first spot just by some distance. Riza is one of those fma girls with a huge following and rightly so. Not only is she a beautiful woman, but she is also an excellent sniper.

She also manages to come out of Mustang’s shadow and establish herself as a prominent character in the series. Moreover, her equation with Mustang is adorable and fans love it.

Winry is not only the best girl in Fullmetal Alchemist but also the hottest. She is quite girly with a slender attractive figure. She keeps her long blonde hair untied and wears a green bandana over her head.

She is a very kind and cheerful girl who cares a lot about others. Her tensed romantic moments with Edward is also cute and wholesome to watch.

This intriguing list of the top 14 hottest Fullmetal Alchemist girls finally comes to an end. The top two spots are definitely debatable with both Riza and Winry deserving the first spot.

However, the majority of the fans believe Winry to be the hottest Fullmetal Alchemist girl. We will be back again with another top 14 article. Stay hyped with us until then.