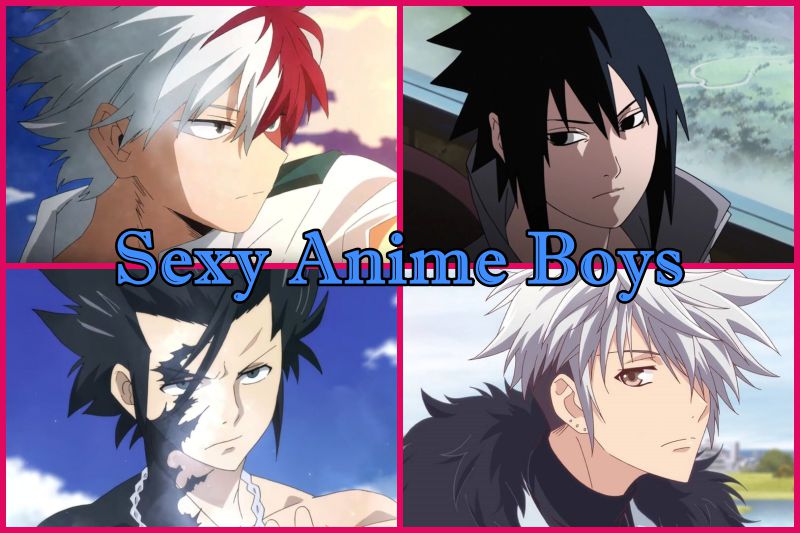 In the world of anime, there’s no shortage of sexy anime boys. Most anime protagonists are teenagers with some cool features. Then comes the rival character, who is somehow even hotter than the protagonist. There are also the villains sometimes, who manage to catch our eyes more than the heroes. Today, we’ve taken the impossible task of making a list of 15+ sexy anime boys.

For this list, we’re only taking male characters who are very good-looking and under the age of 21. We’re also taking one character from each anime for the sake of variety. So, without further ado, let’s begin.

The first entry on our list of sexy anime boys is Sasuke Uchiha. Sasuke is the deuteragonist of the Naruto series and a shinobi of Konoha. He is a member of Team 7 and the legendary Uchiha clan. Sasuke’s goal in life is to kill his brother, Itachi, to avenge his clan.

Sasuke is very good-looking, as many characters pointed out in the story. He always has women attracted to him. In his childhood and early teen, he had loads of fangirls fawning over him. Even older, mature women like Mei Terumi can’t help but admire his looks.

Shoto Todoroki is a student of Class 1-A of Hero Class in U.A. High. He has a powerful Quirk named Half-Hot Half-Cold, by which he can use ice powers through his right side and fire powers through his left. He is also the son of Endeavor, the No. 2 Pro Hero.

Todoroki’s looks have also been pointed out by characters in the story. His bicolored hair and heterochromia give him a distinct look about him that is very attractive. The scar over his left eye doesn’t diminish his appeal, only enhances it more.

Tooru Oikawa is a third-year student at Aoba Johsai High School or Seijoh. He is the ace setter and captain of the boys’ volleyball team. Oikawa was an upperclassman of Kageyama during junior high, where he was envious of the younger boy’s skills.

Oikawa is very handsome and has a group of fangirls of his own who come to cheer for him in his matches. He has a sweet, pretty boy image among girls with his attractive features and tall height. But even with all that, the poor guy can’t keep a girlfriend for long.

Eren Yeager is a member of the Survey Corps after graduating from the 104 Training Corps. After losing his mother to a Titan and getting his hometown destroyed, Eren is full of hatred for the Titans. His life turns upside down when he finds he’s a Titan himself.

As a teenager, Eren has a certain wild charm about him. His intense, vibrant green eyes and that resolved glint in him make it impossible not to notice him. But as he grows older, the darkness in him increases, and so does his hotness level.

Anime: Yona of the Dawn

Son Hak was the bodyguard of Yona, the princess of the Kouka Kingdom. He is also the childhood friend of Yona, whom he’s loved since childhood, and Soo-Won, the man Yona loved and planned to marry. After Soo-Won’s betrayal, Hak rescues the princess and accompanies her on her journey to reclaim her kingdom.

Hak has a strong and firm build that is perfect for his role as a bodyguard. But his body isn’t the only thing attractive about him. With his gorgeous black hair falling over the vibrant blue eyes, it’s a wonder how Yona hasn’t noticed this hunk for so long.

Hatsuharu Sohma belongs to the influential Sohma family and is the ox of the 13 Chinese Zodiacs of the Sohmas. He is a first-year student at Kaibara High School along with his fellow Zodiac, Momiji. Hatsuharu is secretly dating another Zodiac, Rin.

Hatsuharu’s dashing looks are in complete contrast to his aloof and air-headed personality. The spirit of the cow has influenced his hair to become white with a black undercut. Hatsuharu also likes to wear stylish clothes and accessories, making him all the more attractive.

Takumi Usui is a student at Seika High School, where the girls fall for him on a regular basis. He, however, turns down every confession coldly, making the girls cry. His life takes an interesting turn after learning the secret of the student council president, Misaki.

Usui is a ridiculously handsome guy. His height, naturally blond hair, and gorgeous features have girls tripping over themselves for his attention. Usui’s undeniable good looks make him one of the sexy anime boys who blow our minds.

Haruka Nanase is a teenager who loves water. Haruka, or Haru, as he’s known by his close friends, is a high school student and a member of its revived swim team. Haru prefers to swim freestyle, and his swimming is absolutely a sight to behold, as many characters noticed.

Like his graceful swimming, Haru has a calm beauty in his looks. His black hair and bright blue eyes are striking, and so are his fine features.

Anime: Seraph of the End

Mikaela Hyakuya, or Mika, is a vampire who was once the best friend of Yuichiro during their time in the orphanage. When vampires took control of the orphanage, Mika planned an escape with his fellow orphans. But his plan failed, resulting in him becoming a vampire and the death of others.

With messy but fluffy-looking blond hair and blue eyes, Mika has beautiful and graceful features. If there’s a vampire this attractive, how can anyone not let their blood be drained?

Killua Zoldyck is the third son of the infamous Zoldyck family. Hailing from an assassin family, he has been subjected to brutal training and cruel torture that ruined his childhood. He is currently a Hunter, traveling with his best friend, Gon.

Killua, despite being a boy of 12, is already very good-looking. His messy, silver hair and mischievous smile are enough to impress anyone. But together with his stylish and frequently changed clothes, Killua is a sure choice for our list of sexy anime boys.

Rin Okumura was an unassuming teenager living with his fraternal twin, Yukio, and adoptive father. But one fateful day, his adoptive father is killed in front of him, and he learns of his and his brother’s true identities as the sons of Satan. Now Rin studies in True Cross Academy to defeat Satan.

Like some of the other characters on this list, Rin has the classically attractive jet-black hair and blue eyes combination. But the most eye-catching feature of his is his pointed fangs. It makes him look both boyish and roguish.

A member of the famous Fairy Tail guild, Gray Fullbuster is a Mage who uses creation magic. His particular magic is Ice-Make, by which he can make anything out of ice. Gray usually goes on quests with Team Natsu and is a rival of Natsu.

Gray is a guy not ashamed of his appearance, and for a good reason. His stylish black hair and dashing smile took the heart of poor Juvia. His looks, paired with his habit of ridding himself of his clothes, are some of the things that make Gray so hot. Or cold, in his case.

Ryota Kise is a first-year student and the small forward on the basketball team of Kaijo High. He was one of the Generations of Miracles at Teiko and Kuroko’s former teammate. Kise’s special ability is copying techniques.

With his huge girl-fanbase, it’s undeniable that Kise is very handsome. His straight blond hair, golden eyes, and roguish smile easily pierce the hearts of girls. His tall height and ear piercing don’t hurt his image either.

Megumi Fushiguro is a jujutsu sorcerer and a first-year student at the Tokyo branch of Jujutsu High. He belongs to the famous Zenin family. Fushiguro uses the versatile Ten Shadows Techniques for his jujutsu technique.

Fushiguro resembles his late mother very closely. He has her wildly messy, black hair that really looks ridiculous, but with his fine features, he somehow makes it work. His eyes are a vibrant green in the manga, but in anime, it’s blue. We have to say, both work for him very nicely.

Tamaki Suoh is a second-year student at Ouran High and president of its Host Club. He’s the heir of the rich Suoh family and the illegitimate son of its head. After coming to Ouran High from France, Tamaki decides to open the host club with Kyoya.

With his luscious blonde hair and purple eyes, Tamaki looks like a prince from a fairy tale. Even his mannerisms are charming and prince-like, making the girls visiting the host club blush at his every word. The only girl he hasn’t managed to charm at first glance is Haruhi.

Last but not least, we have Yukihira Souma as our last entry on the sexy anime boys list. Soma is one of the 92nd Totsuki Generation at Totsuki Culinary Academy. Souma is a brilliant, aspiring chef and the son of restaurant owners who taught him to love food since childhood.

Souma is a dashing young man with red hair and golden eyes. He has a distinct scar over his left eyebrow that gives him an edge. Souma’s cooking is not the only impressive thing about him. His white apron and forehead band fall in that category too.

Attractiveness and sexiness can be subjective. But these sixteen characters really know how to catch someone’s attention. There’re also plenty of other sexy anime boys we couldn’t include in the list, but we all know who they are, right? Stick with us for fun lists like this one. You can also go and give our other similar lists a go.