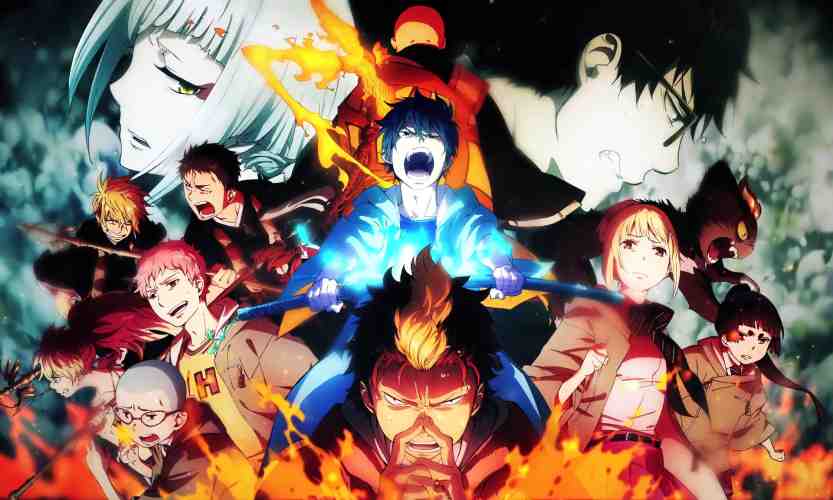 How would it feel to always be in the shadow of an all-powerful entity, especially if that entity happens to be the devil himself?

Welcome to the life of Rin Okumura, the devil kid whose powers are sealed up in a katana and whose primary ambition in life is to defeat Satan, who incidentally also happens to be his father.

Blue Exorcist doesn’t lack in terms of powerful characters, and the supernatural elements keep the fans hooked. In this list today, therefore, we’ll discuss the top 15 strongest characters in Blue Exorcist and what keeps separates them from the bunch.

Must Read- Where to Watch Blue Exorcist? Watch Order Guide

Miwa is an Exwire and a student of the True Cross Academy, where they teach students to fight demons (how cool is that!). He is the only surviving member of the Miwa family and is immensely protective of his friends.

Miwa holds a bitter grudge against Satan for eliminating his family during Blue Night. He is an ex-student of Tatsuma Suguro and is training to become an Aria with his sizable knowledge of scriptures and Fatal Verses.

Shiemi is soft-spoken and incredibly friendly and is practicing in the True Cross Academy to become a Tamer. Initially quite withdrawn to herself, Shiemi made quite a few friends at school owing to her exceptional kind-hearted nature, which made her immensely popular with the other Exwires.

She is accompanied by a Greenman spirit whom she named “Nee,” She also runs the medicinal garden that doubles up and the ammunition stronghold for the True Cross Academy with her mother.

Kamiki is the typical smug top student in the exorcism class at true Cross Academy. In her banter, she is just the opposite of Shiemi, extremely cold, pointed, and ruthless. She even tried to take advantage of Shiemi by treating her like an attendant after she joined the school.

Despite her hard exterior, however, she has a soft personality within and was one of the first persons to accept Rin Okumura after coming to know that he was the son of Satan. Born an Inari, she is able to summon the high-ranking Byakko demon and is also studying to become a tamer.

Ryuji is a prodigy regarding exorcism and is the only son of Tatsuma Suguro. His temple was burnt down during the Blue Night, which made him swear vengeance against Satan. He is extremely hardworking and entered the True Cross Academy under the same scholarship as Yukio Okumura.

He is a top student and can accomplish anything he sets his heart into, which sparks in him a competitive streak with Rin Okumura. He is obnoxious and ill-tempered, however extremely talented, and can recite 21 verses from the Bible.

Also known as the “Priest of the Cursed Temple,” Tatsuma Suguro is one of the few survivors of Blue Night. He does not seem to take life seriously and almost always is found in an inebriated state. However, do not fall for his smiling face; he can become a force to be reckoned with if he decides to get serious.

This is seen in his final moments in the battle against the Impure King. He also gave the katana to Shiro Fujimoto in the first place, which has Rin Okumura’s powers locked within. As the father of Ryuji, he does not wish to involve his son in temple matters and wishes for him to choose his own path.

Who would have thought that a familiar would be ranked so high on the list? Kuro is a two-tailed black cat who used to be Shiro Fujimoto’s familiar before his death and is now Rin Okumura’s familiar.

He loved Fujimoto which is why overhearing about Fujimoto’s death sparked anger within him. Kuro can grow into a necomata or a giant demon cat and also has the ability to communicate with other demon spirits.

Yukio Okumura is the fraternal younger brother of Rin Okumura. Unlike his elder brother, he is a full-fledged exorcist, the youngest to become and hold Meister’s tiles in Doctor Dragoon. He also ends up as a teacher in true Cross Academy. Yukio usually used a gun with holy bullets as his weapons, and he trained extensively under Father Fujimoto to protect his family.

He is willing to go to any extent in order to protect Rin, and although he nursed secret jealousy at Rin’s receiving preferential treatment, he gives his all to protect the only family that he has.

He is the brother of Yukio from the fraternal side and is also the son of Satan. Currently studying as an Exwire at the True Cross Academy, Rin holds the ambition to become a Knight Meister and defeat Satan. Rin uses a Kurikara within which sealed Rin’s demon heart until the blade finally broke and returned Rin’s demon heart to him.

. Rin is under training to control his blue flames, which have immense destructive abilities. Being the son of Satan, he has certain demonic qualities such as accelerated healing and enhanced strength, and he uses all of that to protect his friends in battle.

Shura is an upper-class Knight Meister who trained under Shiro Fujimoto and is the current mentor of Rin Okumura. She had initially infiltrated the academy under the name Yamada; however, after the amusement park fiasco, she joined as a teacher for the Exwires. She has a marking on her chest from which she brings out her deadly sword Fang and is immensely loyal to Shiro Fujimoto.

Lewin is the second in command after Arthur A. Angel. He is an Arc Knight for the True Cross Order and one of the strongest exorcists present. He is one of the very few who has mastered all five branches of exorcism: Tamer, Aria, Knight, Doctor, and Dragoon, which makes him a formidable force to be reckoned with.

However, he is extremely messy and often makes Rin clean up after his battles. He has acknowledged it himself that he lacks empathy and has been so ever since his birth. However, Lewin does have his own moral code and despises people who go back on their word.

Arthur A. Angel is the strongest warrior of the True Cross Order and their Paladin, which is the highest-ranking exorcist within the Order. Like Lewin, he is a master of all five forms of exorcism, however, prefers to use a huge sword called Caliburn during combat.

He is extremely disciplined to the orders of the Grigori and will follow those, even if it goes against his own moral judgment. However, beneath his façade lies a darker, sadistic personality where he mocks Rin at every opportunity he gets.

The seventh strongest of the eight demon kings is none other than Amaimon, and he is called the “King of Earth.” When he’s on earth, he takes over the body of a teenage boy named Ambrosius Faust and is the intent of having ‘fun.’

Amaimon appears to be extremely calm; however, he flies into a fit of rage if anyone interrupts his idea of Fun. He is extremely brash and over-confident of his powers and, later in the anime, is sent back to Genenna to live with his father.

Mephisto Pheles is one of the strongest demon kings, second only to Satan. While on earth, he uses the identity of Johann Faust V and is the director of True Cross Academy. He made the Katana that has Rin’s powers locked.

Mephisto is known as the King of Time and is always ahead of the game. Although his loyalties aren’t exactly clear, since he is known as a ‘hell-raiser’ and likes a bit of chaos, he is one character that the True Cross order cannot afford to part with.

Shiro Fujimoto was one of the strongest characters in the Blue exorcist world- the two-hundred fifty-first Paladin as well as the adoptive father of Rin and Yukio. Although his initial appearance comes off as a peaceful priest, do not be taken by his external appearance, this old man can whip out a pair of flintlocks and destroy demons left, right, and center.

He was able to resist Satan even after his possession which is really a testimony of his strength, and as a war veteran, he realizes the value of peace but also secretly prepares his younger son Yukio for becoming an exorcist.

The misunderstood king of demons is also the father of the eight demon kings and the strongest devil. Satan is initially projected as a sadistic devil who is intent on opening the gates to Gehenna for his own selfish reasons.

However, later in the series, it is revealed that this misunderstood devil was in fact in love with Yuri Egin, and her death was one of the primary motivating factors for Satan’s revenge. He is one of the few beings in existence that has the power to open the Gehenna Gate and can definitely be considered the strongest character in Blue Exorcist.

With a horst of powerful characters, Blue Exorcist is one of the most intense anime series out there and is available for streaming on Netflix. So, what are you waiting for? Join Rin and his friends as they try to take down the king of the devils.