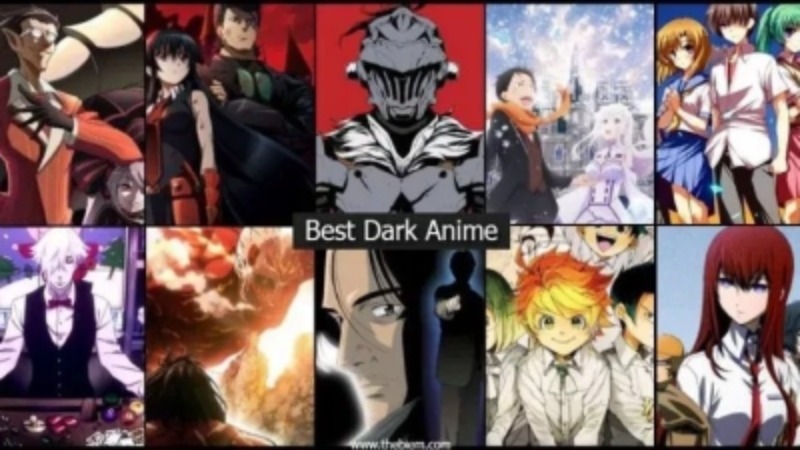 Room lights dimmed, devoid of worldly thoughts, and completely engrossed in an intense dark anime. Sounds thrilling, right? So was felt by thousands of people who fell in love with dark anime and whose numbers are rapidly growing day by day.

Among various popular websites, Netflix has emerged to quench our thirst for anime successfully. And when it comes to the dark genre, Netflix serves a challenging role in bringing these popular anime to us. Apart from various collections of movies and popular TV shows, Netflix does not compromise with its anime library.

Anime under the dark genre, be it from dark romantic to dark comedy, has achieved a considerable fan base among the Gen-Zs. In this article, I bring to you the top 15 dark anime which are available on Netflix, with a suspense plot.

One of many arcs of the main anime Tokyo Ghoul, it follows the events after the Anteiku raid by the CCG. This arc introduces the Quinx squad, who uses quinques to eliminate the unwanted residents of the city. Ken Kaniki undergoes a memory reset and goes by the name of Haise Sasaki of the Quinx squad eliminating ghouls.

The constant clash between his previous inner self and his new self exposes several dark aspects of one’s life. One of the best anime series ever made, Tokyo Ghoul won’t leave you without a smile of satisfaction on your face.

One of the most violent anime out there, Berserk, is the story of Guts, who gets branded for death and gets hunted by various demons throughout his life. However, he does not intend to succumb easily and embarks on his journey to fight his way out and execute the person responsible for such fate.

The plot undergoes some gruesome arcs, which are pretty dark in themselves. However, this anime won’t fall back to amuse you. Grab this anime right there on Netflix.

On a school trip to an amusement park, a tragic, rather strange incident befalls Ganta and his classmates, where everyone except Ganta gets killed. Framed for murder, he receives a death sentence and is sent to the jail he was supposed to visit.

His life in Deadman Wonderland, the amusement park which uses convicts to amuse the audiences, isn’t easy. He has to constantly struggle to live his way among sadistic inmates, mysterious powers, and a lethal collar that’s placed around his neck.

Deadman Wonderland brings us the sadistic side of convicts, making us wonder whether they require punishment or counseling. The darkness in the story prevails throughout and kind of leaves the viewer on edge at the end.

The plot centers on the idea of unrequited love. Although Hanabi and Narumi may seem a perfect couple, they have a dark secret. They are both in love with people with whom they cannot be together. However, they stay together for physical intimacy and also to ward off their respective loneliness.

Based on a pretty melancholic foundation, Scum’s Wish is undoubtedly not one of the successful love stories out there, but one’s undoubtedly going to enjoy it to its core.

The story revolves around Yuki, who one day gains the ability to read the future through a personal diary which he receives and considers quite a superpower. However, his happiness does not last long as he soon discovers that 11 other people have the same diary as him, and they must kill everyone to become the God of time and space.

Amidst these, he meets Yuno Gassai, a possessor of a similar diary and an insane psychopathic stalker, and goes to the same school as Yuki. He teams up with Yuno and embarks on his new voyage to be the Time and Space God.

Mirai Nikki is a brilliant mixture of psychological thriller, romance, and action. It shows us how someone’s goodwill can be a boon to the world and also how some people can go insane over their past traumas and perform terrible things. Overall, Mirai Nikki should definitely be up on your list if you are searching for some dark setting anime.

The town of Yomiyama gets shrouded by a gloomy, fearful atmosphere following the death of a middle school girl, Misaki. After a span of 15 years, Kouichi Sakibara receives a transfer in the same school and class and finds himself drawn to a girl, Mei Misaki. Despite being warned by his classmates and Mei herself, he follows his path, and in the process, he unravels several dark secrets of Yomiyama and its series of dark, tragic events.

One of the best horror anime, Another is also infused with several doses of suspense, gruesome deaths, and unsolved mysteries. The dark theme prevails throughout, and that’s what makes it unique.

Probably one of the best Ecchi series to be ever created, Prison School narrates the story of 5 pervert students who get prisoned in the middle of the school campus. They are kept under the observation of the infamous Underground Student Council, which further adds up to their perverted nature.

One of the hilarious comedy anime to be ever produced, Prison School also brushes some dark topics as well, masked under humor. This series will surely leave you with an aching stomach due to laughter and mind-boggling around several social issues.

The plot revolves around Akira Fudou, who has a bleeding heart. He gets pulled into the world of devils by his friend Ryou Asuka. When he sees the horrific side of this world, where demons possess humans and create havoc, Akira resorts to becoming the host of Amon. This grants him the power to fight off demons, and he embarks on his new journey to bring calamity to those who harm humans and their loved ones.

Quite an action-packed anime, it shows the dual nature of a person who is quite empathetic to others but might be ferocious at times. A show worthy of spending a weekend evening on.

In a post-apocalyptic world, when humanity has been pushed into restricted domes, robots called AutoReivs are used to help humans in daily chores. However, a new disease starts spreading among these, due to which Re-I Mayer gets appointed to investigate.

She, along with her comrades, discover some dark, baffling secrets about humanity and also discovers the true purpose of “Proxies.” Laid on quite a dark and complex plot, Ergo Proxy is undoubtedly going to give you the thrill chills you expect from such anime.

Set in the future, where advanced technology can identify a person’s criminal intent through their mental state, the justice system underwent a drastic change. Inspectors and Enforcers are the ones who hold up the justice system. However, the petals start unfolding when Akane Tsunemori steps into this world and discovers the dark, corrupt nature of this system.

Psycho-Pass bears much close resemblance to the present-day society where the termites of corruption have crept into the state’s justice system. With enough bloody, violent, and heart-wrenching scenes, Psycho-Pass becomes a formidable dark anime to watch.

Shinichi Izumi falls prey to an alien parasite alongside numerous others. But there is a sheer distinction between him and the rest. His parasite Migi unlike the others, resides in his hand and has failed to conquer his brain.

Migi, unlike the others, could not control Shinichi and thereby gets caught up in an unnatural coexistence and fights their rivals who consider them as a threat. Quite suspenseful and emotional at times, this anime on Netflix will surely provide you with the action you are seeking.

The Grace Field House is a peaceful orphanage, surrounded by forests, where the orphans live happily as a family with their “mama.” Everything seemed fine when one fine day, one of the orphans gets adopted, never to be heard again. Following this event, the three oldest siblings grow suspicious and embark on their new journey only to discover the dark side of the orphanage and of their mama, Isabella.

The story follows an immortal being, called Fushi, as a probe from a distant planet. It’s an eternal being but can take the shape of any creature it meets on the way. He befriends a young boy, who, with his help, sets on to explore the world. Despite being immortal, Fushi has specific fears. He fears losing the memories of the ones he meets.

To your eternity was one of the few anime that made me reach out for my tissue box and nearly empty it. It marvelously brings out the pain of losing a loved one and how a completely emotionless being started developing human emotions. The series makes our minds peek through the doors of our memories of those who are no longer with us. So, make sure you keep your tissue box handy before you start watching this show.

Notably, one of the best anime ever produced, Death Note, has managed to be on top of every list in almost all the genres, be it a thriller, psychological, shounen, or many more. It leaves the viewers with a highly debatable theme based on morals and justice. It exposes various aspects of one’s consciousness that bears an unmistakable resemblance to many present social issues that leave the viewers on edge, questioning their validity.

The story revolves around Light Yagami, the main protagonist of the anime. He one day stumbles on a book, which was intentionally dropped by Ryuk, a shinigami. The book, named Death Note, possesses the capability to kill an individual upon writing their names on it. Light uses this to eradicate all the criminals to establish a clean, crime-free society.

The police, however identify this as an act of a serial killer and appoint the best detective, L. The twists and turns that the plot has undergone are sure to leave you satisfied to the core.

Set amidst the Britannia Empire plunging its claws on Japan, Code Geass emerges as the top dark anime available on Netflix. Every story arc contains enough thrill and suspense to keep you on your toes. The story has such abrupt bends that it becomes almost impossible to predict the upcoming events.

When Britannia attacks Japan and renames it Area 11, Lelouche Lamperouge finds himself caught up between the Britannian reign and the rebel forces.

He narrowly escapes and meets a strange girl CC, who grants him the Geass, that can make anyone blindly obey him. He uses this power to set his voyage against a rebellion against Britannia under the name Zero.

It’s almost impossible to sum this series up, as it takes several severe bends. Therefore all you need to do is start binge-watching this nail-biting suspense anime.

Dark genre anime may not always be an easygoing task. Some scenes might make us uncomfortable, but that’s where the beauty of it lies. Despite being such, the suspense makes us plod along with the story. If in case the above-mentioned anime has not been made available in your country, you can always use a VPN and set its location according to the anime’s availability.