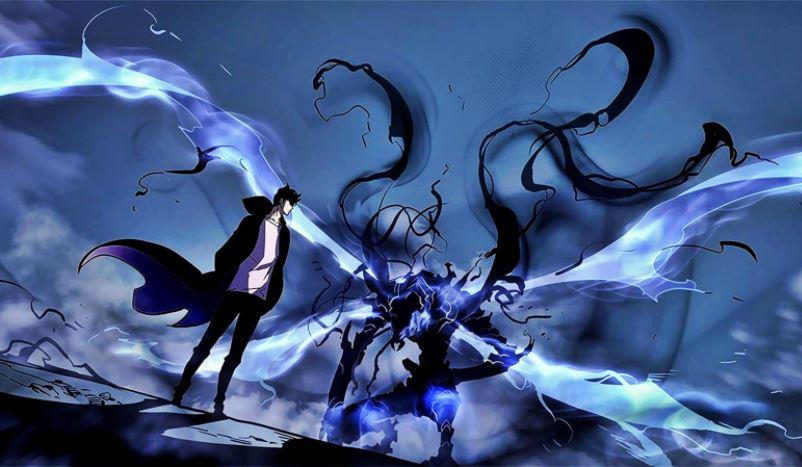 Solo Leveling is a webtoon series adapted from the web novel “I Only Level Up,” written by Chu-Gong. It was later published by D&C Media and Kakao as a series in the year 2018. The artist Gi So-Ryeong and Jang Su-Rak have since then kept up the image and hype of the web novel and have continued to garner interest in it.

The action, adventure, fantasy series starts off in Korea and revolves around a world that has a portal opened to another world, habited by monsters. Due to the portal, mere mortals are now able to acquire magical powers. These powers help them become hunters, whose main job is to hunt the monsters. The portal also grants humans access to dungeons and gates.

Our protagonist, Sung Jin-Woo, starts as a weak E-rank hunter who ends up getting trapped in a rare, dangerous double dungeon and “dies.” After a huge turn of events, he wakes up in a hospital and is now made aware of a System after his reawakening. The System declares him to be a player and so provides him with quests to level up and become the strongest hunter. And so, we now get into ranking the Top Strongest Korean Hunters in Solo Leveling.

We were introduced to this extremely strong S-rank healer in chapter 109 of the web novel in the Jeju Island Raid arc. His immense mana reserve and impressive healing magic are what sets him apart from others. And the contributions of his skills, such as Camouflage, Antidote, and Buff magic, saved numerous lives. His existence in the Jeju arc itself showed his immense courage. However, his only weakness was the lack of combat ability possessed by everyone else.

We met the guild master of the Fiend Guild in chapter 112 of the web novel and were exposed to his long-ranged skill, magic arrow, in the Jeju arc. He was previously the leader of South Korea’s strongest guild and had the experience to match the title. Tae-Gyu is armed with a Bow, but even without it, he manages to deliver the same destructive power of his arrows. Although blessed with quick reflexes, his weakness of lacking hand-to-hand combat skill is what lands him in trouble.

The Jeju arc also introduced us to the guild master of the Fame Guild in chapter 90. His tough body and insistence on using brute force reinforce his ability as a tanker, but his martial art skills proved that he wasn’t a simple-minded hardhead.

His skill of gigantification and use of armor, shield, and spear, including his ability to hold his own, presented him as reliable. However, his inability to keep up with continuous high-powered attacks is what leaves him behind.

We met this minor antagonist in chapter 36 as he tried to avenge his brother’s death. Although previously titled to be ‘South Korea’s strongest S-rank,’ we are later shown how undeserving of the title he is. While some may say his way of thinking is sly or emotionally driven, others can only view it as foolish and cowardly.

If things were different, it would have been wonderful to watch him grow both as a person and as a hunter. However, it is also important to note that due to his combat skills and short temper, he fits into the quick and reckless fighting frame.

We met this fiery but not hotheaded mage in chapter 66, where he’s portrayed as a sly snake by many. He is titled to be ‘The Ultimate Soldier‘ due to his wide-ranged fire magic, amazing combat skills, and ability to handle pressure well. He is also the guild master of Hunter’s guild. His skills include Flame Barrier, Flame Dragon, and Flame Spear, all of which played a huge role in the Jeju Island raid victory. His only shown weakness is his barrier inability to handle multiple foes at once.

The guild master of the White Tiger Guild was introduced to us in chapter 59. While he began as a calm and collected leader, we were later shown the wild humanoid white tiger form of his transformation magic. Although armed with brute strength and claws, he seems likely to be overpowered by multiple long-ranged attacks. He was also thought to be the weakest S-rank in the Jeju arc, which is why he didn’t take rank 4.

If you haven’t fallen in love with this strong, talented character introduced in chapter 81, there might be something wrong with you. She is one of the few female S-rank hunters with great combat ability. She has a heightened sense of vision and smell– called mana smell, which lets her evaluate and pick her opponents wisely.

Her skills of quick thinking, Blade of Light, Blade Dance, and Tremor of Provocation granted her an advantage over the Jeju island arc. Even in her fight with Igris, she displayed impeccable combat skills. Further, her great swordsmanship and heightened speed, and thinking ability are what make her deserve this spot.

We met the man titled the ‘S-rank Among S-ranks’ and the Chairman of the Korean Hunters Association in chapter 78. We later find out that he was one of the most powerful hunters in his prime and continued to be long after. He possesses immense power and ability due to his position as a reincarnated Ruler. Since he can easily take on most guild masters, and emerge victoriously, his title of being ‘The Sky Above the Sky‘ fits him like a true crown.

The thought-to-be-dead father of our protagonist was later shown to be very much alive in chapter 68. Although seen very little in the beginning, we later find out that he was trapped in a dungeon for 10 whole years. The experience and abilities he learned there further enhance his abilities as the medium of a Ruler.

As we watch him grow stronger and learn of his defiance to the Rulers, one can’t help but notice the similarities between the father and son. And of course, it’s not just all this that secures his rank as No. 2 but also his sheer willingness to take on two monarchs and barely hold his own that makes him deserving of the rank.

We watched our protagonist suffer and grow since chapter one, and now, we can’t help but feel immensely proud of how strong he’s become. The previous E-rank and weakest hunter now can summon hundreds of immensely strong shadows. His enhanced senses and ability to increase endurance, stamina, speed, and other stats leave his offense unavoidable and his defense impenetrable. Further, his other skills like Dominators Touch, Rulers Authority, and Shadow Exchange only improve and ensure vital strikes, thus making him the strongest. And if you thought this was enough, you’re going to be proved wrong as we watch his merging with Ashborn.

This concludes our ranking for the Top 10 Strongest Korean Hunters based on the web novel. Fans can also read the Web Novel and the latest Webtoon series from w3 or Webtoon. We’ll be back again with articles to keep you updated on the series, so until then, stay safe, stay tuned, and stay hyped.