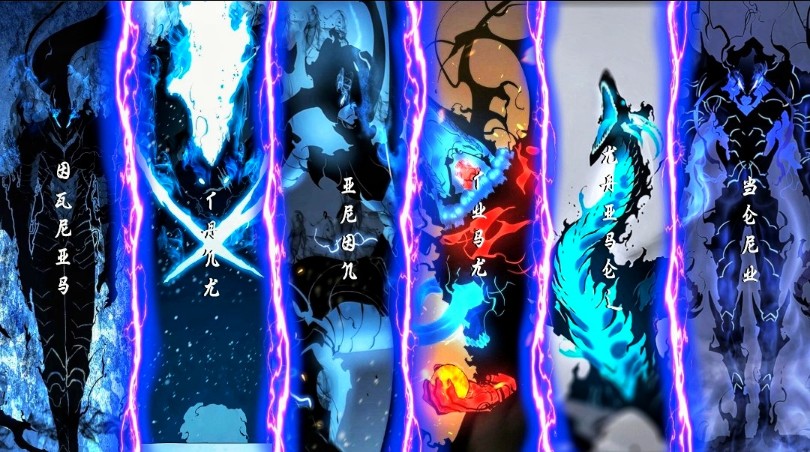 An Adaptation from the Web Novel “Only I Level Up“, Solo Leveling covers the genre of Action, Adventure, and Fantasy, written by Chu-gong and published by D&C Media. Later this Web Novel was adapted into a Webtoon series and was illustrated by Dubu from Redice Studio which gained massive popularity in the Webtoon Community.

With unique character design and an artistic series, Solo Leveling enthrall its reader by its Protagonist Sung Jin-Woo, who in fact is deemed as the World’s Weakest hunter of E-rank class grows from being looked down upon by almost everyone to being the Strongest Hunter in the World.

In the Web Novel, the protagonist, Sung Jin-Woo was chosen by the System to become the next Shadow Monarch. Monarchs were the powerful monsters of calamity and also the archnemesis of the Rulers who wanted to invade Earth as their new home ground. Sung Jin-woo, as a player, when leveling up started acquiring different sets of skills and abilities.

One of his unique skills is called Shadow Extraction, this skill enables him to extract the mana out of anybody without life and turn them into a shadow soldier. As his journey continues as a player and a Hunter Sun Jin-Woo is seen acquiring a lot of shadow soldiers and finally makes an Army of shadows fight for him. In this post, we are going to talk about the Top 10 Strongest Shadows of Sung Jin-Woo and also ranked them according to their ranking and power.

On the 10th rank, we have the Shadow High Orc which was first introduced in chapter 73 of the series or the Hunter Guild Gate Arc. These High Orcs were under the command of Kargalgan who was massacred by Sung Jin-Woo and later used his skill Shadow Extraction and added them to his shadow army along with Kargalgan.

Tank was originally the boss of the Ice bears who was introduced in the Red Gate Arc of the series. After entering the C- rank dungeon, Sung Jin-Woo and four others were forced to form a party since the raid leader  Kim Chul excluded anyone lower than the C-class rank. Later in this arc, we can see Jin-Woo attacking the Ice bear Home and decimating them. Tank after defeated by Sung Jin-Woo was added to the shadow army. Since tank possessed great physical strength, endurance, and enhanced senses he is ranked 9th on the list.

Kaisel was a Wyvern by nature, who possesses enhanced strength and sense and also has the ability to fly. He was also the mount for the Demon king Baran from the Demon Castle who later was eliminated by Iron. Using his shadow extraction skill, Sung Jin-Woo turned him into a shadow soldier naming his Kaisel. After the Shadow extraction, his grading was that of a Knight. Hence, he ranks 8 on the list.

Iron was originally an A-rank hunter named Kimchul before Sung Jin-Woo turned him into a shadow soldier. After he was extracted his full plate armor, became even larger in size. He can even taunt enemies using his skill. Iron could easily defeat an Ice bear boss of B-rank, and so he ranked 6th.

Tusk was originally a High Orc shaman named Kargalgan and was the former boss of the Hunter Guild Dungeon who led a horde of High Orcs. Tusk was an Elite Knight Shaman when he was extracted by Sung Jin-Woo and later became a Commander after he leveled up. His powers and spells became stronger with levels and later after Sung Jin-Woo defeated the Shadow Monarch, he became even stronger and also gained the ability to talk. He possessed magic skills like Gravity magic, Telepathy Negotiation magic, and communication. From gaining level, Tusk can grow even stronger, thus he is ranked 5th on the list.

Greed was originally an S-ranked Hunter, namely Hwang Dong-Su who was crushed and was later turned into a shadow soldier by Sung Jin-Woo. After extraction, Greed was graded as a Commander rank and could also conversate with Jin-Woo. As seen in the series, only commander grade or higher can conversate. Since he was graded as a Commander after extraction, he ranks 4 on the list.

The Blood Red Commander Irgis or Irgis was one of the first shadows Sung Jin-Woo acquired while doing his Job Change Quest. He was first extracted as a Knight grade and later in the story Igris development as a shadow soldier became a Marshal grade. He possesses abilities like extreme speed and strength. He could also use skills like Dominator’s touch giving him the ability to manipulate objects by hand. Thus, being a Marshal grade, he ranks 3rd on our list.

Beru was originally an Ant-king, a magical beast of S-grade that appeared during the 4th Jeju island reclamation raid. He was later eliminated by Sung Jin-Woo and extracted as Commander grade and was the first one to display the ability to communicate with Jin-Woo. He was very agile and possessed abilities like healing and paralysis poison.

He has also special abilities like Gluttony which made him gain the skills and abilities of those who he devours. He can even manipulate his size and appearance, giving his enhanced strength abilities while sacrificing his agility. Overall, Beru is a very strong shadow soldier as compared to his peers and so he ranks 2nd on our list.

Bellion was originally the servant of the shadow monarch, Ashborn before he died. As seen in the Web Novel, Bellion possessed two pairs of wings which in fact states that he is a very powerful being, as powerful rulers had three pairs of wings. He can be seen wearing a full set of armor and holds a unique sword, shaped like a centipede with parts connected which can also be used as a whip. When Bellion and Beru dueled each other, Beru’s direct hit couldn’t even faze this beast. No wonder Bellion is the Strongest Shadow of Sung Jin-Woo and so he ranks number 1 on our list.

Note- This image is fan-made. Currently, Bellion is not officially appeared in the Solo Leveling manhwa.

This concludes our Ranking for the Top 10 Strongest Shadow of Sung Jin-Woo. The following ranking has been done through research and speculations and also referring to the Web Novel. Fans can also read the Web Novel using this platform WebNovel and the latest Webtoon series from w3 or Webtoon.