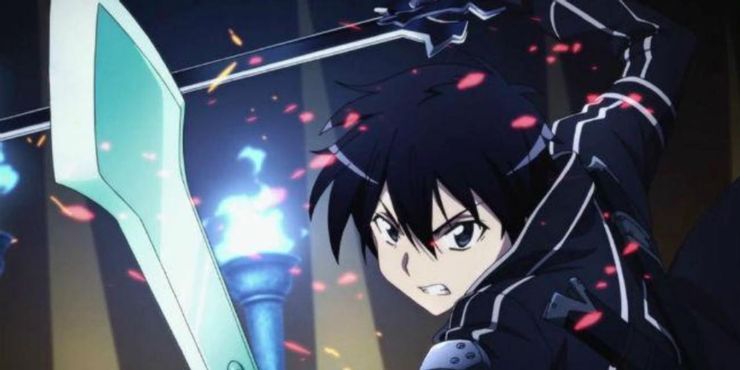 Game anime is a genre that encompasses anime which are set on themes that can be about a particular video game or any game in general, about gamers, or themes where the main character gets transported into a video game-like scenario.

For those who love both games and anime, here is a list of Top 10 Game Anime ranked based on their MAL (myanimelist) score, which is on a scale of 1 to 10.

You can find these anime on Netflix, and if the Netflix in your country does not have the anime you need, you can always purchase a good VPN to access anime from other countries.

Watch Gamers if you love anime and video games. Though there is not much story progression in this anime, it has some romance and a lot of humorous instances to make up for that.

The story follows Keito Amano as he joins the video gaming club in school because the cute President of the club recruits him, and he joins since he is smitten by her.

SOA is another great watch for people who love both anime and games. The basic theme the anime follows is the characters getting trapped in a virtual reality game, and they have to clear the levels to escape.

Sword Art Online has a simple plotline, but it can get confusing in certain instances. However, the anime is enjoyable and unique regardless. SOA is one of the top-tier anime in the MMPORG genre. It has amazing animation and visuals coupled with catchy soundtracks and background scores.

Bofuri has a cute main character with a simple and entertaining world-building. The story follows Kaede Honjou as she joins a game and accumulates all her points into upping her defense levels since she has a strong desire not to get hurt.

As a result, she has no magical skills and has slow speed. But as she gradually progresses in the game, she becomes one of the players with the highest defense and powerful skills.

High Score Girl is based on arcade games. It is set in the early 90s, where the gaming culture is not yet popular, but arcade games are. The anime has a unique art style which is one of its notable features. It has a cute and heart-warming romance.

The story revolves around Haruo Yaguchi, an aspiring gamer who takes pride in his gaming skills, making him the best player in the arcade. Things go downhill when Akira Oono easily defeats him in an arcade game.

Overlord is my favorite game anime on Netflix. It is another one of the classic anime with the “the main character stuck in a video game” trope. This anime can hook you from the pilot.

The protagonist of this anime takes on the role of an antagonist. He knows the consequences of his actions and willingly accepts them. Therefore, the story has a darker aesthetic which sets it a little apart from other anime about games.

The storyline is unique, and the anime also has some interesting characters and world-building.

Log Horizon follows the protagonist, Shiroe, who is socially awkward and loves playing games. The story moves forward as he gets trapped inside a role-playing game, Elder Tale, which happens after a new update of the game is installed.

The anime has some heavy dialogues and contains certain political themes. However, the story is engaging, and the main character is quite different from the typical gaming anime protagonists.

The anime has a fantasy/adventure setting where the characters learn how to survive and build their new world.

The anime focuses on Naofumi Iwatani as he becomes one of the Four Heroes summoned into the kingdom of Melromarc. However, he is granted the title of the weakest of the heroes – The Shield Hero, who has no offensive abilities or any special skill, nothing but a shield.

The anime has an RPG setting, with the heroes being able to level up and acquire new skills. It is another great watch for fans who love both games and anime.

Konosuba is not your typical ‘mc gets transported to another world and gets powerful’ kind of anime. However, Konosuba does an exceptional job of parodying such themes.

The protagonist, Kazuma, is a reclusive gamer who dies an embarrassing death. In the afterlife, he is given two choices: to move on to heaven or get reincarnated into an MMPORG-like world where he gets to battle monsters.

Kazuma chooses the latter and, for his wish, asks for the goddess Aqua to accompany him. But it turns out Aqua is useless. Konosuba is a good watch if you are looking for humorous anime intertwined with the MMPORG genre.

No Game No Life follows Sora and Shiro, two pro gamer siblings who go under the username “Blank.” The God of Games summons them to a chess match which they win.

As a result, they are taken to Disboard – a world where everything is settled through games. Shiro and Sora, thus, set out to conquer this world. This anime has an interesting plot with sincere and dedicated characters to playing games. It also has beautiful graphics, which makes it a worthwhile watch.

Death Parade is the best game anime available on Netflix. It has an intriguing plot entangled with interesting characters. The plot is unique, and it does a good job of bringing attention to the characters in depth.

Death Parade is about Decim, a mysterious man who runs the bar, Quindecim. People somehow land in Quindecim after they die, where they are engaged in games that decide if they go to heaven or hell.

This concludes the list of Top 10 Game Anime on Netflix. If any of the anime listed above is not available in your country, you can always purchase a good VPN to access Netflix from another country. You can always come back for more Top 10 lists of anime across different genres.