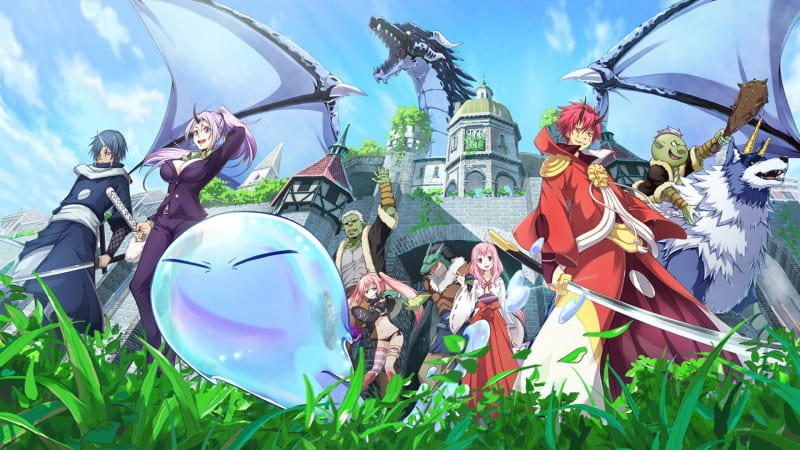 In recent years the Isekai genre has gained popularity among fans. Be it in the form of manga, webcomic, novels, or anime. Isekai generally means the protagonist gets transported to a brand new world and has to survive there. And most of the time, the character has knowledge of their previous life.

The fun thing is it can happen to anyone, and they can even get stuck inside a game! Moreover, there is always a high chance that the other world will have strong antagonists, and the protagonist has to save it with prior knowledge. But in this post, we are going to discuss Isekai Tensei, where the character dies in their original world and gets reincarnated into another world. So, without any delay, let’s know the Top 20 Best Reincarnation Anime!

Plot – Shingo Ichinomiya, after dying under the workload of his office, wakes up in the body of a Wendelin Von Benno Baumeister. Even though he occupies a noble body, he is the 8th son of some poor noble family. And decided to change his social and financial status. Moreover, his magical aptitude might be the solution for achieving his goal.

Plot – Have one ever thought about transitioning to another world with a smartphone? Meet Touya Mochizuki who gets accidentally gets killed by a God. And as an apology, he gets to live in a fantasy world while keeping his smartphone. Follow him as he discovers magic while suffering romantic moments from the girls surrounding them. Will he be able to navigate in the new world without getting distracted?

Plot – Everything is always fun when ones have friends besides themselves. And that’s exactly what happened to seven Japanese high school students when they find themselves in a fantasy medieval world after dying in a plane crash. Follow them as they try to repay the people of that world for their kindness while finding ways to return to their world. If that’s not all there is even a legend saying seven heroes from another world will defeat an evil dragon!

Plot – Another reincarnation anime that can’t be overlooked. The story follows Shin who gets reincarnated into a fantasy world where the great wizard Merlin raises him. As time goes on, he shows talent both in martial arts and magic. But on his 15th birthday, he discovers he didn’t develop any magical aptitude only combat skills. To overcome this, Shin enrolls in Magic Academy and finds himself as a celebrity as soon he arrives. Follow Shin as he defeats powerful foes and making friends along the way.

Plot – This anime will take one through a journey in both nonsenses yet mysterious worlds. Harumi Kazuhito is a fan of an author named Kirihime. One day, he dies after saving his favorite author but gets reincarnated as a dachshund dog. Every day, he spends his time without his books and soon meets a sadistic woman with a pair of scissors. What’s more that woman is Kirihime!

Plot – Meet Misato Kurihara who only wants to live a normal life in a new world after being transitioned there. But she gets reborn in the body of  Adele von Ascham, a daughter of a noble. Determined to live an average life she runs away from her home and enrolls in a hunter school using the name Mile as an alias. Will she be able to hide her potential when she finds herself in crazy situations every moment?

Plot – Tsubasa Kurata, an otaku, gets reborn in the Fremmevilla Kingdom after dying in an accident. And this world is not ordinary. Here mechs called Silhouette Knights are used to battle against powerful demonic beasts. So, he enrolls into Royal Laihaila Academy to create his Knight one day. But before that, he has to protect the kingdom while teaming up with twins and survive.

Plot – Salarywoman Azusa Aizawa gets reincarnated as an immortal witch in another world after dying most strangely. To spend her time leisurely she ends up killing slimes for money. But who knew after hundreds of years her experience points reached max level. She decides to hide from doing excess work but soon a dragon named Reika finds her for battle. Will she be able to continue her normal life when friends and foes alike are looking for her?

Plot – Sometimes a normal day can turn into a catastrophe. The same goes for these high schoolers but a handful of them gets reincarnated in a fantasy world as nobles, royalties, etc. But one girl gets reborn as the lowest spider and discovers the world has an RPG system. So, she sets out to kill opponents to become stronger and have a better life while leveling up.

Plot – Demon King Anos Voldigoad to end the war between humans and demons willingly sacrificed his life. And the demon world created Demon King Academy to wait for their lord. He gets reborn after two millennia and enrolls in the academy to claim his rightful title. But soon finds out the new world has less magic and his deeds are hidden under the name of an imposter. So, he takes it upon himself to teach his descendants that he is back and uncover the truth.

Plot – Ayumu Aikawa, a high schooler, awakens beside a girl named Eucliwood Hellscythe after getting murdered. But that’s not all the mysterious girl tells him she resurrected him by turning him into a zombie. He eventually sets to hunt down his killer and along the way ends up absorbing the powers of Haruna. As a result not only he has to find his killer but also hunt down creatures called Megalo,  monsters that terrorize the human population.

Plot – Based on the same name of a popular manga follows the story of a girl who gets reincarnated in an Otome game. But unfortunately, she gets reborn as Katarina Clae, the main antagonist of the story. A character who faces doom in every route taken. Determined to change her fate she uses her previous knowledge to influence not only her life but also the people around her. Will she be able to change her fate without raising certain death flags?

Where to Watch –GoGoanime (Unofficial)

Plot – The story follows the Tang sect’s prestigious disciple named Tang San. Even though having the prestige and honor he chose to obtain the sect’s forbidden lore. Now satisfied with the knowledge jumps off from Devil’s Peak. But gets reincarnated in Douluo Continent where each person has an innate spirit. Eventually takes part in the Spirit Master ceremony and discovers he has the world’s weakest spirit despite having strong spirit power.

Where to Watch – Wetv

Plot – Toyohisa Shimazu after getting wounded at the battle of Sekigahara in 1600 finds himself in a modern hallway. And has a chance meeting with a stoic man named Murasaki. But the odd thing is the hallway has hundreds of doors on both sides. And soon finds himself in an odd world after getting pulled to the nearest door. This new world is full of strange creatures and even warriors from different eras. Will he be able to survive when he has to battle against Ends as Drifters?

Where to Watch –Crunchyroll/Netflix

Plot – Another anime based on a well-known manga with the same name. The story follows Tanya Degurechaff who is infamous for her tactical and ruthlessness in war. But there is a twist a soul of a man who self-proclaimed himself as God resides in that body. She is determined to get the highest rank of the military but her actions have consequences, i.e., her country becoming the strongest nation in history.

Where to Watch –Crunchyroll/Netflix

Plot – Urano Motosu is a bookworm and has a dream to become a librarian but unfortunately her life ended in an accident. But she gets reincarnated in a world where books are scarce and have to be handwritten which makes them further expensive. Despite odd circumstances, she is determined to make the books herself.

Where to Watch – Kissanime/gogoanime (Unofficial)

Plot – The list will not be completed without mentioning this anime. The story revolves around Satoru Mikami, an average office worker, who dies after getting stabbed by an unknown assailant. He gets to start over in another world but as good of slime and has the ability to mimic any form. Follow Satoru as he befriends odd people while altering his fate.

Plot – We have finally entered the Top 3 of the list and this popular anime without a doubt takes third place. Meet Kazuma Satou gets to choose to reincarnate in a fantasy world after death. Eventually, he gets tasked with defeating the Demon King and decides to choose Aqua, the goddess who gave him second chance in life. But who knew she is useless in everything in this world!

Plot – The anime is based on a light novel with the same name. The story begins with Subaru Natsuki when he suddenly gets transitioned into a fantasy world. Nothing is easy for him, and he soon gets beaten up as soon as he arrives. He gets saved by a girl named Satella, and to repay her, he decides to help find her lost insignia. But as they were close to finding it, they get brutally murdered. In a turn of events, Subaru gets transferred at the beginning of the journey, i.e., getting beaten by the thugs. And soon discovers history repeats upon dying, and sinister force is lurking in the shadows.

Plot – We have finally entered the first place on the list. This anime follows a 34-year-old shut-in who, for the first time, decides to do something heroic. But it eventually leads to his death, and in a strange turn, he gets reincarnated as Rudeus Greyrat, a loving baby between two loving parents. As the years pass, he starts to show talent in magic while preserving memories from his previous world. Follow him on his journey as he conquers his past trauma, all the while finding love.

Where to Watch – Hulu/Netflix

With this, we conclude the Top 20 Best Reincarnation Anime of all Time post. The list has been made based on our research and ranked according to their ranks. Let us know your thoughts in the comment section down below. We will be back with more recommendation articles. Till then, stay tuned and stay safe.