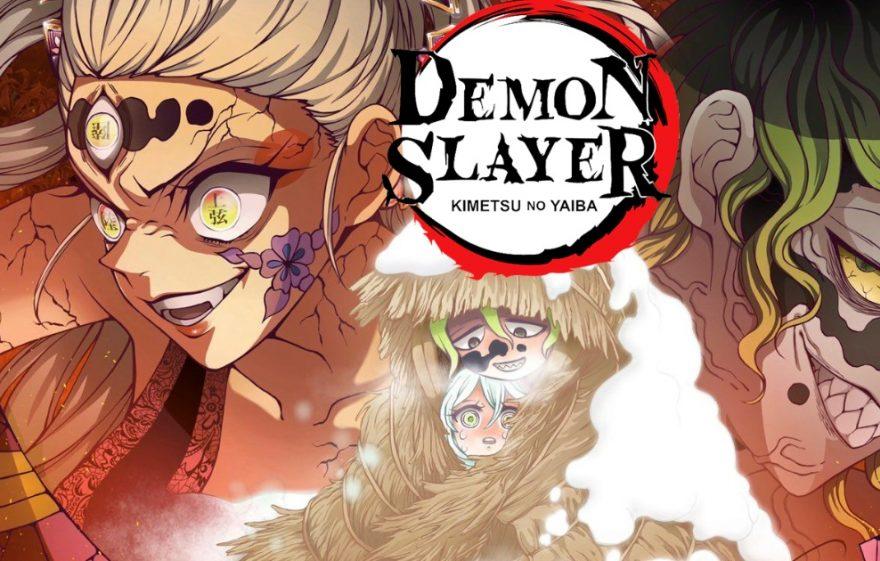 In today’s article, we will discuss the Demon Slayer upper Moon 6 siblings. And do, if you’re already here, we have for you Demon Slayer: Upper Moon 6 Daki & Gyutaro: History & Power Explanation.

Here, we will discuss the Upper Moon siblings Daki and Gyutaro, who took over the Red Light District of Japan through the back alleys. They initially started by kidnapping most brothel workers who raised suspicion due to their sudden disappearance.

Thus the protagonists of this arc will be our favorite originals accompanied by the Sound Hashira. So, without further ado, let’s get into the Demon Slayer: Upper Moon 6 Daki & Gyutaro: History & Power Explanation.

The birth name given to Daki was Ume, who was born in the entertainment district of Japan. Here she lived in the lower caste area called Rashomogasi, which was plagued with sick brothel workers.

In this area riddled with sickness, her birth was most likely an unwanted pregnancy, and so her mother hated her due to her appearance that he was extremely pretty to the point that people would give anything just to see her smile.

Thus despite their extreme poverty, her brother Gyutaro and she had hope for a better future due to her appearance. This held through as she was immediately recruited in a high-end brothel in her pre-teen years, where she received the best of education and care.

However, she was met with early death after she stabbed the eye of a customer who was a samurai in the absence of a brother. She ultimately died a brutal death while defending her brother’s name to her last breath.

Gyutaro is Daki’s older brother, born a few years before her. As mentioned before, due to extreme poverty, he too was most likely a child of an unwanted pregnancy.

Since his mother could not afford to feed him or herself, she often abused him to the point that his appearance was disfigured. However, he managed to survive but was constantly ridiculed by others due to his arrival.

With the birth of Daki, he soon found a reason to survive and a person to protect. With Daki’s perfect looks, she was soon recruited into a brothel, and he had the opportunity to work as a collector for the debt and payments of her customers.

As an incredibly caring brother, it is only natural that he was distraught about her death especially considering the charred state of a body. Due to this, despite being severely injured, he continued to carry her charred body begging for any kind of help for his sister.

Finally, the Upper Moon 2 Doma converted the two into demons, who felt pity for the almost dead siblings.

Daki’s Blood Demon Art is called Obi Sash Manipulation. Here, her flower pattern obi sashes are created as extensions of herself, and some sashes even have a certain level of sentience.

She is able to freely manipulate the movement, sharpness, texture, and heaviness of her sashes. Plus since she can convert any part of a body into a sash and thus prevent her head from getting cut off.

Further, her sashes can also store humans in a 2D fashion. Thus she can move through the most narrow areas without being noticed. Due to her sashes, her battle range is extremely flexible which lets her play on the offensive and defensive at the same time.

Daki is a secondary holder of the Upper Rank 6 position and is considered to be a special demon by Muzan himself. In the past, she managed to kill and eat 7 Hashira, which gives us an accurate measurement of her strength.

However, it is important to know that it is Gyutaro that actually holds the true power and enhances hers through his core which is embedded in her body.

There are 2 ways in which Daki avoids decapitation. One is by manipulating her neck into the texture of a light sash, and the other is through Gyutaro’s core within her which connects her life to his.

This means that she cannot be killed unless  Gyutaro and her are killed simultaneously. And since the timing of it is difficult to match, the duo is incredibly strong.

Some parts of Daki’s sashes are able to communicate with her and also act on their own. Thus she is able to find people and spy on them or kidnap them through the most narrow spaces.

This also helps her keep up with fast-paced attacks and allows her to defend herself easily. This is because the sashes themselves act as her eyes.

Daki possesses basic demon abilities, including regeneration, incredible speed, stamina and reflexes, and her Blood Demon Art. Through this, she was able to deal effectively with even the speed of Zenitsu’s Thunderclap and Flash and Tengen Uzui’s bomb attacks.

Must See- (2021) Power of Muzan Kibutsuji in Demon Slayer Explained

Gyutaro’s Blood Demon Art is Blood Manipulation. This allows them to extract his blood and then harden or sharpen it according to his liking.

Thus he is able to produce even spears of blood or even shoot it as a combo attack with his sickle attacks. His blood also contains a high amount of toxins which is incredibly poisonous to humans.

In the series, he is also known to have coated his sickles with his blood. He was able to poison even Tengen Uzui, a shinobi who was trained in poison resistance.

Gyutaro is the primary holder of the Upper Moon 6 position. In fact, he is much stronger than Daki as he has received more blood from Muzan and has killed and eaten a total of 13 Hashira.

Further, he is able to control his demon biokinesis much more accurately than Daki. While she can convert her flesh into sashes, Gyutaro can do the same with his blood, flesh, and bones.

Other than the basic demon abilities of regeneration, enhanced strength and speed, and Blood Demon Art

Through cell manipulation, Upper Moon 6 Gyutaro is able to convert his own bones into sickles. Further, he has also transformed his blood into a lethal poison.

This kind of biokinesis is done at will allows him to regenerate and also wrap his cells around a sword stabbed through him. Thus he is able to keep his opponent in place and deal with them effectively.

His core takes the form of his right eye that is embedded into the forehead of Upper Moon 6 Daki. This increases Daki’s sensory perception, makes her more substantial, and also allows her to keep up with multiple attacks due to the added kinetic vision.

Further, this core detachment also lets them prevent death by decapitation. This is because the two can only be killed if both of their heads are cut off simultaneously.

Through Gyutaro’s core, the Upper Rank 6 siblings share a psychic bond that allows them to share thoughts and senses. Thus the two are able to work exceptionally well together during fights which makes their defense almost impenetrable.

The Entertainment District Arc begins with reports of an Upper Moon demon causing the disappearance of multiple people in the Red Light District of Japan. To investigate this, the Sound Hashira, Tengen Uzui, is assigned the case with his 3 wives.

However, when his wives go undercover and soon lose contact with him, he utilizes the help of Tanjiro, Zenitsu, Inosuke, and Nezuko.

In this arc, we will witness the Entertainment District of Japan as our favorite trio go undercover. Here, we will also meet our primary antagonists Upper Moon 6 Daki and Gyutaro.

The two siblings were born into the Entertainment District to a mother who worked in the same place. Thus they have extensive knowledge of the area and how it works, especially since Daki is the most well-known oiran in the area.

And since the two Upper Moon 6 demons are incredibly well-versed in battle, this arc is undoubtedly not going to be lacking action or excitement. This is because both demons here have unique Blood Demon Arts and also have some never seen demon qualities.

With this, we conclude with our article on the Demon Slayer: Upper Moon 6 Daki & Gyutaro: History & Power Explanation. In this article, we hope to have explained the powers and history of the Upper Rank 6 siblings well. And we hope to have added some new knowledge to yours. Fans can watch Demon Slayer Season 2 officially on Netflix. Or if you want to watch Demon Slayer Season 2 for free, read the article here to know the procedure.

We’ll be back again soon with some more articles like Demon Slayer: Upper Moon 6 Daki & Gyutaro: History & Power Explanation. So until we are, we hope you stay safe, tuned, and hyped for our other ones.