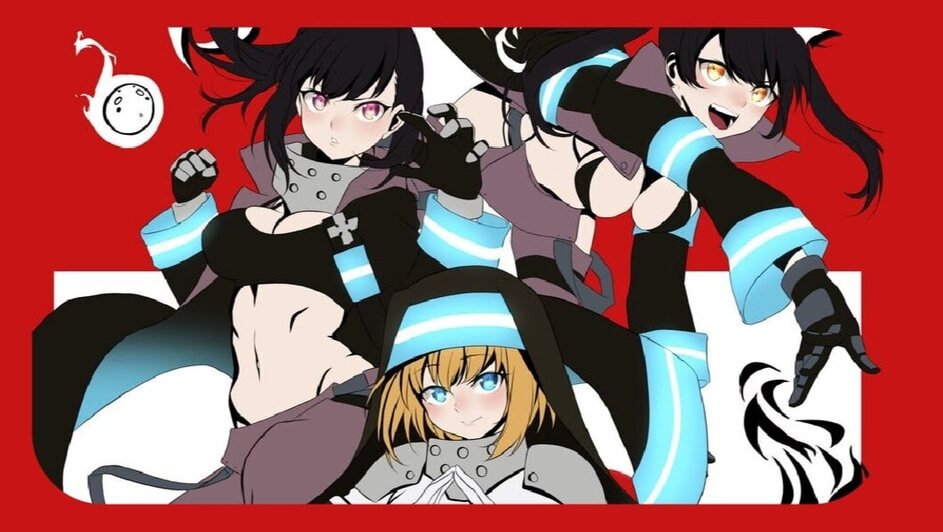 The Fire Force manga series, illustrated by Atsushi Okubo, began in 2015, and David Production hasn’t let us down with its animation. Keeping the hype of its recent release, we’d like to bring to you 15 Hottest Fire Force Female Characters Ranked.

The plot of the adventure sci-fi series is set in a world recovering from a disaster caller, the Great Cataclysm. Years later, Tokyo is powered by an energy source called Amaterasu.

After infernals begin causing destruction, we meet the protagonist Shinra and many other well-written characters looking to help. But with colossal government secrets being unravelled and other interferences, the fate of the land now weighs on them all.

If you haven’t watched the anime, we highly recommend you do, as Fire Force characters are definitely some to look at. The fan service of the Fire Force female characters, too, is definitely adequately sprinkled throughout, so it’s a definite treat.

In this article, we aim to list and describe the Hottest Fire Force Female Characters. And towards the end, we’ve also added for you some of the most asked questions about the Fire Force Characters.

Orochi is a 3rd Generation pyrokinetic within the Knights of the Purple Smoke. This short blonde curvy woman is a member of the White Clad. She is often displayed as confident and, most of the time, comes off as emotionless.

Nevertheless, she is calm and collected and well aware of her skills. Her Ignition Ability is called the Medusa Whip, and due to its power, she tends to get egoistic and self-centred.

Ritsu is the self-proclaimed Maid of The Underworld. She leads the Knights of the Purple Smoke and is the Guardian of the 5th Pillar, Inca. She possesses the ability of necromancy and can control the dead and therefore create and control infernals.

This teal-haired woman is often portrayed as calm, focused, and sensible and was introduced to us in the Hajima Industries Arc. She takes her responsibilities to Inca very seriously and is completely dedicated to her.

We were introduced to the Puppeteer in the Hajima Industries Arc, where she belonged to the skill development laboratory. She is a cheerful and friendly girl with pretty purple eyes and dark hair.

Her job of creating puppets ensures that her intellect is put to use. Further, although she is sinister with opponents, she is always striving to be better and aiming to improve her puppets.

Haumea is a third-generation pyrokinetic White Clad and the 2nd Pillar who possesses the Adolla Burst. This slightly crazy woman possesses blonde hair and wears a crown-shaped visor.

She displays her playful and sadistic side in a cute baggy onesie. However, she is very confident in her abilities but tends to be temperamental. She also has the ability to manipulate brain waves through electric shock.

Inca, previously known as the Fire Thief, joined the White Clad after being declared the 5th Pillar. She’s always looking for the thrill of adventure and danger and is most probably an adrenaline junkie.

However, her narcissism and selfish behaviour do have some sort of charm as she keeps looking for danger and challenges, especially when the pink-themed freak enjoys herself like a maestro with her ignition ability.

The most striking feature of Arrow is her blue eyes that have arrow-shaped irises. She specializes in long-range attacks and is called The Sniper of the White Clad.

Being a part of the Knights of the Ashen Flame, she is the Guardian of the 3rd Pillar, Sho. Other than being seen as tranquil and serious, she is also extremely loyal and dedicated to following Sho without question.

The captain of the Special Fire Force Company 6 is a tall woman with boyish short black hair. She was the surgeon who played an important role in treating Shinra after he was stabbed by Haume.

She is methodical, objective focused and very capable in terms of taking up tasks. However, she does keep to herself and gives off a somewhat mysterious vibe.

This kind and caring person is the mother of Shinra and Sho Kusakabe. Many of her appealing features, such as her smile and concern for others, have been passed on to her son.

Further, her selflessness, as seen in the events of the release of their Adolla Burst, was truly commendable. And it is probably from her that Shinra understood the need to protect others.

Amaterasu is the 1st Pillar and the survivor of the Great Cataclysm. With her Adolla Burst, she powers the entire Tokyo.

In terms of looks, the pale blond is a close doppelganger to Iris. However, she does have a rather deranged smile and is mostly manipulative in nature which puts her at this place.

Asako is the Lieutenant of the Special Fire Force Company 6 and a second-generation pyrokinetic. Specializing in medicinal pyrokinetic, she is characterized by pink hair and glasses.

She is the granddaughter of Soichiro Hague and shares a striking resemblance with him. In the anime, she often interacts with Shinra during the final episode and displays the most adorable reactions.

This redhead is now a technician at the Special Fire Force Company 8. We initially were introduced to her by Vulcan. She has a fiery attitude and is often seen as tough and sarcastic.

However, she also has a kind, honest and goofy side that makes her attractive. Furthermore, she can definitely hold her own as she has the ignition ability that draws forth octopus-like figures of flame.

Sister Iris is a nun of the Holy Sol Temple. She wears a habit and is a very religious person and later turns out to be the 8th Pillar. In the 8th company, she is kind, courteous, and slightly shy but brave enough to defend anyone.

She is also extremely considerate of others and an absolute sweetheart who has a childish side. However, she is also the occasional target of the series’ fan service.

Tamaki enrolled in the fire force at the same time as Shinra. Her ignition ability is called Nekomata and comes from third-generation pyrokinetic. She is the main focus of fan service as she has the Lucky Lecher Lure.

However, the twin-tailed girl is a tsundere dork who often embarrasses herself in cute ways. She’s so hardworking, friendly, and perceptive that no doubt she’s one of the hottest Fire Force anime characters.

Princes Hibana is a third-generation pyrokinetic and the captain of Special Fire Force Company 5. She is a highly attractive woman who is sadistic with both infernals and the men under her command.

Along with her eye-catching body, she also has a dominant charm often displayed when she found stepping on her men. She is also extremely smart, caring, and talented in both pyrokinesis and her research on the infernals.

Maki is a second-generation pyrokinetic and a member of the Special Fire Force Company 8. She is titled the name Witch Queen and has a very adorable ignition ability.

This adorable woman is well built not only in muscles but also in morals. She is a fun, capable fighter and adds to the comical touch of the show. However, she does have a major problem with the words Gorilla Cyclops and will attack anyone who says it.

With this, we conclude our listing for the 15 Hottest Fire Force Female Characters Ranked. We’re sure you agree that the Fire Force characters are definitely some to admire for their appearances and quirks.

Even with its recent 2nd season released in December 2020, fans can’t wait for season 3 to air. And with its high ratings and increasing manga sales, fans can most definitely look forward to a season 3.

Well, we’ll be back with another ranked article to keep you informed so until then stay safe, stay tuned, and stay hyped.