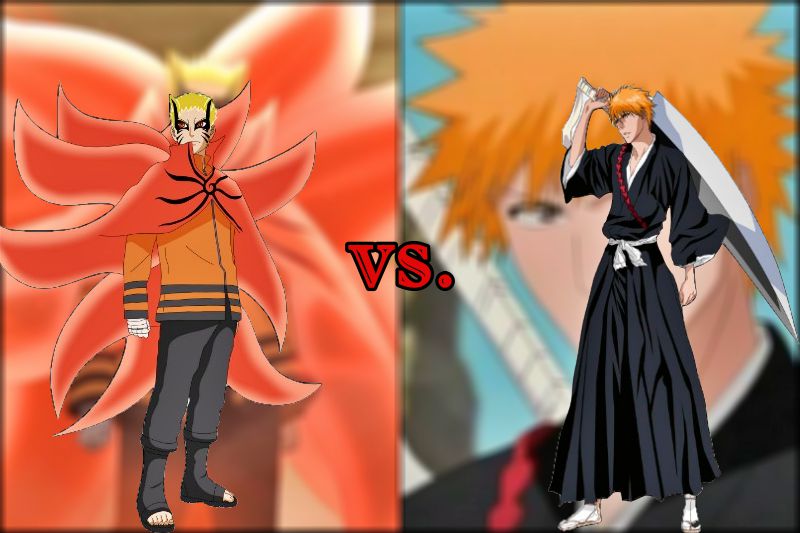 While thinking about great shonen protagonists, we can’t help but include Naruto and Ichigo on the list. Both hail from two iconic anime and the two of them have been enjoying immense popularity since their respective anime came out. Both of them are among the strongest in their own anime, Naruto and Bleach, respectively, having wide sets of powers. Their huge power levels are not only very impressive but also make us ask a particular question: who is stronger in Naruto vs Ichigo?

Ichigo has the upper hand against Naruto in terms of a time limit. During its running years, Naruto’s had plenty of power-ups that made him strong enough to defeat a god.

But it’s only recently that we’ve seen the absolute peak of his powers, appearing in Baryon Mode. On the other hand, Ichigo has also done his fair share of god-defeating against Yhwach. During that climactic battle, Ichigo’s complicated power stats finally come into full view.

If these two heroes were to fight each other, it’d be a tough battle, but Ichigo would ultimately win. There are plenty of reasons for that, too, as we’ll explore further in detail.

Naruto Uzumaki is the jinchuriki of Kurama who realized his dream of being the Hokage at the end of his series. Currently, he’s the Seventh Hokage of Konohagakure and the father of Boruto, the protagonist of the sequel series, Boruto: Naruto the Next Generation. Along with Sasuke, Naruto became the strongest shinobi in the world.

Naruto’s powers continued to grow more controlled and focused with time. It’s during his fight against Isshiki Otsutsuki that he receives his strongest and last power-up. In his Baryon Mode, Naruto becomes not only the strongest version of himself but the strongest among every other character shown in the series as of yet.

The legendary Baryon Mode comes with the following abilities:

Ichigo Kurosaki is the Substitute Shinigami, assigned to look over the Karakura town before losing his powers. Ever since Ichigo gained his powers from Rukia at the beginning of the story, he has been steadily growing to be one of the strongest characters of the series. But it isn’t until the last arc of the series that the complete powers of Ichigo are revealed.

Being the son of a Shinigami and a Quincy, Ichigo inherited powers from both sides of his parentage. Though for most of the series, his Shinigami powers are dominant and in focus, his Quincy abilities come to him eventually. Near the end of the series, during his climactic battle against the Almighty Yhwach, Ichigo reaches his strongest points.

Before we start comparing him to Naruto, let’s take a look at all the powers Ichigo possesses at his strongest:

Naruto vs Ichigo: Who Will Win & Why?

The truth is, if there is a fight of Naruto vs Ichigo, it’d be evenly matched for some time before durability comes into play. Naruto’s Baryon Mode on paper seems too powerful to handle, but it’s also a double-edged sword. Naruto can only stay in that state for a short period of time, while Ichigo can easily outstay him.

There’s also the point where Baryon Mode diminishes the lifespan of its opponent. But given that Ichigo is in his prime and, besides, is a Shinigami whose soul has a much longer lifespan that can’t be lethally affected by the Baryon Mode. Ichigo can also protect himself from Naruto’s high-powered attacks with Blut Vene.

But in the end, it’d be Baryon Mode’s own weakness that causes Ichigo to win the Naruto vs Ichigo match. Now that that’s settled let’s delve further into the individual aspects of Naruto vs Ichigo before the Shinigami takes the cake.

Naruto and Ichigo both possess superhuman physical strength, and both have their moments to showcase that. In this regard, these two are pretty evenly matched.

The duo is not only tied for strength but also for speed. Both Naruto and Ichigo show their astounding speed on multiple occasions. Judging by several incidents in their own individual story, it’s safe to say that both Naruto and Ichigo are faster than the speed of light. So, here’s another tie for Naruto vs Ichigo.

As a shinobi, Naruto has been trained to have sharp reflexes since childhood. That, combined with his super speed, gives the ninja sharp reflexes and acute agility. Dodging super-speed moves and counter-attacking within an instant fall within his skillset, and he’s shown such on many occasions in the series.

Like Naruto, Ichigo, too, has swift reflexes. Even during his first trip to the Soul Society, he could dodge and react to the attacks of some very powerful Gotei 13 captains. That sharp reflex gets even better in his Hollowfied form.

Based on how fast they both react to the movements of others, we must say that they’d be on par with each other if they were to fight.

When the focus comes to their individual abilities, it gets trickier. The Baryon Mode and Ichigo’s final form are at their strongest, which comes with many new powers.

Ichigo’s powers come from multiple sources, namely his Shinigami nature, his Quincy heritage and the Hollow he has inside him. Because of this, his powers are more spread out.

His main offensive powers come from his Zanpakuto, i.e., his Shikai, while the Hollow form enhances those powers. Blut Vene, an ability of the Quincies, provides him with his defensive powers.

But that being said, Ichigo’s complete powers are never revealed, thanks to Yhwach destroying his true Bankai in the future.

Naruto, on the other hand, is absolutely godlike in Baryon Mode. He’s so powerful in Baryon Mode that he doesn’t even have to use any particular jutsu to demolish his enemy.

His strength, speed and offensive powers are so high that it takes mere seconds for him to crush an opponent as strong as Isshiki. But the most frightening ability Baryon Mode has is the ability to take away the lifespan of an opponent with every hit.

Though, ability-wise, Naruto has the upper hand against Ichigo, we can’t really place him as the winner here, and that is because of the lethal drawback Baryon Mode has.

So, despite Ichigo’s complete powers remaining a mystery, he and Naruto tie again at this round just because of the major drawback Baryon Mode has.

In a Naruto vs Ichigo fight, durability would be the game changer. The biggest drawback of Naruto’s Baryon Mode is how little time he can afford to be in that form and how lethally it affects him while using.

Ichigo, on the other hand, has the major advantage of being a Shinigami with a longer lifespan than a human. He also has no trouble using his Zanpakuto or his Hollow form.

During their battle, Ichigo would just have to hold his own until Naruto can’t maintain the Baryon Mode anymore. So, after all these ties, Ichigo finally wins this round of Naruto vs Ichigo.

In a battle, winning is dependent upon many aspects of a person’s powers. While brute offensive powers might seem like the most important thing, that is not true, and this shows nowhere better than in a Naruto vs Ichigo fight.

Despite having the extraordinary offensive powers of the Baryon Mode, Naruto loses to the Shinigami because of how little durability he has in that form.

This doesn’t mean that he’d lose to anyone with more endurance and durability. It just means that Ichigo has the power to stay evenly matched with him while outliving him in the fight.

And this is where we conclude our point. If you’re a fan of such hypothetical versus matches, you might like our other similar articles.