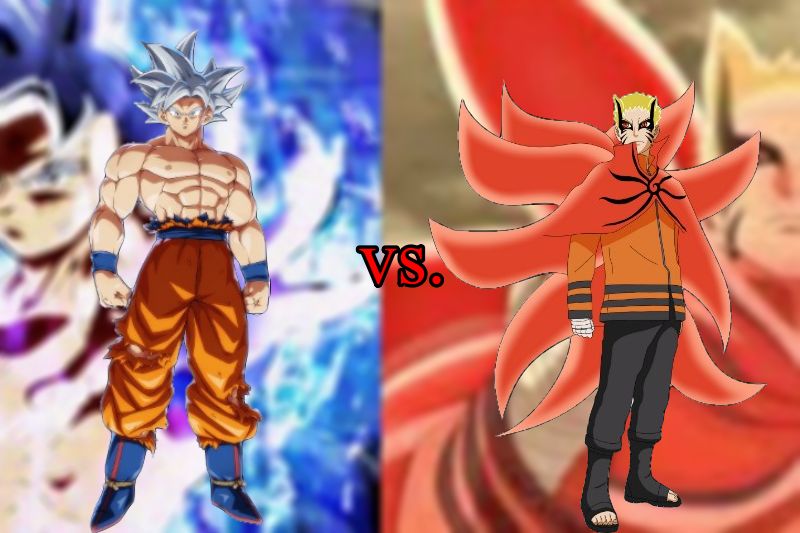 Naruto vs. Goku is a fight that fans have been waiting for ages, and today we will pass the verdict to this match. In this comparison, we are gonna compare Naruto at his full potential in Baryon mode, that he will have unlimited time to stay in this mode.

Even then, can Naruto in Baryon mode fight Goku in MUI? The answer is no. Even if we consider infinite Baryon mode time, Naruto comes nowhere close to the Super Saiyan God form of Goku in terms of strength. MUI is Goku’s most potent form, and it will overpower Naruto’s form in a matter of seconds.

Later on, in this post, we will take a detailed look at the specific reasons why Naruto Baryon mode is weaker than Goku MUI, along with their powers and abilities.

Who is Naruto? Power Level & Abilities

Naruto is the main character of the series, Naruto, and is the current Hokage of the powerful nation of Konohagakure. He is a character who was strengthened by his dream of becoming a Hokage and his countless allies helping him many times.

Naruto is one of the strongest characters in the series and is also the strongest Hokage. His abilities and powers have been recognized far and wide for him to take upon the most powerful post in his village.

Naruto in Baryon form is his strongest form yet, which also takes an inevitable toll on the user due to its robust nature. This form is stronger than Isshiki and would have defeated the latter if not for its drawbacks.

Baryon mode has a massive Chakra increase, on top of producing a special kind of energy by fusing Naruto and Kurama’s chakras. It rapidly boosts all of Naruto’s base attributes to that extent; even Isshiki and Sasuke were taken aback by its power.

This mode also has a certain amount of risk while using it and harms the user if utilized for long periods. It can also be noted that the opponent’s life span is also drained after coming into contact with Naruto while in this mode.

Who is Goku? Power Level and Abilities

His character growth is one that many fans admire and is one of the major reasons for his character’s popularity. The primary explanation is his being one of the most powerful characters in the series.

Goku’s MUI form is his most powerful form, even capable of surpassing gods with the sheer destructive force of this power. Goku easily overpowered Jiren and trounced the latter when he enraged him.

UI is already a fearful power in itself that the user can react to any attacks without thinking. It is a massive power upgrade, and this power alone is capable of destroying galaxies.

Goku had perfected this feat of mastering UI in a short span, which is almost impossible for many characters. This transformation ultimately puts Goku in a compelling position, with unbeatable speed and reflexes.

On top of boosting his speed and reflexes, this mode also boosts his strength by a lot, vastly increasing the destructive force of his blows.

Naruto, in his Baryon Mode, is a formidable foe, but he does not come close to Goku in his MUI form. Naruto vs. Goku is a battle that can be decided in a matter of a few minutes due to Goku’s unimaginable power level.

Goku(MUI) is stronger than Naruto(Baryon Mode) in all aspects, beating the latter in terms of speed, strength, durability, endurance, and destructive capabilities.

Even though some of Goku’s forms, like SSJ3 and SSG, are enough to deal with Naruto(Baryon Mode), this mode is overkill for Naruto, and the fight will end as soon as it starts.

Naruto, will not even be able to put up a decent fight against Goku, whose power rivals that of Gods and is capable of destroying Galaxies. This power release alone is enough to vibrate with a whole planet, alerting his rivals to his presence.

Even if Naruto can suck the lifespan of others, when coming into contact with him, that will be almost useless against Goku. On top of not being able to visualize Goku’s speed, Goku can safely keep the match alive with his long-ranged attacks and still win.

Goku, meanwhile, will be able to dodge all of Naruto’s attacks and punches with his increased senses, speed, and agility in his Mastered Ultra Instinct form. Goku’s power is capable enough to turn God’s attention toward him due to its fearful increase of his base attributes.

An easy win for Goku, as all of his forms, is an upgrade to his power and strength on a massive scale. His destructive capabilities, in this form, can even destroy planets and galaxies with ease.

Naruto, on the other hand, does have a formidable amount of power in his attacks, but that is only limited to Narutoverse, as he does not hold a candle to Goku’s inhuman power level. Goku also has a trick up his sleeve, as he can convert his rage into his power.

Another win for Goku, his strength increases massively and exceeds that of Gods of Destruction, some of the most powerful entities. Even the gods had understood and recognized his potential strength in this form.

As for Naruto, his Baryon Mode increases his strength, but not a massive upgrade when compared to Goku. This undoubtedly puts him at a disadvantage compared to the former’s strength.

On the abilities front, Naruto is a bit matched with Goku due to his broken ability of able to suck others’ lifespan. This might persist as a problem for Goku initially, but the latter will be easily able to find counters for this.

We can safely say that both of their abilities are almost evenly matched, containing an almost equal amount of overpowered abilities.

Goku is undoubtedly way faster than Naruto and the speed of light due to the increase of speed in his UI mode. Naruto does gain a speed increase in this form, but this does not even come close to the perfected form of Goku. Baryon Mode for Naruto does have an exponential increase in speed, but that will not be able to best Goku’s speed.

Another easy win for Goku, as just triggering his form also restores his strength and durability. This puts him at a massive advantage compared to Naruto, who has lesser durability and does not receive an upgrade of durability with his Baryon Mode. Goku also has increased endurance, which lets him prolong his battles and change the tide of battle to his win.

This is also an easy win for the MUI user Goku, as it increases his speed and reflexes by a large amount. This lets him achieve feats of dodging attacks at point-blank range and overpowering his opponents.

Naruto loses in this specific area, even with his increase in speed and reflexes in his Baryon Mode. Goku’s attacks should be very fast for Naruto to perceive, and he will be fatally injured by them, unable to dodge those attacks.

Concluding our article on Naruto vs. Goku, the winner will ultimately be Goku, as we all know how overpowered his MUI form is. It also might not come off as a surprise that Naruto, in his infinite Baryon Mode, will not even be able to fight Goku. The fight of Naruto vs. Goku would be over in an instant, with the latter easily overpowering and winning easily against Naruto.