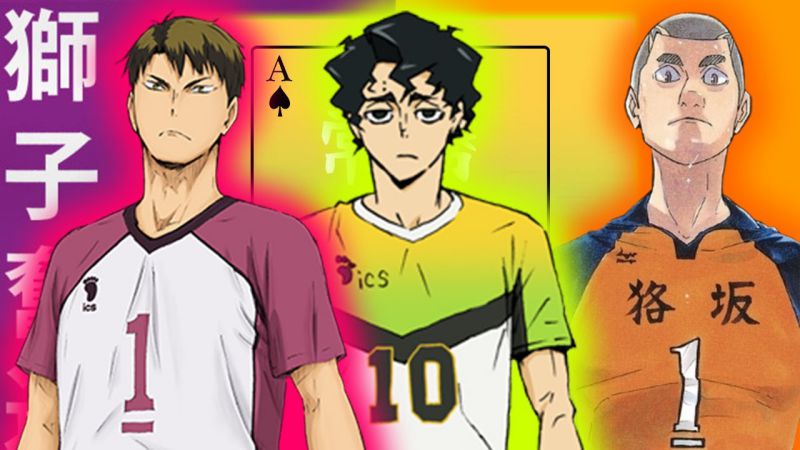 Haikyuu has seen a lot of popularity with its simple storytelling and jaw-dropping matches. In the plot, Haikyuu Aces are the most important characters since they collect the most points for the team. Thus, today we will be taking a look at the top 10 best Haikyuu Ace.

It is also interesting to notice, Haikyuu Top 3 Aces  who we are familiar with will not make the top 3 of this list. Without further adieu let us start with the rankings.

The successor of a top-three ace in the country who is feared by everyone is bound to take his place in the top 10. He used to play for Shiratorizawa Academy and was tipped to be Wakatoshi’s successor. Goshiki had the technical abilities and height needed to overtake Wakatoshi along with a powerful spike.

However, he was arrogant and refused to learn anything from Wakatoshi. He was only able to achieve the next phase in his growth once he stopped viewing him as his rival.

Asahi is the perfect example of a player who is rough on the outside while being soft on the inside. Initially, he lacked the grit and determination to push his limits but slowly turned into an ace on whom the entire team can rely.

He possesses the capability to carry his team over the line all by himself and break through a high wall made by the blockers on the opposing team. Asahi leveled up his gameplay by mixing up his techniques with a back-row attack and delayed spike

Kanoka Amanai dominated her matches due to her giant height, which gave her an insane advantage in most of the matches. She had always been taller than everyone since her childhood, and once she discovered volleyball, there was no stopping her.

Her height helped her to tower over her opponents as she slowly brought power into her game. She developed into a first-class ace of her country and led her school volleyball team to the nationals.

Korai is an exceptional all-rounder who can probably be in the top 10 of a setter, middle-blocker, and libero too. Despite his small height, which would practically put him in an unfair position, he pushed past all his limits and focused on his jumping power and athletic abilities.

He can jump to insane heights and spike from a high point, making it impossible for the opponent’s middle blockers to stop his shots. His utility as a player makes him stand out since he can cover every position of the court with equal precision.

Ojiro Aran is a foreigner who plays in the reputed school of Inarizaki High, famous for making top-class players. The fact that Ojiro Aran made himself stood out among the powerful Miya twins speaks a lot about his capabilities as his team’s ace.

His strength is his brute power that can send the balls flying in the opposition court, giving them very few seconds to react to it. He is also one of the top five aces of the country alongside Bokuto.

Wakatsu Kiryuu is known as one of the Haikyuu top 3 aces alongside Wakatoshi and Kiyomi. He is a natural leader and a wing spiker who made his way into the Japanese National Team. He has a habit of over-analyzing plays to find his opponent’s weakness and thereby tear through it.

Despite being one of the best players in the country he lacks confidence and his insecurities in his abilities are often exposed in the matches.

Bokuto could have been easily known as one of the top three aces in the country if not for his highly emotional self. He is a Haikyuu ace who can play to his strength as long as everything is going smoothly and the spotlight is on him. Whenever something unnatural occurs it tends to throw Bokuto out of his game.

However, he is still a fantastic player with his cross-shot and feint which are very difficult for the blockers to track.

Wakatoshi is that ace in Haikyuu who has a scary aura about him. He has all the features needed for a top ace, including his natural athleticism and tall height.

Moreover, what makes him unique is the fact that he is a left-hander, which poses a lot of difficulties for the middle blockers to mark him.

Combining his left hand with his powerful spike, he can make some amazing plays leaving his opponents bewildered.

Haikyuu to the top has seen many prodigies in this sport, and Sakusa is one of them. He is a germophobic whose sole focus is on improving his game.

His calm and collective demeanor helps him massively in his game. He doesn’t lose focus easily, even in the most desperate of situations.

His flexible wrists help him to direct his spike in any direction with precise accuracy and massive power.

In this Volleyball Anime, people have not yet seen the genius of Oliver Barns. However, manga readers know exactly what he is capable of. He is the tallest character in the series, which goes on to show why he is so highly rated and feared by every other player.

Despite that, he has no arrogance and is extremely friendly. He doesn’t focus on defense and is known to break through his opponents with sheer offensive prowess.

With this, we come to the end of our top 10 best Haikyuu aces. It is safe to say that the aces in Haikyuu have various techniques in their artillery, and they have all amazed us with their plays. Haikyuu can be binge-watched on Netflix while the manga can be read in Crunchyroll.