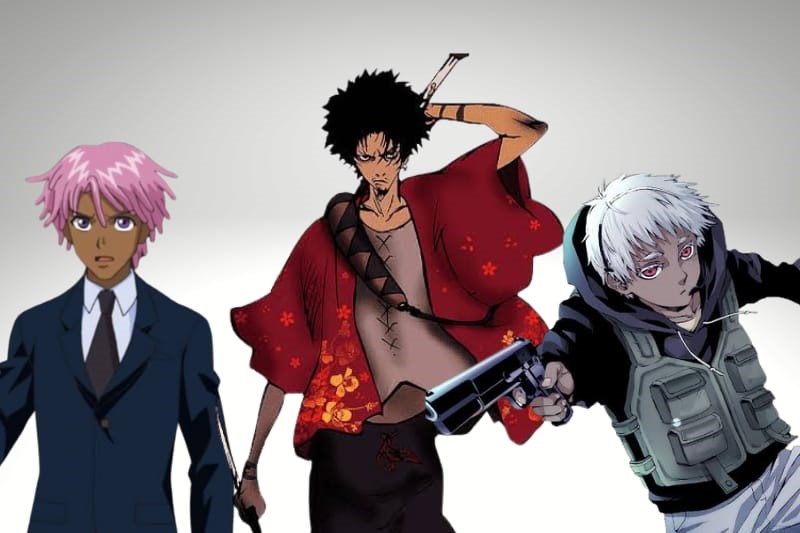 Every year, a large number of anime guys emerge in the huge world of anime. They were all too attractive, whether they had a fair or dark complexion. Despite their dark skin, black anime guys look so cool and fashionable.

The majority of them even had leading roles in their series. They also leave an indelible impression on fans’ hearts through their hotness and coolness. In this article, we talk about the 15 most handsome black anime guys.

So without any further delay, let’s get straight to this excellent list.

Dutch is the anti-hero in the Black Lagoon series and plays a significant role in the series. He is the captain of the Lagoon Company and has great control over his team members, including Revy, Rock, and Benny.

Dutch is an extremely tall and muscular, dark-skinned man. Before working for the Lagoon Company, he worked in the marine department of the US military.

Even though he is a balding man, he looks so attractive and cool. As a result, he is regarded as one of the most popular black anime guys.

Afro Samurai is the titular character of the popular sword anime series Afro Samurai. He is a slim yet strong young man with dark skin and an afro hairstyle.

His cold-hearted personality and exceptional swordsmanship skills make him one of the strongest black anime guys with swords.

Afro has only one goal in life, which is to avenge his father’s death. However, to take revenge, he has to become the world’s strongest samurai and acquire the title of “Number 1 headband.” Despite his clumsy look, he is an expert in hand-to-hand combat.

Mugen is one of the lead characters in the Samurai Champloo series. He’s a tall and attractive young man with dark skin and curly hair. He loves to show off, which is why he usually wears fashionable outfits, just like a rapper.

Mugen is also regarded as a womanizer due to his unusual yet hilarious incidents with women. His unpredictable swordsmanship skills and hunger to become better than Jin, the series’ main character, make him so popular.

Jet Black is one of the strongest bounty hunters in the Cowboy Bebop series. He is a huge and muscular young man with dark skin and a wonderful beard. He is also mostly recognized by his nickname, “Black Dog.”

Jet is an excellent leader and possesses good decisive skills. His calm personality and several years of experience allow him to face any difficult situation with ease.

Scar first appears as a villain in the Ishvalan Arc of the Fullmetal Alchemist series. However, later in the series, he became an ally of Elric’s brother and helped them find the Philosopher’s Stone.

Scar lives in an Ishvalan village where every person is born with dark skin and red eyes. He is a well-built young guy whose only goal is to kill every state alchemist until he meets the Elric Brothers.

Thanks to his brother’s alchemy hand, he is capable of killing anyone by just touching them with his right arm. Due to his major role in popular series, he is recognized as one of the most popular black anime guys.

Muhammad Avdol is one of the significant characters in Jojo’s Bizarre Adventure franchise. He is an Egyptian and shares an excellent brotherly bond with Joseph Joestar, the most popular Jojo in the franchise.

Avdol is a massive man with dark skin and deep tones. His wonderful dreadlock hairstyles and unique fashion sense set him apart from other popular black anime guys.

He not only looks stronger but also possesses incredible strength and magical abilities such as flame magic.

Kaname Tosen is one of the well-known villains in the Bleach series. He was the former captain of the Gotei 13’s 9th Division until he left the Soul Society. He is a tall, slim man with dark skin and beautiful braids.

Kaname always wears a white blindfold over his eyes because he was born blind. Despite being blind, he is an exceptionally strong swordsman and has defeated several powerful opponents.

Aside from his incredible swordsmanship skills, his spiritual power and Bankai are quite strong, which greatly aid him in fighting tough opponents.

Jonah, also known as Johnathan Mar, is the second main character in the Jormungand series. He is an attractive teenage boy with beautiful white hair and red eyes.

Due to his beautiful facial features and dark-toned skin, he is considered one of the most attractive black anime guys.

Jonah is a far more mature teenage boy in comparison to other teenagers. Due to witnessing his parents being killed in front of his eyes, he became a lonely individual. As a soldier, he is an expert at using all types of firearms and knives in combat.

Uub is a minor character in the Dragon Ball franchise. However, he plays a major role in Dragon Ball GT, one of the most popular series in the franchise. He is a teenage boy with dark skin and a very unique hairstyle.

Uub is the reincarnation of Majin Buu, the main villain of the Buu Saga in the Dragon Ball Z series. He is a very kind and good-hearted person, like Goku, which is why he can fly on Nimbus.

After being trained by Goku, he became a very powerful martial artist and has a very high potential to become as strong as Goku.

Charon is the guardian of the second pillar in the Fire Force series. He is an exceptionally tall and well-built man with dark skin and white hair.

Charon usually wears his martial arts outfit with a white blindfold featuring red symbols. He also can absorb any type of attack and use it against his opponents.

Andrew Gilbert Mills is one of the major characters in the Sword Art Online series. He is also trapped in the virtual world of Sword Art Online, along with 10,000 other players.

Andrew is a young balding and muscular man with dark skin and brown eyes. He runs a coffee shop alongside his wife, Trish, and lived a very happy life until he entered the game.

In the game, he shows his excellence in hand-to-hand combat and weapons combat. He is quite skilled at using two battle axes simultaneously against powerful opponents.

Darui is the ninja of Kumogakure village, the Land of Lightning. He is the fifth Lightning Shadow of his village and possesses incredible ninja skills and powerful chakras.

Darui is a young guy in the Naruto Shippuden series and has dark skin and beautiful white hair. He also served as one of the captains of the Shinobi force in the greatest war, the Fourth Shinobi World War.

Due to playing a major role in popular series, he is regarded as one of the most popular black anime guys.

Ogun Montgomery is the most significant member of Special Fire Force Company 4. He is a teenage boy with dark skin and beautiful orange eyes.

Ogun’s sole goal is to protect every single life in Tokyo, and he is willing to die to accomplish this. His most powerful ability, Flame Ink, allows him to withstand powerful opponents such as Tempe.

Kaz Kaan is one of the lead characters in the Neo Yokio series. He is an attractive young guy with dark skin and beautiful pink hair.

Kaan has a gentleman type of personality and also wears a wonderful suit like a businessman. Aside from his calm look, he is quite powerful and one of the strongest magic users in the series.

His beautiful pink hair and calm personality make him one of the most handsome black anime guys.

Ken Takagi is a minor character in the My Hero Academia series. He is one of the most well-known Pro heroes in the Hero Association, and his hero name is Lock Hero. He never hesitates to stake his own life for others, especially children.

Takagi is a dark-skinned man with curly hair and a confident personality. He wears a very stylish superhero costume and possesses a very powerful quirk named “Lock Down.”

We’ll wrap off this article by talking about every single black anime guy on the list. We compiled this incredible list based on their popularity and roles in their respective series. Each of them has quite attractive looks and wonderful personalities that you will certainly like.