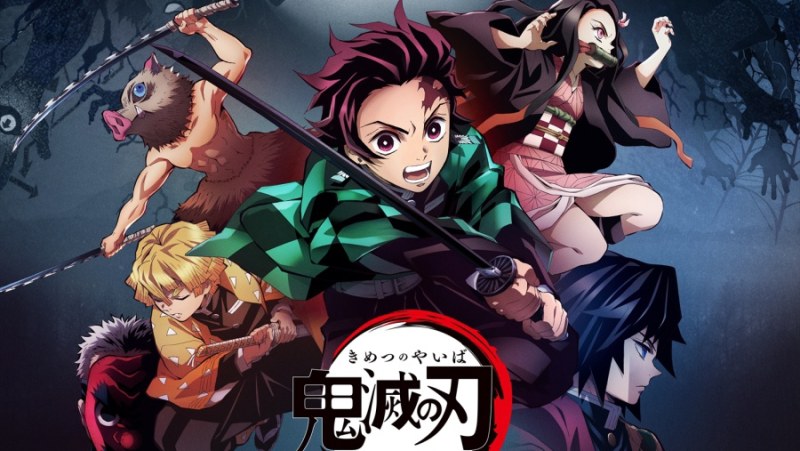 Notably of the hot topics in the anime world, Demon Slayer is sure to have topped all charts with all discussions centered on it.

The anime is primarily based on humanity’s struggle against the immortal demons by an organization called the Demon Slayer Corps.

Among the various queries that have emerged, fans have always demanded a ranked list of Top 10 Hottest Demon Slayer Male Characters.

So we have come again, this time with a detailed list for the ones who were awestruck by the exceptional physique of the characters. 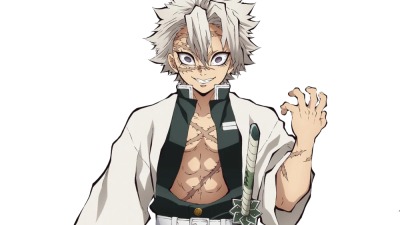 Sanemi’s tall and muscular build with his spiky hairs and scars make him one of the hottest characters.

However, his major drawback is his abrasive, impulsive nature and tendency to lash out, which has earned him the 10th position.

The hot-blooded, abrasive Wind Hashira, Sanemi Shinazugawa, is the number 10 on this list.

He is an extremely skilled and powerful combatant and has proven himself on several grounds. He took down several demons during the Infinity Castle Arc and even held his ground against the Upper-Rank One, Kokushibo.

Remember the man with a weird mask, always chasing Tanjiro for breaking his sword? Wondering how that artificial is up on this list, right?

Well, Hotaru’s face reveals the entire demon slayer fan base by surprise. His beautiful, charismatic face behind his weird ugly mask was the most unexpected and has gained him the 9th position on this list.

Hotaru was born in the swordsmith village and has been assigned the task of making Nichirin Swords for the Demon Slayer Corps. 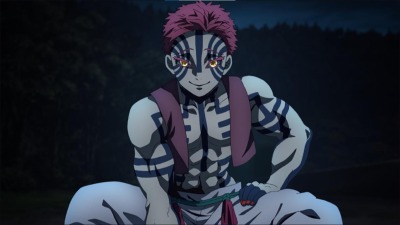 One of the primary antagonists in Demon Slayer, Akaza is undoubtedly one of the hottest demon slayer male characters.

The Upper-Rank Three’s tall stature with intense muscular build brings him to the 8th position on this list.

Despite being the demon who has taken down several Demon Slayers, including the Flame Hashira Kyojuro Rengoku, one cannot simply take their eye off Akaza’s body.

His carved muscular body, indomitable will, and battle spirit are astounding enough to bring him to this list. 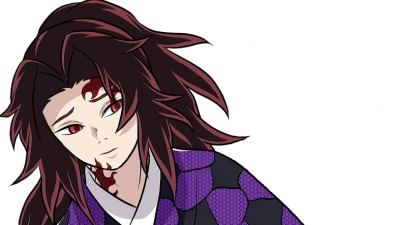 It’s time for the Upper-Rank One to be on this list of Hottest Demon Slayer Male Characters.

Kokushibo, who as a human went by the name Michikatsu Tsugikuni, is the current second strongest demon after Muzan himself.

His human appearance was the one that made him look more attractive. He was a very tall and muscular man with black and red hair. He was the elder brother to Yorichii, the strongest demon slayer to have ever existed.

To justify his position on the list, his hotness falls a bit short in correlation to the upcoming characters, thereby getting the 7th position. 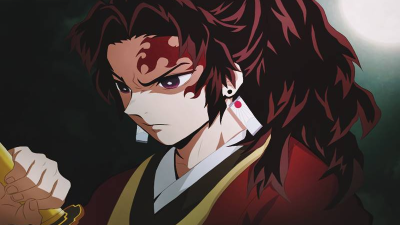 With the legendary Demon Slayer on this list, temperatures have already increased.

Known as the strongest demon slayer, who took down Muzan Kibutsuji in the blink of an eye, Yoriichi was the first developer of the breathing technique.

He’s tall, muscular yet slender, with wavy long black-red hairs tied to a ponytail, radiates immense strength and conviction, thereby making his position to no. 6 on this list of Hottest Demon Slayer Male Characters. 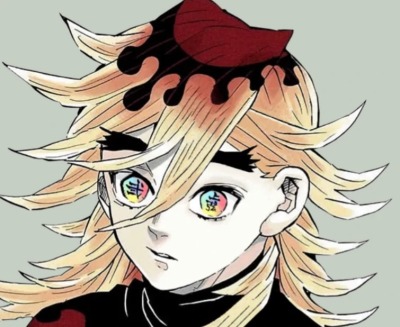 Doma, Upper Moon Two is indeed one of the hottest demons out there. His tall young figure with a moderately toned, muscular body gives us a glimpse of his fitness.

Doma’s apathetic face and casual nature are indeed one of the deadliest. The opponent gets no hint or idea as to what he is about to do next, thus making it intensively difficult to predict his attacks.

His blood demon art Cryokinesis is said to be one of the deadliest as is one of the major assets of the Demons.

Must Read- Akaza vs Doma: Is Akaza stronger than Doma in Demon Slayer? 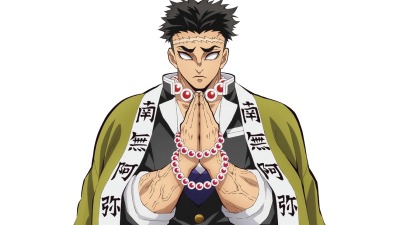 Finally, it’s time for the Hulk of the Demon Slayer Corps. Yes, as you have guessed it right, the Stone Hashira, Gyomei Himejima.

He is undoubtedly the tallest in the demon slayer and also the strongest of them all.

His powerful built and extremely muscular body, with spiked hairs and a scar that runs across his forehead, makes it difficult for anyone to take their eyes off him.

Gyomei’s role in defeating Muzan and the Upper-Rank One, Kokushibo is formidable and had it not been for him, the Demon Slayer Corps would have received a massive setback. 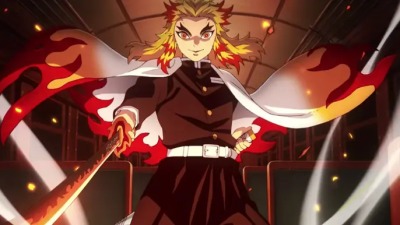 Here comes the Flame Hashira, Kyojuro Rengoku, to raise the temperature beyond the charts. Notably one of the strongest Demon Slayers, he has left a long, loved legacy of his own.

Kyojuro’s young athletic body with an optimistic aura, decorated by his all-time plastered enthusiastic smile and golden hair with red tips, undoubtedly distinguishes him from the general mass.

His always flashy attitude and enthusiastic voice are the most cherished of all. He is a fierce fighter with immense skills and willpower. His fight with the Upper-Rank Three is by far one of the finest action scenes in the anime world. 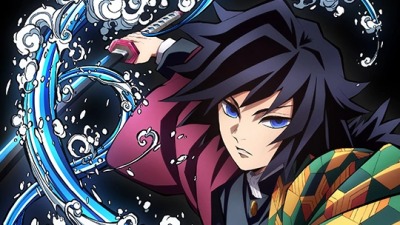 Giyu Tomioka is one of the hottest Demon Slayer male characters. For some of the fans, he is the most handsome male.

One of the most skilled combatants in the Demon Slayer Corps, Giyu is indeed one of the Strongest and Hottest Demon Slayer Male Characters.

His physical looks portray a tall man with a muscular yet slender stature, with an almost emotionless face.

His hairs of uneven lengths with a small messy ponytail behind coupled with his sharp eyes with deep iris all together bring him to the 2nd position in this list. 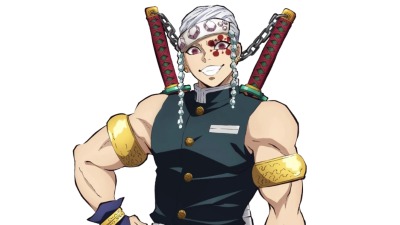 Finally, it’s time for the most awaited member on this list, the flamboyant, flashy, epitome of hotness Sound Hashira, Tengen Uzui.

Anyone who has watched or read Demon Slayer will agree with his position as the Hottest Male Character in one go.

His set of gold rings around his biceps and his sleeveless dress highlight every muscle tone to its core.

Tengen Uzui is one of the major supporting characters in the Entertainment District Arc, who fought head-on with the Lower Rank Six Gyutaro, where the latter’s defeat shook the pillars of the Demon world, adding a golden feather to the Demon Slayer Corps’s crown. 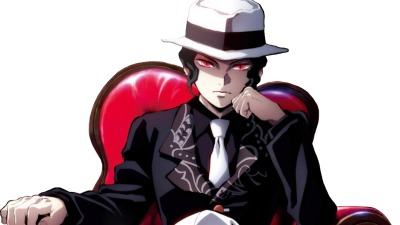 How can this list end without mentioning the fan-named Michael Jackson of the Demon Slayer series?

Muzan Kibutsuji, the King of Demons and the strongest of them all, deserves a special mention on our list.

Even as a demon, he is one of the most handsome characters with fairly muscular stature.

Muzan’s extravagant outfit with the white hat, as seen by Tanjiro when he confronted him for the first time, can make anyone fall for him.

Here we conclude this article. We intend to bring such exciting articles about several other anime, just for you guys. You can watch Demon Slayer anime on Netflix. Stay tuned.

Must Read- Tanjiro vs Muzan | Power Comparison in Demon Slayer (2022)