Skip to contentHome » Anime & Manga » Saitama vs Vegeta (Ultra Ego): Who would win? 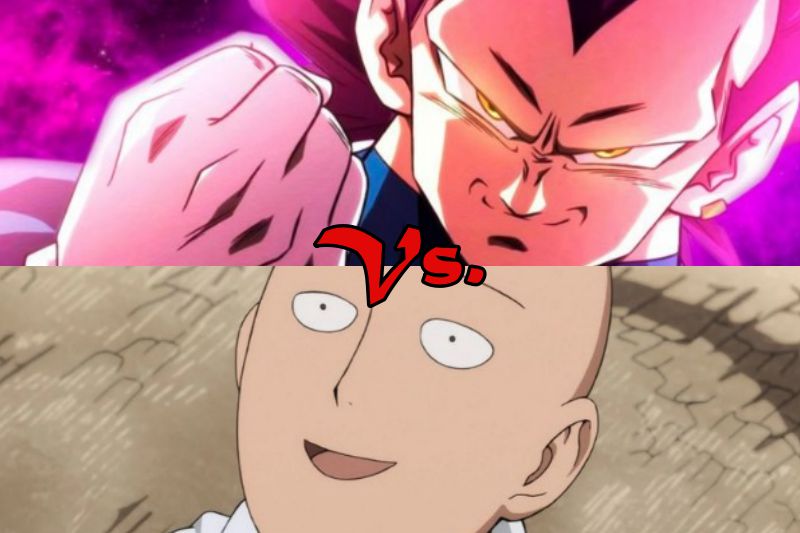 Speaking Saitama and Vegeta’s names in the same sentence should be blasphemous. They are both one of the most loved characters in their series. Saitama is the strongest in his series, and Vegeta is a close second in his own. So who would win in a Saitama vs Vegeta fight?

Don’t worry; we won’t leave you hanging. If Saitama vs Vegeta fight was to happen, Saitama would clearly be the victor. In contrast, Vegeta’s Ultra Ego help him grow stronger with every hit he receives. He would not be able to put up against Saitama’s unfathomable power.

It’s not like the fight will end with one punch! So hang on to the end of the article to find out why Vegeta would lose.

Saitama is the primary protagonist of the One Punch Man series. He is Genos’s mentor and the most misunderstood hero in the whole series. While he is the strongest hero in the world, No one within the story apart from a few seems to realise his strength.

As the name of the series suggests, he is the one-punch man who finishes most of his fights with one punch. Plagued by unlimited strength, Saitama has always wanted to fight where his opponents don’t get defeated easily. In this sense, if Saitama fought Vegeta, he would be amazed by his ability to take a punch.

Saitama is known as the Caped Baldy, who is the 39th Rank A class hero. Although the origin of his power is unknown, he claims that he received it by doing 100 sit-ups, pushed squats and running 10km a day.

He has been seen to defeat enemies like the awakened Garou, Boros and Orochi. Who none of the S-class heroes could touch.

Vegeta’s character growth is the most lauded in the dragon ball series. He was initially introduced as a villain when he invaded Earth with Nappa. But he soon came to call earth his home, marrying Bulma.

He fits the anti-hero archetype who fights not to protect but to enjoy it. He even went back to his supposed villainous ways when he donned the title of Majin Vegeta. But he has always had the interests of his family in mind. Helping earth’s mightiest heroes against threats like Cell and Majin Buu.

Vegeta is currently the deuteragonist of the Dragon Ball Super series. He has grown into a loving father who protects his loved ones. His help has been detrimental in fights against Toppo, Broly and Granola.

The latest addition to his arsenal of abilities has been Ultra Ego. This ability perfectly fits the Saiyan prince allowing him to grow stronger with every strike he receives.

Saitama vs Vegeta: Who Would Win?

Vegeta’s Ultra Ego, coupled with Hakai, should be enough to destroy planets with a single strike. But This may not prove too effective against Saitama, who has removed his limiter. The dearth of things that Saitama has not been hit with, be it portals or planets. Saitama’s invulnerability would allow him to easily receive any hits that Vegeta lands.

Saitama’s Omnidirectional Serious Punch, when used with his inhuman speed, won’t give vegetal time to think, dealing immense damage. However, there is a chance the Ultra Ego would absorb all this damage and convert it into power that can be used against Saitama. But as seen in the Granola Arc, there is a limit to how much damage Vegeta can take.

Vegeta’s energy blasts can become a problem for Saitama as he lacks any long-range attacks. But he can easily deflect the attacks back at Vegeta. Although the power ratings in the dragon ball franchise have gone haywire, raising it to insane levels. Vegeta can’t win against Saitama in a Saitama vs Vegeta fight.

Saitama would win the contest of strength as it knows no limits. Even though Vegeta will struggle to keep up with Saitama, his Saiyan blood and Ultra Ego will help him grow to the best of his abilities.

Saitama’s vulnerability is close to invincible. You can throw him into the sun and expect him to walk back as if nothing happened. Whereas Vegeta’s strong body can withstand blows, but it can’t protect him forever.

Saitama’s speed can only be countered by Vegeta’s instant transmission. But it will not pose a problem for Saitama as he would only need to adapt to his pattern.

Vegeta has more abilities than Saitama. He has a vast arsenal of transformations and techniques compared to Saitama’s serious punches and normal punches. But it is not the number of abilities but quality.

Saitama vs Vegeta would be a fight worth watching. It would be a fight between characters with undying fandoms. The prince of Saiyans would surely won’t go out in one punch! Here, we conclude our article. We will be back with more posts.