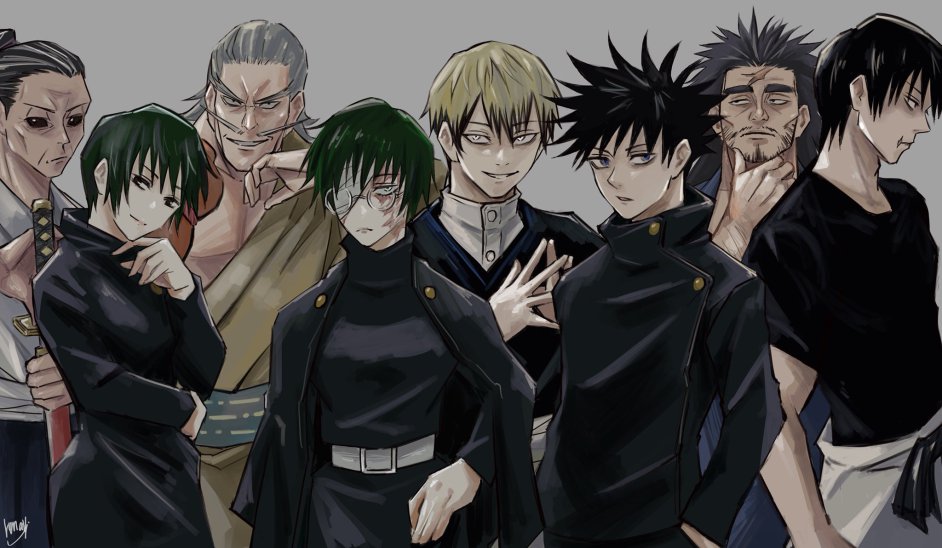 Jujutsu Kaisen is a supernatural dark-fantasy 2018 manga series written by Gege Akutami. The ongoing adventure manga plays on themes like cursed energy and cursed spirits. It currently has 149 chapters spread over 15 volumes and released the first season of its animation in 2020. It also has an upcoming movie that definitely has fans hyped.

The plot of this anime revolves around Itadori Yuji, a young high schooler who, after a series of unfortunate events, ends up becoming the vessel of an ancient curse. This curse is called the King of Curses, Sukuna, with whom he now shares possession of his body and risks the curse taking over. The cursed techniques of the characters used in this anime can be traced back to a history of strong vengeful spirits that later bifurcated and started their respective clans.

The three main clans mentioned in this series are the Gojo clan, the Zenin clan, and the Kamo clan. Each clan has a certain cursed technique that is passed down from generation to generation. Of course, these techniques main vary according to birth and genetics, but the members of these families always possess a higher amount of cursed energy. The most widely discussed clan in the series is the Zenin Clan which consists of a total of nine members who are actively involved in the plot and possess some sort of cursed power.

Mai Zenin is one of the younger generations of the clan and is a grade 3 sorcerer. Her cursed technique is that of construction in which she can use cursed energy to produce tiny items. She specializes in using firearms, especially handguns and rifles with impeccable aim, and uses rubber bullets that are imbued with cursed energy. And since she possesses a limited amount of cursed energy due to her being a twin, she faces an immense amount of backlash when she uses her technique. Further, it is her weak physical skill and limited productivity of her cursed technique that makes her the clan’s weakest member.

Ogi Zenin is the father of the two girl twins and the second eldest in the clan. He is a special grade 1 sorcerer and specializes in using his katana imbued with cursed energy. Having a special talent in jujutsu he has the ability to use secret barrier techniques. His cursed technique, Blazing Courage, allows him to eject frame from his katana. In the recent chapters of the manga, he also revealed to us that he was able to use the secret art and the anti-domain barrier technique called the Falling Blossom Emotions.

Jinichi Zenin is a high-ranking member of the Zenin Clan and a special grade 1 sorcerer. He is the eldest son of the Zenin family and is characterized by an x shaped scar on his forehead. Although he hasn’t yet appeared much in the manga or displayed his cursed technique we are led to believe that his skills surpass those of Ogi Zenin.

Maki is the other twin of the Zenin family. In most jujutsu families twins are considered a bad omen due to the distribution of powers and abilities in the womb. Due to a Heavenly Restriction placed on Maki since birth, she lacks the abundance of cursed energy that the clan possesses but makes up for it with her physical abilities. She is a master of weapons and although she is forced to maintain the position of a grade 4 sorcerer and uses glasses to see cursed spirits, she can easily exercise grade 2 cursed spirit with cursed tools. Especially in the recent chapters with the surprising event that took place, she is projected to display skills on par with Toji Fushiguro.

Naobito Zenin was the head of the Zenin clan and a special grade 1 sorcerer who inherited the Zenin clan’s Projection Sorcery. His cursed technique allows him to turn one second into 24 frames which grants him the ability to predetermine his opponent’s movements. The only condition which applies to this technique is that he must have some contact with his opponent in order for this technique to work. If no contact is established, the opponent freezes for 1 second. Naobito played a huge role in the Shibuya Arc while battling the special grade cursed spirit. He also displayed his ability of the secret art and anti-domain technique Falling Blossom Emotions.

Navya is the son of Naobito and was supposed to be the heir to the clan however due to certain circumstances, he was not made the head of the clan. In the manga, he is said to be stronger than most clan members and is a special grade 1 sorcerer. Like his father, he too possesses the cursed technique of projection sorcery. However, he also relies on the use of his cunning attitude, quick thinking skills, and weapons during his fights.

Toji Fushiguro is the disowned son of Junichi Zenin and is a non-curse user due to Heavenly Restriction. He’s a unique case of Heavenly Restriction as he was completely drained of cursed energy but was left with impeccably elite physical abilities. He’s also known as the infamous assassin called the Sorcerer Killer and is able to defeat special grade jujutsu users without any cursed techniques. He also has a cursed spirit that accompanies him and stores his cursed and non-cursed tools that help in sneak attacks. Due to his nonexistent cursed energy, he is able to easily sneak past barriers. Especially in the Shibuya Arc, he was able to easily overwrite Granny Ogami’s soul summoning information during his resurrection.

Must Read- (2021) Power of Toji Fushiguro in Jujutsu Kaisen Explained

Megumi Fushiguro is the son of Toji and was abandoned by him at a very young age. Due to this, he was left to grow under the guidance of Gojo Satoru. After joining the jujutsu high school, he was able to gain access to guidance for his cursed power. After learning much about the art of jujutsu from the strongest sorcerer- Gojo Satoru himself, and being trained by Maki in physical combat, he now possesses commendable combat skills. The ten shadows cursed technique that he inherited from the Zenin Clan allows him to summon any ten shadows he exorcises. He is also able to summon ancient curse Divine General Mahoraga (which can only be defeated either by Gojo or Sukuna), provided he puts his life on the line. The fact that he has been handpicked by the King of Curses for his technique and future potential further cements his place as the strongest member of the Zenin family.

Since the manga is currently ongoing, it is important to note that there is a wide scope for the enhancement of the abilities and techniques of the younger generation. Maki, Naoya, and Megumi, especially have a lot of room for growth, and their techniques, skills, and powers will definitely age like fine wine. Well, we’ll be back with yet another article that’ll help you rank, discuss, and enjoy each series in detail very soon. So until then, stay tuned, stay safe and stay hyped.