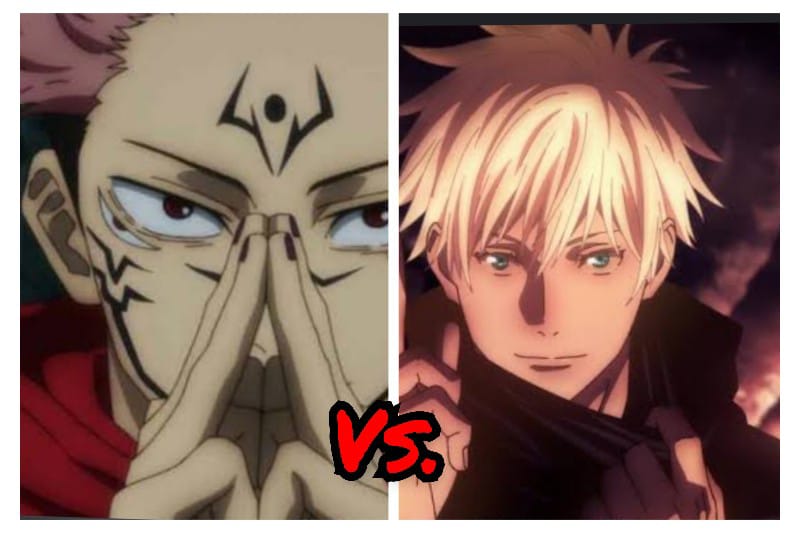 This article is updated based on the current manga chapter.

Jujutsu Kaisen series has entered into the Culling Game arc, where we are going to witness the entrance of more magnificent players.

Maybe we will get someone who is powerful enough to challenge either Sukuna or Gojo. Don’t worry; we are not spoiling anime fans more.

In this post, we will discuss the power comparison between Satoru Gojo and Ryomen Sukuna in Jujutsu Kaisen.

At the beginning of the series, there was a small clash between Ryomen Sukuna (with 1 finger) and Satoru Gojo, where Gojo totally overwhelmed him.

After that, Gojo is confident in himself that he will defeat him in the future also. 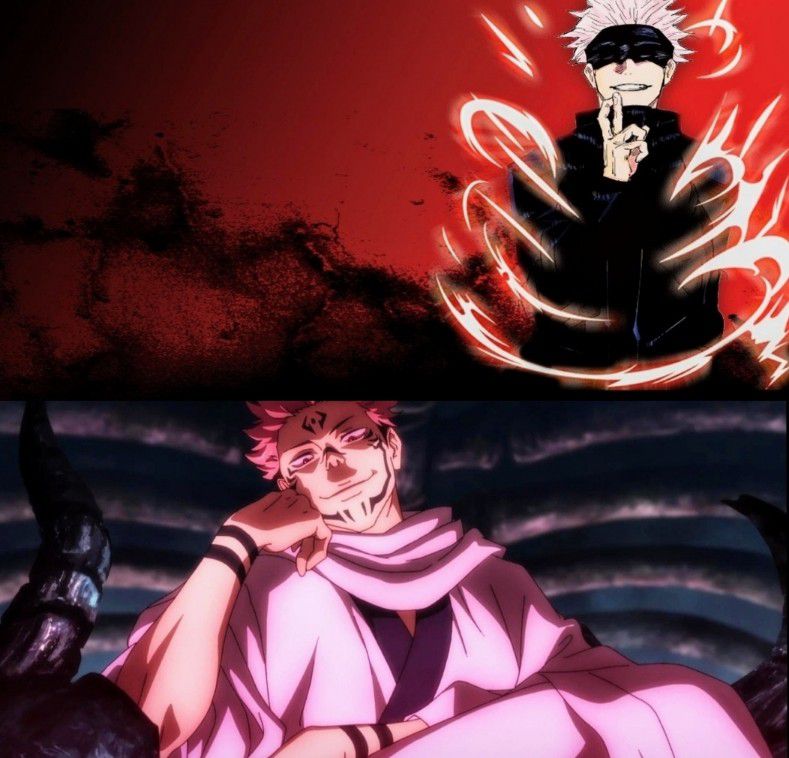 On the other hand, Ryomen Sukuna, who is known as the King of Curses, noticed that he is the Six Eyes of the known Gojo Family.

That is why he challenged Gojo to fight with him once he gained the cursed power of 20 fingers.

Jujutsu Kaisen manga series has unveiled the curse power, techniques, and domain expansion of both Satoru Gojo and Ryomen Sukuna.

And based on these factors and fans’ theories, we will compare them (Gojo vs Sukuna).

Note: This article is updated based on the current manga chapter.

Currently, Sukuna has gained the cursed power of 15 fingers. With this, he has surpassed all Special Grade Cursed Spirits and High-rank Jujutsu sorcerers.

He exorcised even an Ancient Shikigami, Eight-Handled Sword Divergent Sila Divine General Mahoraga, who was specially summoned in the ritual to eliminate his opponent.

On the other hand, remaining all Special Grade Cursed Spirits planned and clashed together just to seal one person, i.e., Satoru Gojo.

They know that even their combined strength cannot overpower Gojo’s Cursed energy. So, they sacrificed themselves just to seal him. 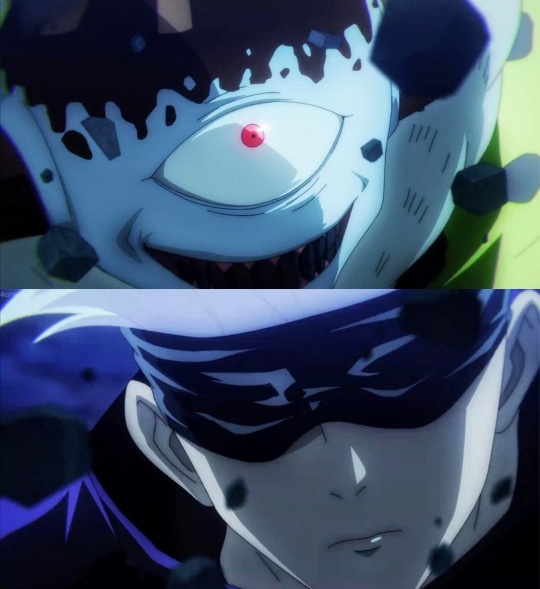 Satoru Gojo is also the protagonist of the series. He is the strongest sorcerer holding both an immense amount of Cursed Energy and powerful techniques like reverse cursed techniques and black flash.

During his fight with Jogo, he showed his overwhelming raw strength, great speed, reflexes, and durability.

He has possessed Immense Cursed energy, which allows him to use his Domain Expansion multiple times a day.

In contrast to the other sorcerers who can only activate it once a day. Also his, Limitless Cursed Energy is inherited from his clan, the Gojo Family.

From his Clan’s bloodline, he obtains the Cursed Energy to manipulate the surroundings’ speed at the atomic level.

Besides all of these, he is the one who was born with the ability of Six Eyes. It means he has an infinite amount of cursed energy and has no blindspot.

Infinity is the Cursed Technique that Satoru Gojo used many times. It allows him to form a barrier around himself where the opponent’s movement becomes slower and slower.

This Infinity barrier follows the Paradox of disambiguation where the opponent’s speed becomes equal to the speed of the tortoise.

His Cursed Technique, Limitless, is divided into two categories, i.e., “Convergence” and “Divergence.”

The Convergence Cursed Technique- ‘Blue’ permits him to attract the atoms of the surroundings like a black hole.

Whereas the Divergence Cursed Technique- ‘Red’ is the inversion of the Blue. It grants him the ability to repel everything nearby violently like Big Bang.

By combining these two techniques, Satoru Gojo performs the Hollow Purple technique, creating a singularity that effectively erases or deletes everything in his path.

Ryomen Sukuna is the antagonist and an extremely powerful Cursed Spirit of the Jujutsu Kaisen series. He is described as a demon with 4 arms and 2 heads.

If we talk about the Cursed Power, then Sukuna also possessed a vast amount of Cursed Energy.

Based on Strength, Sukuna has the upper hand over Gojo, but in terms of speed and reflexes, I think Gojo can surpass him.

Also, both Sukuna and Gojo know Reversal Cursed Technique, which allows him to heal themselves; however, Sukuna has the advantage of Incarnation grants him to grow body parts, limbs, mouth, etc.

The series has shown Sukuna’s limited Cursed Techniques. Maximum times, he only used his raw strength and speed to play with his opponent.

One of his primary Cursed Technique is Slashing Technique. It allows him to change his Cursed Energy into slashing attacks.

His Innate Cursed Technique is divided into two styles, Dismantle and Cleave.

It is basically a slashing attack that adjusts itself according to the opponent’s cursed energy and toughness. In short, he can cut or slice anything in one move.

Also, being the King of Curses, he has the knowledge of every cursed energy and binding vows.

He even used an unnamed fire ability against Jogo that even overtook the destructive fire. It reveals that he can perform more than just slashing or cleaving.

Must Read- (2022) Power of Sukuna Explained in Jujutsu Kaisen | Updated

As discussed earlier, based on strength, Sukuna has the upper hand, but in terms of reflexes and speed, Gojo may have the supremacy.

If we compare the durability, on one side, Satoru Gojo has the Infinity Cursed Technique, which allows him to form an invisible barrier that works on the paradox of Achilles and the tortoise.

And on the other side, Sukuna is the master of the Reversal Cursed Technique and Incarnation, which allows him to instant regenerate his body parts. So, it isn’t easy to compare both of them based on durability.

Satoru Gojo has the Infinity and Limitless Cursed Technique, which allows him to control the atoms of his surrounding like a Black Hole or Big Bang.

Also, he can combine his technique to form a singularity to erase the existence of the matters.

But the best part is he is born with the ability of Six Eyes, granting him the power to use his cursed technique at infinite times without getting exhausted.

On the contrary, Sukuna, the King of Curses, has the Dismantle and Cleave Cursed Technique that allows him to slash anything, only just the movements of his fingers.

The finest part is his Cleave technique changes according to the opponent’s cursed energy and toughness. He also has a vast amount of cursed energy but not infinite.

In this case, we are not sure whether Sukuna’s slashing technique works in the Infinity barrier.

So, in my opinion, Satoru Gojo has dominance over Sukuna based on Cursed Techniques.

But remember, Sukuna has more than one cursed technique, and he has the advantage of regeneration. Therefore, anything may be possible.

Based on Domain Expansion-

Jujutsu Kaisen manga has displayed the domain expansion of both Sukuna and Gojo. They both can create a domain multiple times a day.

Satoru Gojo can create a territorial expansion of Unlimited Void. In this endless void, the opponent can apparently feel and see everything.

Gojo can put his opponent into a hallucination where they think his domain into a never-ending territory.

On the contrary, Sukuna’s Domain Expansion, Malevolent Shrine is the most unique and powerful one. His territory creates a Buddhist shrine that covers the surrounding area with blood.

His expansion is the only domain that doesn’t create a separate barrier from the outside world. It means anyone can leave or join Sukuna in his territory.

But instead of a barrier, a binding vow is formed between Sukuna and his opponent, vastly increasing the guaranteed hit’s effective area.

Inside his domain, any matter is cleaved by Sukuna, and it depends on the target’s toughness and cursed energy level.

He can construct his domain up to a maximum radius of 200 meters and can manipulate it.

According to Gojo, the powerful domain can suppress the lower one. Therefore as per fans’ theories, Sukuna’s Domain Expansion is more dominant than Gojo’s Unlimited Void.