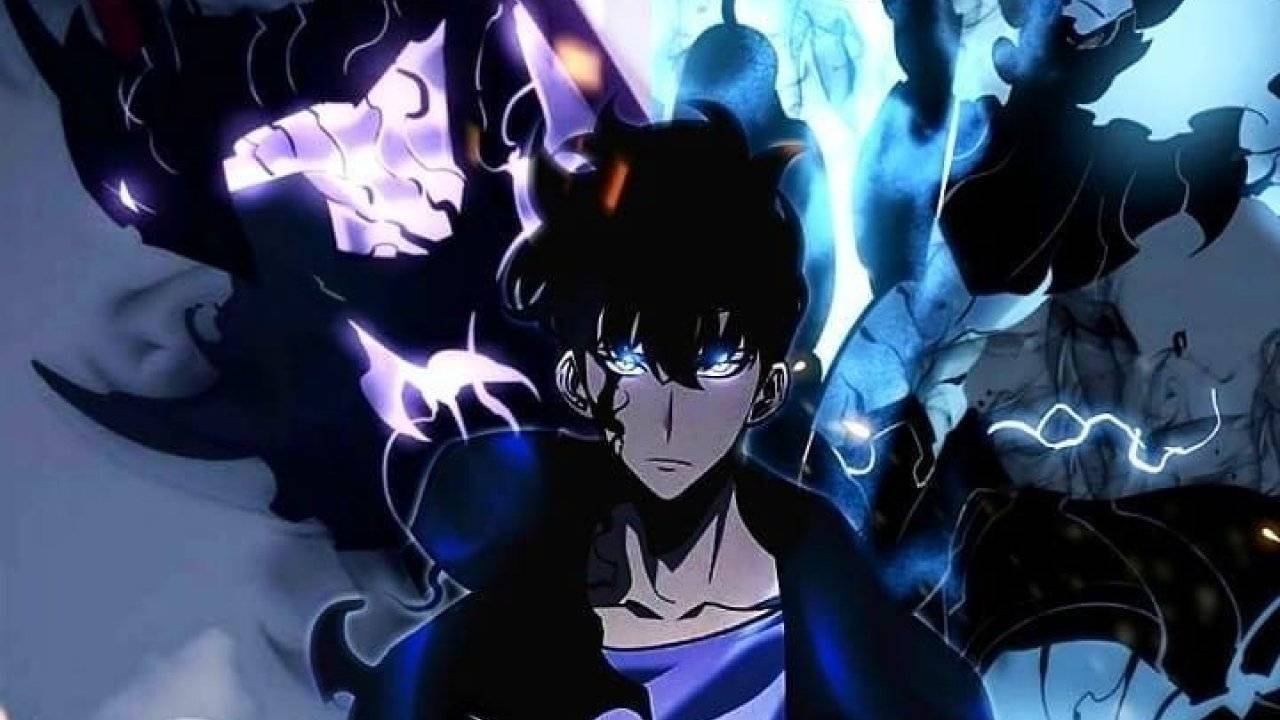 Kindly note that this article will include spoilers from the I Alone Level Up novel. Solo Leveling fans are therefore requested to proceed with caution.

The Solo Leveling series is based on the web novel titled I Alone Level Up. It began its illustration in 2016 and has since then risen to popularity. This popularity is, of course, due to its impeccable plot and art by Chugong.

After barriers between dimensions are broken, monsters soon gain access to the human world. It is around this time that humans with superhuman powers rise to protect the weak. However, this is not all the story has to offer.

The protagonist Sung Jin-Woo after gaining access to a power-up system, soon is faced with many more difficulties. But as he realizes the meaning and importance of this power, he sure does it all and then some more.

The story actually begins with the Absolute Being and his cruel intentions for the Rulers and Monarchs. But when the Rulers take matters into their own hands, there is a loyal betrayer who switches sides.

So as the war between the two begins, humankind is pulled into the center of destruction. And so, our protagonist shows us how he uses, defeats, and enhances the system to literally save the world.

Naturally, this is an action-packed series that’ll leave you clinging to the edge of your seat. So without any further ado, let’s get into the Top 20 Strongest Solo Leveling Characters Ranked.

Warning, Spoilers Alert. The ranking is done based on Solo Leveling Light Novel.

The Architect was the hidden Boss of the Double Dungeon.

It is most probably the smartest character in this Solo Leveling series.

The Architect created and managed the system to match, upgrade, and benefit Sung Jin Woo. It also practices puppet manipulation and is able to control statues.

Furthermore, it also possesses Ruler’s Authority, in which it can telekinetically control weapons and other objects.

Is the second strongest hunter in the world and is dubbed as the Chinese Hero.

Like most National level Hunters, he is a vessel of a Ruler.

Therefore he possesses Spiritual Body Manifestation and the power of Rulers Hands. Along with his telepathic abilities, he also wields 2 long swords.

Furthermore, he also has a huge presence in terms of mana that can be detected and sensed by all Hunters.

Thomas Andre is the strongest hunter in the world.

As a tanker, his attacks and defenses are focused on raw strength. He too is Ruler’s vessel and possesses Spiritual Body Manifestation.

He has fought both Sung Jin Woo and the monarch of beastly fangs. And in both battles, he displayed an impressive amount of strength and attack power.

The monarch of plagues, Querehsha, is also known as a Queen of insects.

She specializes in poisons, regeneration, and Spiritual Body Manifestation.

She mainly uses insects as replaceable armor for defense. The queen of insects also practices necromancy and uses brain parasites to control the Dead.

Lastly, she can also use mana to form hands out of energy that can be controlled telepathically. These hand-like extensions have a good attack range.

Kamish is a dragon regarded to be humanity’s greatest calamity.

The dragon first emerged from an S-Rank Gate in America. Kamish’s signature move is Dragon’s Breath which allows them to spout fire from their mouth. These flames are capable of burning anything to the cinders.

Kamish also possesses Dragon’s Fear which is later used by Sung Jin-Woo against Antares. Dragon’s Fear releases a mana-infused scream from the Dragon’s souls that sends those weaker than themselves into despair and panic.

Igris the Marshal Grade knight is the shadow of the Blood-Red Commander, Igris.

He is known to be one of the two wings of the Shadow Army and the Knight of Destruction.

Igris was originally under the direct command of the original Monarch of Shadows and is therefore well-versed in battle.

He uses a long sword and can even use Dominator’s Touch to match and enhance his precise swordsmanship.

Beru is the Marshal Grade general shadow of the Ant King from the Jeju Island Arc.

As the Ant King, he is Sung Jin Woo’s strongest personal shadow.

He was the first to break out of the monarch of frost’s ice prison and even possesses wings that allow flight. Furthermore, he is also very smart, practices size manipulation, and can release paralysis poison.

The poison Beru produces is much more potent and toxic than that produced by the Ant King. Beru also practices healing magic that can be used on himself and others.

The Rulers are beings born from the World Tree.

They are heavenly beings that resemble angels, with six wings and armor.

There are a total of 8 Rulers who are very powerful as 7 of them eliminated the Absolute Being. These Rulers can bestow powers upon humans.

When humans absorb enough of their power they can even become vessels for possession. Furthermore, they also have the and ability called Ruler’s Hands that grants them telekinetic powers.

This Monarch is also known as the King of Demonic Specters and the Greatest Sorcerer in the Chaos World.

Like most Monarchs, he practices existence erasure that sends beings directly into the void.

According to the novel, he is one of the Monarchs that gave Sung Jin-Woo the most trouble. And although it is not specified how, it is most likely through enhancing the soldiers’ powers through his magic.

The Monarch of White Flames was also known as the Demon King.

He was defeated by Ashborn in their fight.  He had the ability to summon a demon army called Hell’s Army through portals.

He can also manipulate lightning through his breath. Lightning breath was used in long-range and close-range combat and easily debuffed his opponent.

The Monarch of Iron Body is known as the King of Monsterous Humanoids.

In the light novel, he seemed to help Antares with his army.

He most likely has the ability to control and direct beings of the Chaos World. Furthermore, he seemed to have connections to Tusk and many other Chaos world beings. This Monarch also practices existence erasure.

The Monarch of the Beginning is also known as the King of the Giants.

He was used as a buffer for Mana reinforcement between the worlds after being captured by the Rulers.

Being a giant, he possesses an immense amount of strength that he managed to showcase even while restrained. He also specializes in spell casting and managed to cast the Pledge of Trust with Sung Jin Woo.

Bellion is the Grand Marshal of Ashborn’s shadow army and the strongest shadow in existence.

He wields a centipede-shaped sword that extends and can be controlled telepathically.

He is born of the World Tree that gave rise to all heavenly beings. Furthermore, he is skilled in battle and has quick reflexes and sharp senses.

Sung Il Hwan is the father of Sung Jin Woo and was trapped between dimensions where he met the Rulers.

Here he later became the vessel for the Fragment of Brilliant Light.

In the light novel, he managed to hold the monarch of Frost long enough for Sung Jin Woo to recover. The reason why he ranks so low is that although persistent in terms of strength, he is vulnerable to mana attacks, especially from a Monarch.

The Monarch of Beastly Fangs is titled the King of Beasts and the Greatest Hunter in the Chaos World.

He is mostly known as a coward who knows when to run away from a battle. However, his attacks are purely strength-based and he does not practice many direct mana attacks.

The Monarch of Frost is King of Snow folk.

He is an Ice Elf who has Ice Magic. Therefore he can summon and order around ice golems.

His attacks mostly consist of ice spears and arrows that are imbued with mana. He also has the ability to restrict and restrain beings in an ice prison. Furthermore, with a breath, he can freeze other beings at sub-zero temperatures.

Related- (2021) Power of all Monarchs in Solo Leveling: Strongest Monarch

Antares is also known as the King of Berserk Dragons.

Spiritual Body Manifestation transforms his body into a dragon that is far greater than Kamish.

Antares also practices the Breath of Destruction which ensures complete erasure of an opponent. Another attack is Dragon’s Fear which is 10 times stronger than that of Kamish. Furthermore, he also practices telepathy and spatial manipulation.

Ashborn was originally the strongest Ruler known as the Greatest Fragment of Brilliant Light.

He later betrayed the Rulers to become the Monarch of Shadows where he became known as the King of Shadows.

He is one of the strongest characters in the Solo Leveling series. As a Ruler, he is able to bestow power upon people and he chose Sung Jin Woo. However, as a Monarch, he practices Shadow Extraction and Preservation and can even buff his shadows to increase their power.

Sung Jin Woo is the current Monarch of Shadows and the strongest unofficial Hunter in the world.

He is a vessel of the former Ruler and Shadow sovereign Ashborn. Thus he possesses a wide range of abilities. He has an army of over 200 thousand shadow soldiers. And he is also immune to poison and it has the ability to enhance his speed, reflexes, attack power, and strength.

As the current Monarch of Shadows, he also practices Shadow Extraction and Exchange, Dragons Fear, and Rulers Authority.

The absolute being is the creator of the Rulers and the Monarchs.

He possesses absolute power over everything. However, he’s a cruel being who although served by the Rulers makes them fight the Monarchs for entertainment.

As he can create life out of nothing, he can also return it to nothingness. He is noted to be stronger than Ashborn and Antares. However, he was murdered by the seven Rulers who attacked him together.

With this, we conclude with our article on the Top 20 Strongest Solo Leveling Characters Ranked. We hope that you’ve enjoyed our ranking of the characters of the I Alone Level Up novel.

Q1. Who is the strongest character in Solo Leveling?

Ans – The Absolute Being is the Strongest Character in Solo Leveling.

Q2. Who is the strongest Monarch in Solo Leveling?

Ans – Ashborn, the previous Monarch of Shadows was the strongest Monarch. However, he now passes on the titles to Sung Jin Woo.

Q3. Who is the strongest shadow of Sung Jin Woo in solo leveling?

Ans – Bellion is the strongest shadow of Sung Jin Woo in Solo Leveling.

Q4. Who is Antares in Solo Leveling?

Ans – Antares is the Monarch of Destruction in Solo Leveling.

Ans – The Rulers are heavenly beings created by the Absolute Being to ensure peace and fight the Monarchs.

Q6. Who are Monarchs?

Ans – The Monarchs are monstrous beings of the Chaos World who are created by the Absolute Being to cause destruction.

Well, that’s it from our article of the Top 20 Strongest Solo Leveling Characters Ranked. We’ll be back with more Solo Leveling content, especially spoiler articles so until then, stay safe, stay tuned, and stay hyped.