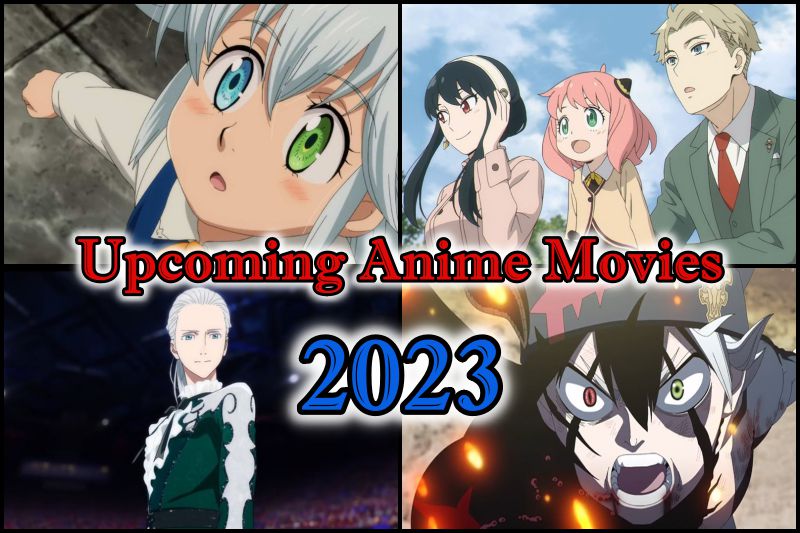 Anime releases dominate the calendar throughout the year. We patiently wait for something as small as a poster to drop so that we can comfort ourselves that our favorite show is returning. But sometimes, they go a step forward; they drop movies! So here’s a list of 13 Upcoming Anime Movies releasing in 2023.

If you are looking for the most anticipated upcoming anime movies, then this list is for you. But don’t worry, we’ll list out some more movies that come out next year too!!

Doraemon Movie 42: Nobita to Sora no Utopia will be the 42nd feature-length film in the franchise. The website for the film has teased the audience with a small trailer for the adventure to come.

In this edition of the film, Nobita and the gang will visit a perfect world known as ‘Utopia .’A place in the sky where everyone lives joyfully. The trailer teases us with an article about a mysterious object flying over the savanna, laying the intrigue for the film.

Takumi Doyama will serve as the director of the film. Ryota Kosawa from the great pretender will join him as the screenwriter.

2) My Next Life as a Villainess All Routes Lead to Doom! Movie

Otome Game no Hametsu Flag Shika Nai Akuyaku Reijou ni Tensei shiteshimatta revolves around the life of a young girl who reincarnates as a villainess in a video game. Adamant to not lose to her fate she decides to changes that will help her survive.

Otome Game announced its film in September 2021. This was a month after the second season ended, teasing the audience with glimpses of the story to come. Not much is known about the film other than Uchida, Maaya reprising her role as the titular character.

Detective Conan is an anime that we’ve all grown up with. The mystery, the action, and the thrill of finding ‘whodunit?’. Kurogane no Submarine is the 26th feature-length film in the franchise. Set near the sea of Hachijo-Jima island.

It’s a secret facility where engineers from all around the world are trying to create a new technology for facial recognition. Conan inexplicably gets tangled in these events when he receives a phone call informing him of a Europol employee getting murdered by Jin.

Yuzuru Tachikawa will serve as the director for the film, joined by Takeharu Sakurai as the screenwriter.

The grudge of Edinburgh is one of the most anticipated upcoming anime movies after its first part was released on December 20, 2022, on Netflix. The film carries on the legacy of the seven deadly sins and acts as a bridge between its soon-releasing sequel.

The film will feature an original story about Tristian. It covers his struggle to control his holy and demonic powers. A new challenge faces our new heir when Elizabeth’s life is threatened. Will Tristian find answers to the question at Edinburgh??

The film will be directed by Bob Shirahata, with Noriyuki Abe as the supervising director. Alfred Imageworks and Marvy Jack are in charge of animation. Kohta Yamamoto and Hiroyuki Sawano will be responsible for the music in the film.

Psycho Pass has been making waves in the psychological thriller genre ever since its release in 2012. The original series pulled up many philosophical debates about what makes a criminal and how society runs.

The story has spiraled outward, expanding its world with new characters joining every season. Psycho-Pass Providence was announced during the 10th anniversary of the series. It went into production in October.

The film will be set in a time before the third season and feature Atsushi Shindo. It will give insights into his relationship with his son Arata Shindo.

Puella Magi Madoka has been a deceptive anime. Its cutely designed visuals and characters give off a feel of a traditional magical girl series. We find its dark themes when we dive deep into the series.

Walpurgis no Kaiten will be a sequel to Puella Magi Madoka Magica The Movie Part 3: Rebellion. It will feature an all-new story with our favorite characters in stow.

Akiyuki Simbo will serve as the director for the project, and Gen Urobuchi will join him as the screenwriter. Yuki Kajiura, well-known for her compositions for the Demon Slayer series, Black Butler series, and music for the Sword Art Online series, will compose music for the film.

Release Date: US release in February 2023

Sword Art Online, the Movie -Progressive- Scherzo of Deep Night, was released originally in October 2022. But didn’t see an international release. The film retells the story of the Aincrad Arc and gives us new instances of the defining arc for the franchise.

The film will hit theatres across the globe in February. A1 Pictures produces the film with Ayako Kono as its director. Kono is well known for his work in Ace Attorney, After the Rain, and Your Lie in April.

8) Overlord the Movie: The Holy Kingdom

Overlord has been a fan favorite for the audience that loves animes with OP MCs. Its popularity demands its place on the list of 13 most anticipated upcoming anime movies.

The Holy kingdom will be set between the 7th and 8th episodes of season 4. It will feature a story from The Paladin of the Sacred Kingdom Arc of the light novel.

As a part of the canon story, it will help fill the gaps from the fourth season, offering deeper insights into the story.

Yuri on Ice has been an era-defining, award-winning anime. The series has portrayed one of the most realistic boy love relationships in the whole anime industry. It is held in high esteem in the sports genre along with the likes of Haikyuu!! And Kuroko’s Basketball.

Ice Adolescence was set to be released in 2020 but got pushed further due to the COVID-19 pandemic. The film was written by the original creators, Mitsurou Kubo and Sayo Yamamato.

Kubo is also working on the character designs for the film. Kenji Miyamoto will return as the choreographer for all the ice skating segments.

Black Clover was a hit as soon as it was released. Its popularity places it in the big 3 of its time. The first film details were announced at Jump Festa 2023.

The upcoming movie will see Asta and the rest of the characters fight against former wizard kings. The imperial sword revives the previous wizard king as he wreaks havoc across the world.

Will they be able to hold up against former rulers of the magic world??

Animes like Digimon have defined our childhoods. So much so that the franchise brought back its original characters with the Digimon Tri-series.

Set in February 2012, Digimon Adventure 02 The Beginning will serve as a sequel to Digimon Adventure: Last Evolution Kizuna. The events of the film will occur a little after the Digimon Tri-series and see characters like Daisuke Motomiya, Ken Ichijōji, Hawkmon, and V-Mon return.

The upcoming film will add new characters, with Megumi Ogata as Rui Ōwada and Rie Kugimiya as Ukkomon. Tomohisa Taguchi of Twin Star Exorcist fame will serve as the director, with Akatsuki Yamatoya as the screenwriter.

Spy x Family hit the top charts for 2022 soon after it was released. We, as an audience, couldn’t handle Anya’s cuteness and waited for her to say her signature, ‘Waku Waku.’

The story of Twilight, who creates a fake family to prevent a war between the east and the west, has been more than a simple spy thriller. It has cuteness, comedy, and a whole lot of drama.

Fans were elated when a second season and an original movie were announced at Jump Festa 2023. Tatsuya Endo, the original creator of the series, is working on the character designs for this new film.

Release Date: February 2023 in the US

Kaguya-Sama: Love is war is one of the most anticipated animes of the current decade. The film will cover the fourteenth arc of the manga. Fans can’t wait to know what’s in store for their favorite characters now that Shirogane has confessed to Shinomiya. This tension and suspense thrust the film to our list of upcoming anime movies.

What will our characters do now that they’ve had their first kiss?

Now that 2022 is coming to an end, we look forward to what the anime industry has to offer for the upcoming year. We can’t wait to rush to the theatres to watch the most anticipated upcoming anime movies of 2023.