Skip to contentHome » Anime & Manga » My Hero Academia » Prime All Might vs Shigaraki (AFO): Who would win? 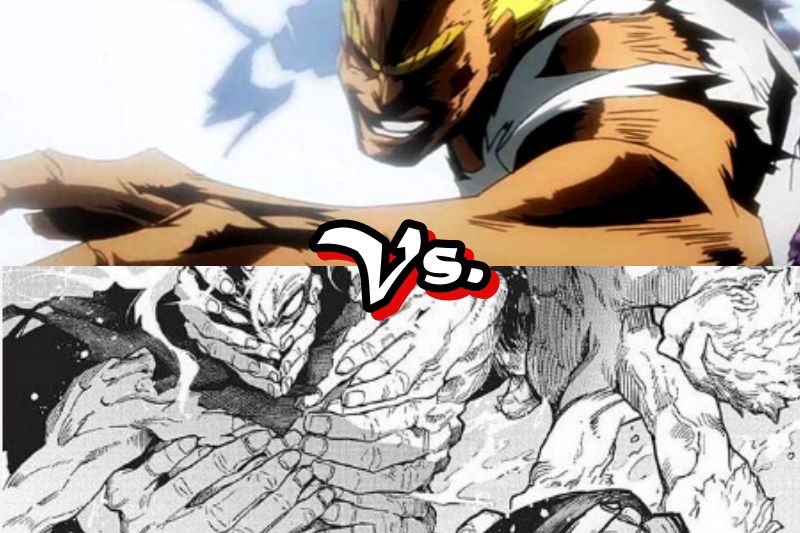 The latest season of My Hero Academia is unraveling into a real nail-biter. All our heroes are struggling to fight against the paranormal liberation front in an attempt to protect society from the outburst of villains. It introduced Shigaraki in a new avatar after merging with All for One. There’s one question we all end up asking ourselves. Who would win in a fight, All Might vs. Shigaraki?

If All Might, in his prime, had fought against Shigarakhi (AFO), then there may not be a clear victor. All Might wouldn’t fight just with his quirk but also with all the experience he had accumulated over the years as a hero. While fighting against Shigaraki Tomuro, who has just awakened his new powers, there’s a high chance that All Might will be able to win.

Let’s discuss more and compare them based on multiple factors.

Toshinori Yagi, better known as All Might, is a pervasive protagonist of the My Hero Academia series. He is a mentor, a guide, and the previously dubbed ‘symbol of peace.’ As the 8th wielder of one for all, he stood at the top of the hero community.

We have seen him fight and prevail against multiple foes, even in injured an injured state. He has fought AFO twice, crushing his head the first time and capturing him the second time during the hideout raid arc while in a weakened state.

The Nomu at USJ’s unforeseen simulation joint was demolished by him while in the same weakened state. He also fought and defeated Wolfram in the film Two Heroes. But none of us has ever seen All Might vs. Shigaraki as the Nomu stole this opportunity from us during the USJ incident.

All Might has been able to use one for all at 100% right from when he received it, allowing him to become one of the strongest in the series.

Quirk: One For All

Who is Shigaraki (AFO)?

Shigaraki Tomura is the primary antagonist in the series. He is the descendant of the 7th wielder of one for all and inheritor of all for one. As AFO’s student, he became the leader of the villain league and currently serves as the strongest villain in the series.

Shigaraki was raised by AFO with only one motive in mind, to defeat and kill All Might. To do so, AFO mentored him throughout his life, handing him the villain league and even ensuring that he could inherit the real “all for one“ quirk.

Shigaraki has fought against multiple strong heroes throughout the series. This started with his first fight against Eraser Head and the class-A students. He even defeated Re-Destro, the commander of the meta-liberation army, which allowed his quirk to evolve.

After merging with all for one, Shigaraki was able to go toe to toe with Star and Stripe, who was America’s no.1 hero. Only to defeat her and absorb her quirk, adding to his collection of quirks.

Quirk: Decay: Tomura’s quirk allows him to disintegrate anything he touches with his whole palm. Its later evolution allowed him to destroy anything that he hadn’t directly touched.

Quirk: All For One: Shigaraki merged with the quirk allowing him to access all the other stolen quirks that have been stored within it.

A clear victor may not emerge in a battle of All Might vs. Shigaraki. In their prime, both characters wield immense power. At the same time, Shigaraki (AFO) may be able to overwhelm All Might with his wide array of quirks. All Might’s strength and stamina will support him to prolong the battle.

Everything will boil down to experience. All Might has held the quirk for close to 40 years, which is more than any of the previous ones for all users. He has fought many battles and faced unique villains throughout his career.

Shigaraki, on the other hand, is still figuring out how to efficiently use his recently inherited quirk. As a merged being, Tomura is fighting for control of his body and fighting in this mental state he may lose.

This conflicted mental state, compiled with All Might’s persistence, might result in a victory. But whoever wins will not go unscathed; they might be left with mortal wounds.

In a contest of strength, All Might should be able to beat Shigaraki AFO as OFA reinforces his body, providing him with immense strength.

Shigaraki Tomura will win in a battle of durability due to his super regeneration quirk. While All Might may get tired, Tomura can get as injured as he wants without any repercussions.

All Might, in his prime, can beat Shigaraki in a contest of speed as his quirk allows him to move at extremely high speeds. Shigaraki can counter this by using any warp quirk enshrined in all for one.

As the 8th wielder, All Might wasn’t able to harness the quirks of his predecessors. So Shigaraki’s All For One outmatches his quirk putting him at a disadvantage.

Shigaraki may have a wide range of abilities and quirks, but he is unable to use them properly. If both of them are compared based on who wields their abilities better, All Might would easily win.

In a battle between All Might vs. Shigaraki, All Might should be able to win by a slight margin due to the time he has spent as a hero. If Tomura is allowed to grow further and reach the peak of his power, All Might won’t stand a chance.

Here, we conclude our article. We will be back with new posts. Till then stay tuned with us and read the articles mentioned below.