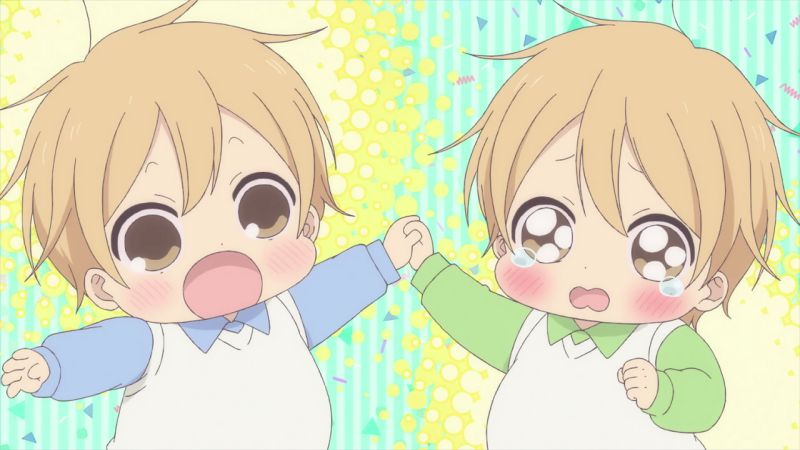 Gakuen Babysitters or School Babysitters is a slice of life anime based on the manga created by Hari Tokeino. The manga was first published in 2009 with the anime adaptation being aired in 2018.

The time period between the manga and the anime is a huge nine years with the series getting a lot of attention only after the anime’s release.

It is a wholesome family-friendly anime that can be enjoyed by people of all age groups. Currently, the anime only has one season with twelve episodes and one OVA.

The anime was received with a lot of joy and enthusiasm as the main characters did not take too long to make their way into the hearts of viewers.

Where to Watch Gakuen Babysitters –

Gakuen Babysitters is a kid-friendly show about kids. The kids making their appearance in this series are extremely cute and can even melt the hardest of hearts.

Kotaro and his older brother Ryuuichi are the protagonists of this series as Ryuuichi tries to juggle his personal life and the responsibilities of his School Babysitters Club.

The best thing about this series is that it can be watched legally on Youtube on the official channel of Muse Asia. Thus, it makes this anime easily accessible to everyone as they can stream it on Youtube anytime and anywhere.

Each of the episodes of Gakuen Babysitters has got over 3 million views on Muse Asia highlighting the popularity of the series. Moreover, fans can also watch this heartwarming series on the best anime streaming service, Crunchyroll.

The only downside is that the anime is restricted to particular regions on Crunchyroll so not everyone may be able to view its content.

Fans also need to take the help of unofficial websites like Gogoanime to view the last OVA episode which is available neither on Muse Asia nor on Crunchyroll.

As we mentioned in the beginning, Gakuen Babysitters currently has 12 episodes only with an additional OVA episode at the end. Below we will provide the release order for Gakuen Babysitters according to their particular time of release.

Where to Read Gakuen Babysitters Manga-

The anime series for Gakuen Babysitters was adapted from its manga that started way back in 2009. Its publishing began on Shojo manga by Hakusensha with the series having been compiled into twenty volumes as of now.

Ryuuichi featured in the first cover of the manga along with all the other children.

Fans can enjoy all the volumes of Gakuen Babysitters by visiting some unofficial sites like MangaKatana and MangaSee. Readers will find all the chapters listed there from the first to the last.

Below we will provide the proper release order for all the volumes of the Gakuen Babysitters manga so that it is easier for the readers to navigate them.

Although Gakuen Babysitters has only one season with 13 episodes it is always great to keep a track of the episodes and note in which order is the perfect way to view them.

In this list, we will provide our readers with the correct watch order for Gakuen Babysitters from the first to the last.

The anime of Gakuen Babysitters is a short one with each episode being only 24 minutes. We will mention the total duration of all the episodes combined so that viewers can prepare a schedule for themselves and fit the episodes into their daily routine.

Thus, as our readers can see Gakuen Babysitters is fairly easy to complete and fans can binge-watch the entire series within a day or so.

Gakuen Babysitters is a wholesome kid-friendly show about Ryuuichi and his little brother Kotaro. They became orphans after their parent’s death and were taken in by a rich old lady.

In exchange, Ryuuichi has to manage the School Babysitters club which explains the title of this series.

In his unique job of managing the babies he meets various new people who form a close bond with him. Soon the babysitter club grows and new members come joining in which helps Ryuuichi a lot.

We are also introduced to the babies’ parents one by one each of whom have a different and unique personality.

Gakuen Babysitters still has a lot of content to cover from the manga and safe to say that fans can only dream at this point.