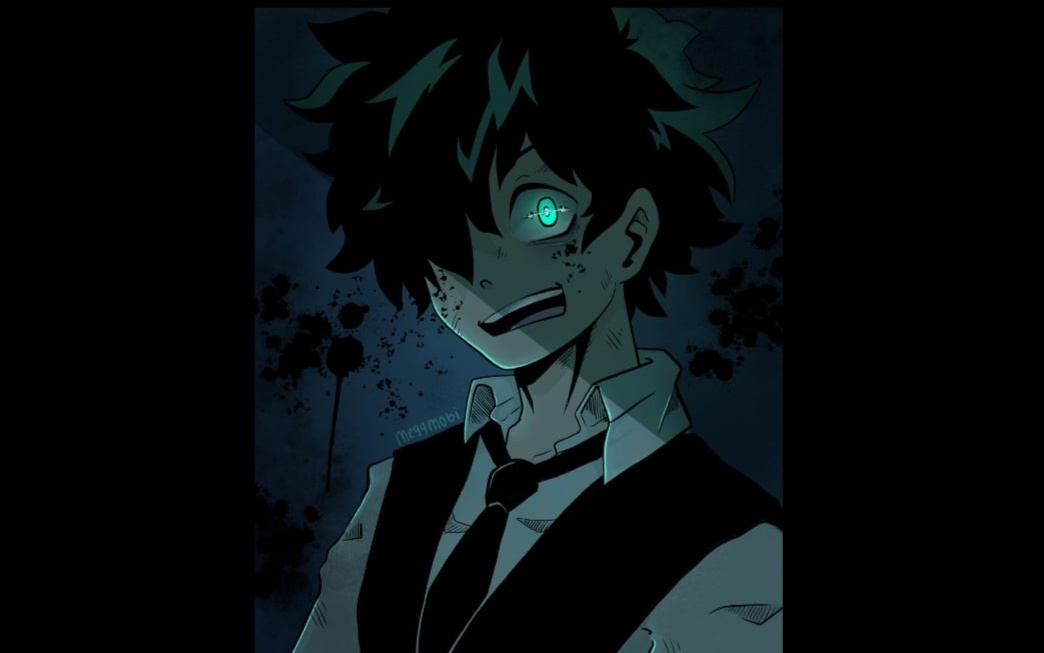 Today we bring to you an article on a fan-made webtoon titled My Hero Academia (Villain Deku) Comic Au: All You Need to Know.

The basis of this story is from the thoughts we’ve all been having: what if Deku actually listened to Stain? What if he saw the Hero Society for what it was and decided to shift sides?

Factually considering the extent of Deku’s powers, he’d be able to be more efficient if he disregarded unwanted thoughts. Of course, these ‘unwanted thoughts’ include having to worry about the city’s infrastructure and many small details that most villains ignore.

As a villain, the high-risk, high-gain vibe makes you wonder what would happen if Deku simply used his powers because he could. And the very possibility of Deku brings hope for the entire UA turning villainous.

And so, let’s get into My Hero Academia (Villain Deku) Comic Au: All You Need to Know.

While multiple alternate realities focus on different paths that lead to a Villian Deku, there is a very popular one. This one displays how quirkless Izuku is constantly bullied by his peers and then rejected by All Might.

This leads to a complete mental breakdown that results in numbness. However, like Shigaraki, Izuku is approached by All For One and is then ‘saved’ from the injustices of the Hero Society.

Following this, Deku now finds purpose as a villain and is granted power by All For One. Here too, the range and actual quirks have given by AFO vary depending on the fan-made reality.

The Villain Deku webtoon began its release on 12th October 2018. The comic focuses on a My Hero Academia parallel world that has most of UA as villains. Here, Deku reigns over them all with his cutthroat tactics.

As of 2021, the Villain Deku webtoon has a total of 8 episodes. And it has also inspired many fans to create similar fanfictions and comics.

The episodes of the webtoon begin with normal Deku getting warped into a mysterious black hole. Upon reaching the ‘other side,’ he realizes although he sees a copy of himself and his friends, something’s different.

After Deku is warped into a black hole, he is instantly met with his villain self. This villain self is flanked by Uraraka and Bakugo, who obviously aren’t their cheerful hero selves.

The Deku in this alternate reality seems to have no qualms about eliminating someone he doesn’t recognize. However, Bakugo of this reality mentions that Hero Deku is Villain Deku’s little brother, thus saving him momentarily.

Currently, another webtoon is going on regarding Villain Deku. It’s name is Illusion: A My Hero Academia (Villain Deku) AU. It has currently 51 chapters so far.

The last chapter was released on July 13, 2021. Fans can read this webtoon too, to get a glimpse of Villain Deku’s daily life and his friends.

Where to Read My Hero Academia (Villain Deku) Comic-

Since the My Hero Academia (Villain Deku) comics have multiple versions all over, the concept itself is quite famous. Thus fans can read the comic and other derivations on multiple platforms like Webtoon and Webnovel.

Also, for Illusion: A My Hero Academia (Villain Deku) AU, fans can give a try on the official website.

However, many authors post au’s on Instagram, so be sure to check them out under the hashtag of Villain Deku.

The My Hero Academia Villain Deku has grown exponentially over the years. This is probably due to the exciting breakdown of the goody-two-shoes Deku.

We all know that the only thing Deku lacks is pride in his abilities, especially when compared to Bakugo. Villain Deku, however, is cold, calculating, and confident.

Most versions display a psychotic, numb Deku whose descent into madness stems from the discrimination he faces for being quirkless. However, most fans find this version more realistic instead of the canon positive and hardworking Deku.

Even the powers possessed by Deku vary across stories. While some let him remain quirkless and then use his smartness to exact others, others let him follow the League of Villains’ path.

From the stories that showcase quirks, we’ve noted down some versions of his powers for you.

This version of Deku simply spirals into a villain due to the mental and emotional distress he faces for being quirkless. Despite not having a quirk, Deku still holds a great amount of knowledge on each hero and their quirks.

And so, he simply uses his intelligence to break through hero defenses and aids the League of Villains.

In this version, Deku’s fall from grace begins after he realizes how corrupted the hero society is. His constant disregard for himself and mental strain results in him using One For All to destroy everything.

This version of Villain Deku is the most interesting and is definitely a fan favorite. This follows the LOV path that results in quirkless Deku being given a quirk by One For All.

The possibilities and the number of quirks that can be granted all depend on the creator’s imagination. Most commonly, we see Deku with a fire-type quirk that’s as explosive and more destructive than Bakugo’s.

Other quirks include something like Blackwhip, portal creation, and mind control. All of these quirks help the LOV destroy the hero society.

Also Read – What are all of Deku’s Quirks Explained in MHA?

Most Villain Deku alternate realities that have links to the My Hero Academia main story. Kindly note that the abilities noted below vary across stories.

As displayed in the main series, Izuku has high intelligence. He is smart enough to make observations and notes about quirks and their working purely through observation.

Furthermore, he can use his surroundings to his advantage. He can also easily turn a hero’s quirk against themself.

This ability is more prominent in the quirkless Villain Deku au. Considering that he can only use his intelligence as his main weapon, he trains his body to achieve better results.

In the All For One au, this is the ability that is the be-all and end-all of a series. With multiple quirks like those of fire types and mind control backed by a trained body, Villain Deku becomes almost unstoppable.

As a hero or villain, this ability is very important. Especially on solo missions against pro heroes. In most series, Deku is too numb to have a normal level of pain tolerance and thus can partake in prolonged fights.

As mentioned in the main series, Deku always follows through with his promises once he sets his mind to them. So when Villain Deku decides to exact revenge, his determination and will does not waver.

This is especially heightened by the fact that he has nothing to lose and the consequences do not matter to him.

The result of this should be obvious: Villain Deku. Despite being able to use One For All, Deku’s main aim as a hero will be to save people. This is a weakness.

Villain Deku will not hesitate to use underhand tactics and thus can easily take control of the situation. Further, if this version of Villain Deku has multiple quirks from AFO, they might not be as strong as OFA.

However, his risk-it-all method of doing things and lack of regard for life will grant Villain Deku the upper hand.

Q1. Is villain Deku in the show?

Ans – No, Villain Deku is not part of the main My Hero Academia series.

Q2. What episode is villain Deku in?

Ans – Villain Deku is not part of the main My Hero Academia series.

Ans – All we know is that Deku’s dad works abroad. So assumptions of him being a villain cannot be addressed until official confirmation is received.

Ans – Evil Deku or Villain Deku is a fanonically created character who decides to take revenge against the hero society.

Ans – The many versions of Evil Deku can be read on Webtoon.

Q6. Who is Villain Izuku Midoriya?

Ans – Villain Izuku Midoriya is a fan-made character that deserts his hero role to join the dark side.

Ans – No, Villain Izuku Midoriya is not part of the main My Hero Academia series.

With this we conclude with our article on My Hero Academia (Villain Deku) Comic Au: All You Need to Know.

We hope to have cleared any doubts. We’ll be back with an interesting article for you so until then stay safe, stay tuned, and stay hyped.