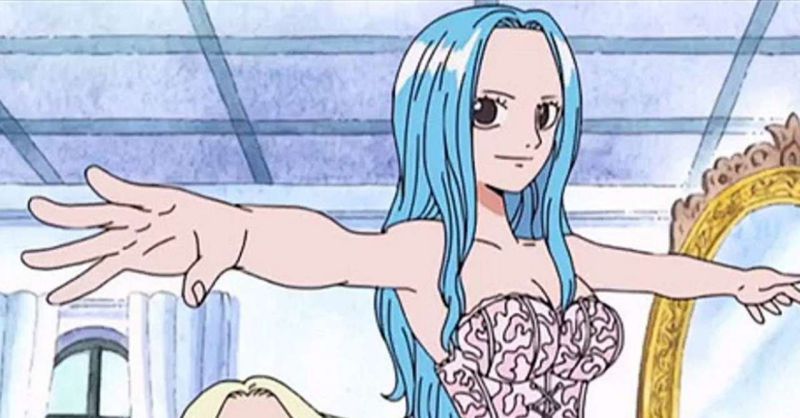 One Piece stands out among the rest of the anime series due to its insane amount of characters.

The female characters in One Piece are some of the most brilliant and beautiful characters that we have seen till now.

On that note, today, we will be ranking the top 15+ hottest female One Piece characters.

This is going to be a pretty exciting list with the top half of the ranking all but confirmed.

There are a lot of characters to choose from in the bottom half, and we have to wait and see who is going to miss out. So, let us start with our hottest One Piece female characters.

Koala is like the female counterpart of Sabo, with her appearance and dressing style closely resembling him.

She is a sweet girl who is sometimes known to lose her anger quite easily.

She cares for her mates from the bottom of her heart and can make mature decisions.

She is quite tall with fluffy orange hair. Her attire comprises a pink-colored shirt with a maroon skirt.

She is also seen wearing high-heeled boots with a pair of black stockings. Like Sabo, she likes to wear her goggles on her forehead surrounding her cap.

We met Perona during the Thriller Bark Saga, where she was affiliated with Gecko Moria.

She loves the color red, which complements her pink hair. She is usually seen tying them into two pigtails with colorful hairpins.

She also wears a crown with a white shirt and a red skirt. Her accessory includes a red umbrella that she occasionally uses in fights.

Her childish and bubbly nature also adds to her overall cuteness.

Tashigi is a captain in the Marines who makes the other marine officials fawn all over her.

Such is her beauty that whenever she appears on the scene, all the eyes are locked on to her.

She loves wearing floral patterned shirts with a jacket over them.

Also, being a prominent sword fighter, she carries her sword everywhere along with her.

Moreover, she has an uncanny resemblance to Zoro’s childhood friend, Kuina.

In addition to her floral shirt, she sports a pair of blue jeans and black shoes. She also wears a pair of glasses which brings out her elegant look even more.

Rebecca was introduced for the first time during the competition for the Mera Mera no Mi.

She has a pale skin color, with her height being average for a person.

She likes to keep her pink hair tied in a medium braid and dresses gracefully as an attendant to Lady Viola.

She has a simple outfit comprising of an orange dress with large frails.

During the tournament, she adorned a metallic armor plate along with a sturdy helmet. This makes her a strong contender for one of the sexiest One Piece characters.

The fiancee of our favorite cook is bound to take her place on this list. Charlotte Pudding hailed from the family lineage of Big Mom and ran a cafe on Cacao Island.

She is a gracious lady with mesmerizing eyes and beautiful lips. Comparatively, she is a bit shorter than the other female characters.

Her light brown hair is normally tied into two pigtails behind her.

Since she is a descendant of the Three-Eye Tribe, too, she has a third eye on her forehead, which is her most distinguishing feature.

She loves the color pink, which is evident in most of her outfits.

Baby 5 is a character who was introduced as an antagonist but later sided with the straw hat pirates.

Baby 5 has a curvaceous body and is definitely one of the hottest One Piece characters.

She wears her lipstick boldly, and her maid outfit with high-heeled shoes make her stand out among other female One Piece characters.

Her accessories include a large rifle, an axe, and a sword which confirms her skills as an assassin.

Someone who can even make the great Oden fall in love has to be naturally beautiful.

Kozuki Toki was an embodiment of grace and purity as every step she took was filled with honor.

She was extremely pretty with captivating eyes and light green hair.

Her outfit comprised of her characteristic pink kimono with the symbol of the Kozuki family at the bottom.

She also carried a Katana with her and was a talented fighter.

Hiyori precedes her mother in the 10th place in this list. Just like her mother, she was extremely pretty and had the same beautiful set of eyes.

She has decent height with a slim figure.

Her long hair and blue eyes are enough to capture the heart of any male character in the series.

She loves to style her hair with a variety of flowers and pins.

Her characteristic outfit consists of a red kimono with a floral pattern.

The fact that she is widely regarded as the prettiest woman in Wano further speaks in her favor.

Her beauty shone so brightly that people couldn’t look directly at her.

Yamato is the daughter of one of the Four Emperors, Kaidou. The only similarity that she has with her father is a pair of horns sprouting from her head.

Her unique style also makes her stand out among other female One Piece characters.

She is extremely tall with long white hair that she keeps tied into a ponytail behind her.

She has a unique sense of style which is prominent from her two gold earrings.

Her usual outfit consists of a sleeveless white dress with hakama pants and sandals, much like Oden.

She also prefers to wear a hannya mask to conceal herself from others.

There is no way we are completing this list without mentioning Sanji’s sister as one of the hottest One Piece female characters.

She has a great sense of style and an affinity for the colour pink.

She has a slender body with purple eyes. She has also got the number 6 tattooed in her two thighs which makes her even more hot.

Her bandana around the neck is blue in colour and her dress makes her appear like a butterfly.

The most beautiful and current princess of Dressrosa is no other than Viola. She is one of the hottest girls who fell for Sanji.

She ate a Paramecia devil fruit, Giro Giro no Mi, which grants her power to see through solid objects.

She is a tall, slender, and light olive-skinned woman who loves to dance.

The princess of the Arabasta Kingdom is the first name on the list as we slowly enter the top 5.

Being a princess, she has a gorgeous appearance and had already caught Sanji’s eyes since her introduction.

She wears blue earrings, which are the same color as her long silky hair. She is a very cheerful girl and brings a whole lot of positivity around.

Her typical outfit has changed quite a lot throughout the series, with the most notable one being her pink dress. She also loves wearing high-heeled shoes.

Robin is the first of Luffy’s crewmates to be featured in this ranking.

Not only is she mesmerizingly beautiful, but she is also a skilled fighter with her powers.

She is quite intelligent and one of the very few people in the series who can decipher the poneglyphs.

She also has a great fashion sense and had a typical cowgirl look before the time skip.

The epitome of beauty, Nami has been with us since the beginning of the series.

She is an energetic and sweet girl who has grown quite a lot as a character. S

he has long orange hair that she usually keeps tied in a ponytail at the back of her head.

Her pale and slender body had made her a favorite among the male readers since her introduction, and as time passed, she has just grown even more beautiful.

One Piece has a diverse set of characters, and this list will be incomplete without the mention of the most beautiful mermaid, Shirahoshi.

Apart from being a mermaid, she is also the princess of her kingdom and has attractive qualities, just like a princess.

She is huge in size and larger than her mother and brothers.

Her long wavy pink hair is one of her most gorgeous features, along with her long striped tail.

She is widely regarded as the most beautiful woman in the Ryugu Kingdom, and her beauty even challenges that of Boa Hancock.

The first place in the list and the hottest female character in One Piece is none other than our fan-favorite Boa Hancock.

There is no debate regarding the fact that she is the most beautiful character in the series, and very few can keep their mind in one place on seeing her.

Her Devil Fruit power also complements her gorgeous features as she can turn anyone into stone, who attracts on her.

Her tall, slender figure with long black hair are just a few of the attractive qualities that she possesses.

Must Read- Best One Piece Theory of 2022 | True History

Black Maria just misses out on our top 15 list, and as a result, we are putting her in our special mentions.

She is a young woman of very tall height. Although she is not huge like Shirahoshi, she is almost as tall as Kaidou.

Similar to Yamato, she has red horns sprouting from her head. Her attire consists of a dark kimono with floral patterns with a smoking pipe as an accessory.

Carrot is the other one who gets a shout in the special mentions as a hot One Piece character.

In Sulong form, her most noticeable feature is her long floating snow-white hair. She has large ears with glowing red eyes.

Her fur is also comparatively thicker and gives her a snowy appearance.

Must Read: Top 15 Hottest Male Characters in One Piece (Ranked)

This list is full of the hottest One Piece characters (female) that have excelled in terms of their beauty.

Some of them are also skilled fighters and have taken down many powerful characters in the course of the series.

Shirahoshi could have acquired the first position if not for Boa Hancock’s indisputable beauty, who is the hottest One Piece character.

We will be back with our readers with another top 15 article. Stay tuned for more.